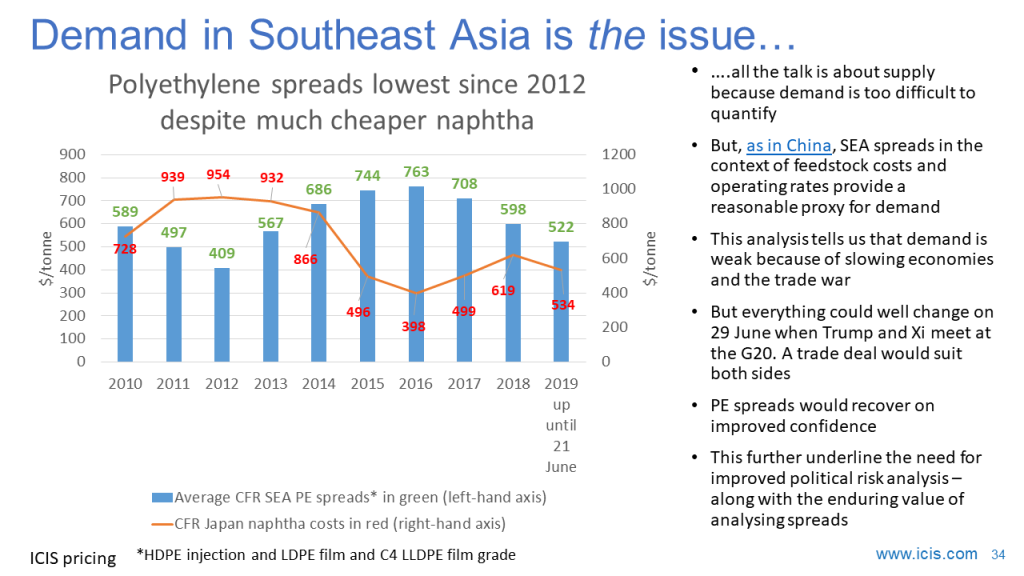 THE GOOD news today is that the US and China have agreed to resume trade talks. Presidents Trump and Xi are also scheduled to meet at the G20 meeting in Osaka, Japan, on Saturday – 29 June – to discuss the trade dispute.

If a trade deal is done, or at the very least President Trump agrees to halt imposition of further tariffs on China, then polyethylene (PE) spreads over naphtha could well rise. Improved confidence is likely to encourage buyers to acquire more resins.

This will confirm my argument that the current malaise in markets has little to do with new capacity coming on-stream. This year’s new supply has been known about for a long time. What is instead the problem is demand. But because demand is so difficult to quantify, market participants are talking about supply as they still need something to talk about.

How do we know that demand is the problem when demand is so difficult to estimate? The old-fashioned approach of studying spreads, relative costs of naphtha operating rates give us the answer.

But this is not in keeping with our estimate for SEA PE operating rates of 86% in 2019 – quite healthy. We compiled this estimate at the end of last year and since then new supply hasn’t arrived quicker than we had expected. In fact, instead, the start-up of one major new complex – PETRONAS’S RAPID – has been delayed.

2019 spreads tell us that if things continue as they are, our 2019 operating-rate estimate will be wrong because we have overestimated demand:

Also consider this:  Spread analysis needs to be conducted along with improved political analysis. In this new era of anti-globalisation, politics are playing a major role in shaping demand.

PREVIOUS POST Global polyethylene: Supply is not the problem, it is demand
NEXT POST US LLDPE imports and the impact on European petrochemicals