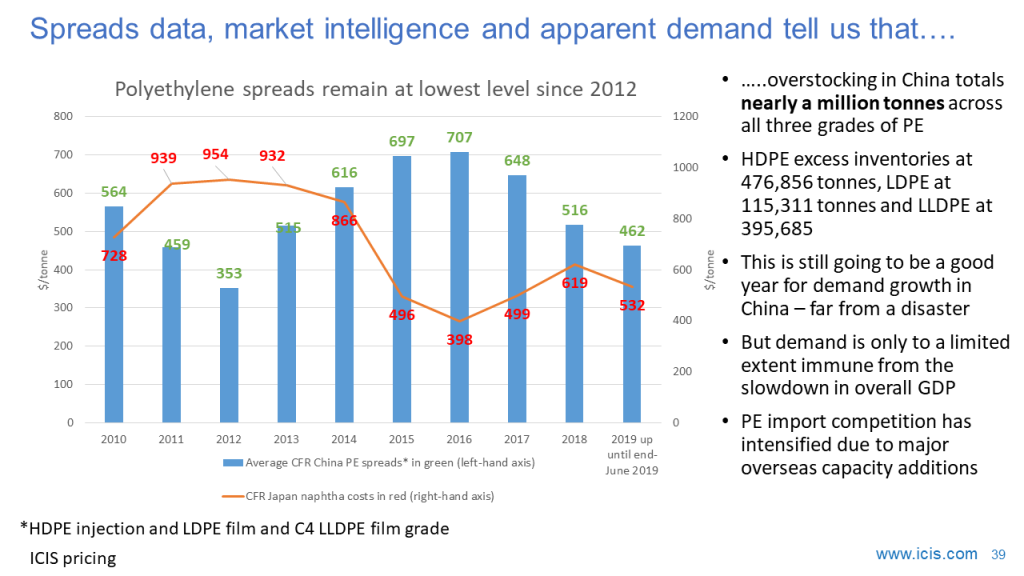 MEASURING petrochemicals and polymer inventory levels in China with any reasonable degree of accuracy is an impossible task. Nobody can quite obviously count every single plastic pallet in every warehouse up and down China’s vast distribution chains.

Sinopec and PetroChina do, however, report their inventory levels. This is at least something and has a significant value.

Their reports on stock levels have the habit of moving the various Chinese futures markets, reflecting their huge role in the market. This was the case today when LLDPE futures prices rose by 2.3% on the producers announcing that their combined PE and PP stock levels were comfortable.

There is another approach to assessing inventories that also has value. This starts with studying spreads between China’s PE prices and naphtha feedstock costs. The lower the spreads the lower the producer pricing power.

Step Two is to add ICIS estimates for monthly PE production in China to net import numbers from the China Customs department. This will give you apparent demand.

These increase are above our latest forecasts for full-year 2019 PE real demand growth. Real demand is apparent demand adjusted for inventory distortions. We expect HDPE real demand to rise by 7.6%, LDPE by 7% and LLDPE by 8.3%.

This indicates the intense competition taking place in the Chinese market as a result of major overseas capacity additions.

Clearly something is out-of-kilter. Either we have underestimated this year’s demand or the January-May data point to substantial overstocking. The latter seems to be the case because spreads are telling us that producers lack pricing power.

Evidence on the ground suggests another year of good demand growth, but nothing like 16.8% for HDPE and 14% for LLDPE. This is Step Three – adding judgement based on your relationships with the market.

My personal view is that we have overestimated this year’s real demand growth by around two percentage points in each of the three grades of PE.

China’s PE demand is to only a limited extent immune from the slowdown in overall GDP growth.

The trade war is far from over despite the G20 truce. Concerns over the trade war will continue to damage Chinese consumer confidence as will the domestic war on bad debt. China has reduced shadow lending by $2 trillion over the last two years. Credit conditions will remain tight relative to 2009-2017.

Chinese exports of finished goods have seen slower growth this year. This is commonly thought to be mainly the result of the trade war. But I am beginning to think not, for reasons I shall explore in later posts.

But export growth is undoubtedly down, whatever the reasons. I expect this trend to continue as the global economy further decelerates. China’s exports are again packaged in PE.

A lot of hope was expressed at the beginning of this year for a boom in Chinese demand for HDPE natural gas and water pipes required for a major new wave of infrastructure spending.

But growth in infrastructure spending decelerated in the January-May period to 4% from 4.4% in the first four months of the year. In previous years, the rates of increase were in the double digits.

Provincial governments, which carry out most of China’s infrastructure projects, are heavily indebted and have seen their revenues fall because of tax cuts. This suggests that HDPE pipe demand is not as strong as had been expected.

Divide 14.5m tonnes by 12, multiply five and you get January-May demand of around 6m tonnes. As mentioned earlier, apparent HDPE demand in January-May was 6.5m tonnes. When you look at the exact numbers this implies HDPE overstocking of 476,856 tonnes.

Using the same process as above, I estimate LDPE excess inventories at 110,600 tonnes and LLDPE overstocking at 395,685 tonnes.

Add these three numbers together and you end up with excess inventories across all the three grades of PE of 987,852 tonnes – nearly a million tonnes.

The judgement factor is obviously very important here. You may disagree with my estimates for full-year growth.

But why are spreads at multi-year lows then? The pricing and feedstock cost data seem to be telling a very clear story in the context of the extraordinarily big jump in January-May apparent demand.