Multiple trade disputes and the risks for the US PE industry

FALLING out with a trading partner as big as China is problematic enough. But the US is also out of sorts with the EU, India and Turkey and is at risk of ending up in a dispute with Vietnam.

The row with China is far from being resolved despite the G20 truce. Ninety percent of a trade deal might have been completed, but the really hard bit will be the final 10% as the US and China remain a long way apart on the issues of intellectual property rights protection and Chinese state subsidies for manufacturing. Compromises may well be impossible because President’s Trump and Xi have to keep their domestic supporters happy.

Then there is the dispute with the EU over airline subsidies, a trade war with India following the US decision to withdraw trading privileges and various geopolitical disputes with Turkey, the latest of which relates to the Turkish decision to buy Russian defence equipment.

Vietnam was singled out by President Trump last week as “almost as bad” as China on trade because of a surge in Vietnamese exports to the US. Since then it has emerged that much of this increase involved transhipments – Chinese exports shipped to Vietnam for minimal reprocessing before being moved to the US. In so doing, China avoided US trade-war tariffs.

Illegal transhipment of Chinese goods had also taken place through Malaysia and the Philippines, said a US Customs Department spokesman quoted by the Wall Street Journal. The customs department continues to investigate.

The transhipment trade is said to be worth several billion dollars and seems to have bypassed most of the US tariffs on Chinese imports. This brings into question President Trump’s assertion that the Chinese economy is “going down the tubes” because of the trade war.

Politics, politics and politics. Over the last three years these have become the three most important things you need to consider where assessing petrochemicals and polymers trade flows.

If you don’t believe me, take a look at the above charts. They compare the eight months from January to August 2018, before China imposed its 25% tariffs on US HDPE and LLDPE cargoes, with the eight months afterwards – September 2018 to April 2019.

The US was able to compensate for a fall in exports to China through big gains in other markets, most notably in Belgium (a distribution hub for Europe as a whole), Vietnam, Turkey India and Malaysia.

But what if US disputes with these other regions and countries escalate into tit-for-tat tariffs, including on US PE? In the case of Turkey, it could be more that its economy further contracts as a result of US sanctions. What then for US PE export trade and the economics of its big investments in new capacity? In this context, here are some alarming numbers:

Perhaps, though, the differences between the US and China are not as intractable as I’ve described above. Maybe the US disputes with everyone else will be resolved whilst the US also backs away from any further confrontations.

But if even this were to happen, the disagreements point to a long term shift in politics. In the US, Britain, Hungary, Poland and elsewhere politicians are questioning the value of globalisation. We are as a result heading towards a much more fragmented world. So much for Francis Fukuyama’s End of History and the triumph of Western liberal democracies as “the final form of human government”.

PREVIOUS POST China PE overstocking at nearly a million tonnes as demand weakens, competition intensifies
NEXT POST BASF's shocking Q2 results should have been no shock at all

BASF's shocking Q2 results should have been no shock at all

y John Richardson NOBODY should be surprised by the BASF results for Q1 2019 whe... 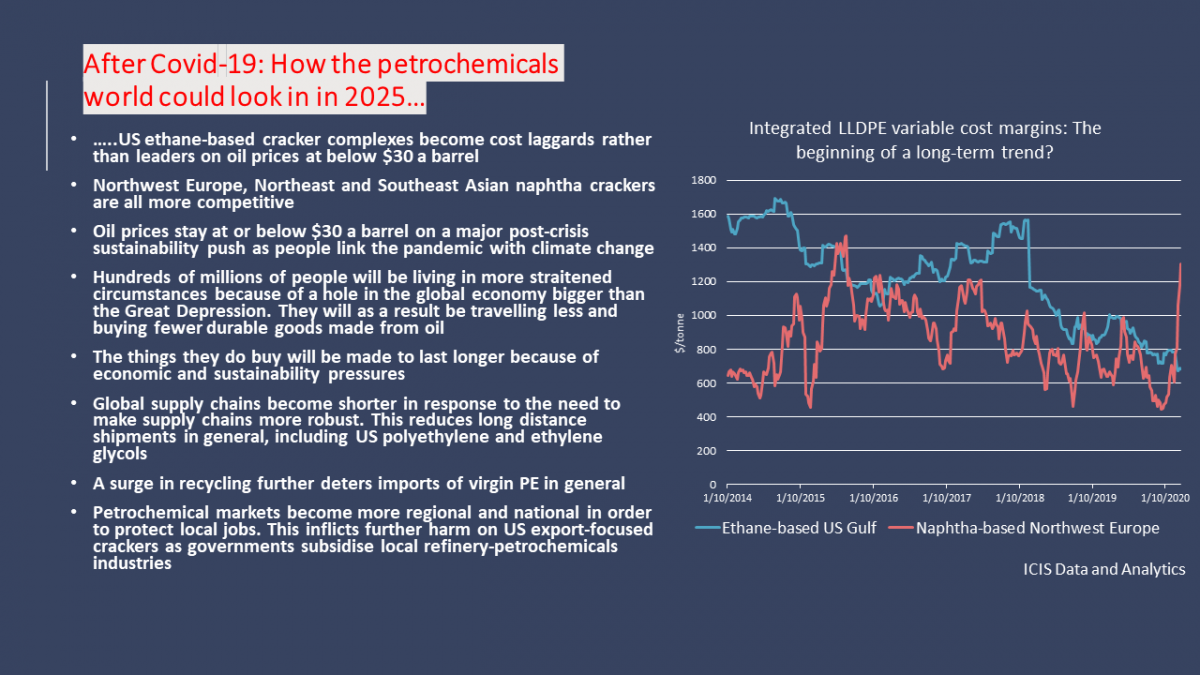