How sustainability will upend the petrochemicals cost curve, creating new winners and losers 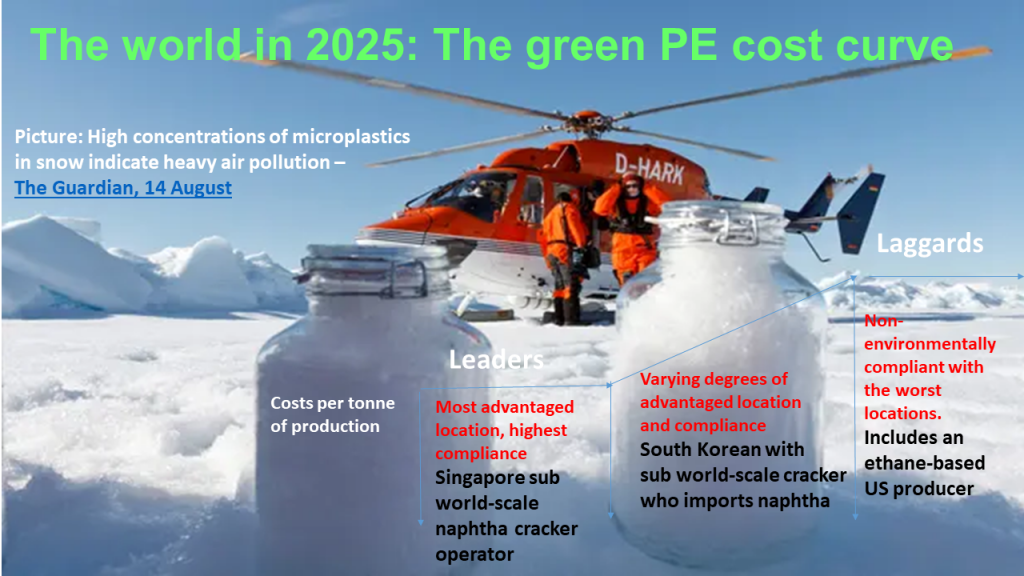 THE FUTURE I described on Wednesday, of declining petrochemicals and polymers demand growth as the Millennials reshape consumer markets, is only doom and gloom if you let it be doom and gloom. This represents a fantastic opportunity for companies in our industry to entirely reshape their strategies and emerge as winners.

Gone must be the notion that success rests on building wave after wave of big new petrochemicals complexes located anywhere. There will still be a need for capacity growth to meet demand. But capacity additions need to be more modest to reflect the new realities of demand. Location will become of critical importance for existing and new investments.

Of equal importance will be how successful companies are in mitigating the “externalities”, the environmental damage they cause. They won’t have any choice. Over the next few years I believe we will see major new global environmental legislation.

The temptation is to sit back and think nothing will change in a hurry. But this thinking isn’t based on the evidence of the profound societal changes already underway. By 2025, the EU and other supra-national and national bodies could well have introduced global legislation which will have reshaped the cost curve.

Let’s take PE as an example of how the conventional cost curve, which measures production costs, works today.

To the far right of the cost curve are the PE players who lack their own crackers and have to buy-in ethylene delivered by ship. These are in the most disadvantaged position with the highest costs- per-tonne of production.

This is a highly marginal business and only works when the spot ethylene price is sufficiently less than the PE price. Quite often, the ethylene spot price is above the PE price and so these plants shut down. This business model accounts for less than 5% of global PE production.

Viable businesses at several points along the middle portion of today’s cost curve are PE businesses which buy-in ethylene delivered by pipeline. There is nothing economically wrong in being short of ethylene and being linked by a pipeline, where ethylene can be delivered without the cost of liquefaction. Ethylene moved by ship has to be liquefied by being frozen, which is expensive. Pipeline prices for ethylene are usually on contract terms much cheaper than spot prices.

Farthest to the left of the liquids feedstock players are the oil and gas producers which operate crackers with mixed-feed technologies. Players such as ExxonMobil don’t always crack naphtha and LPG as these have high value in external markets. They instead crack low value refinery streams such as fuel oil, other heavy ends, paraffin wax, and even crude oil itself.

Then come the advantaged feedstock players, the ethane cracker operators, which have the lowest costs of production and are most to the left of the conventional cost curve.

This is the comfortable, familiar and safe world all of us have grown up with. My chart at the beginning of this blog post suggests a radical change over the next few years.

Farthest to the right of the new cost will be the liquids and ethane players which are in the worst locations and have done the least to mitigate externalities. This will be regardless of their levels of scale, integration, feedstock flexibility and feedstock advantage.

Let’s think of a theoretical example here. Imagine a Texas-based US cracker-to-PE player integrated upstream to its own natural gas production. Today it is amongst the second-most cost efficient group of producers, only just behind those in Saudi Arabia. But this will not necessarily be its position in 2025.

The world has split in two trading and geopolitical zones, one led by the US and the other by China.

With the US are a few other countries led by political populists who reject the science of climate change and have rolled back environmental legislation. These countries have done little, or even nothing, to address the plastics rubbish crisis.

Also in the US bloc are countries that have sided with the US because of the US military security umbrella. But these countries have joined with global initiatives on climate change and plastics rubbish.

In the China-led bloc are most of the developing world and the EU. The EU has taken the lead in establishing a new set of globally enforceable environmental regulations in response to pressure from its Millennials.

China is the lead country supporting the EU as a way of placing economic pressure on the US. China is out to win trade, cold and technological wars with the US. Supporting the global green initiative also fits with President Xi Jinping’s China Dream, his promise to create a more sustainable and so harmonious society.

The Texas-based PE producer can of course do nothing about the approach of its Federal Government.

But it has made its position much worse by failing to take responsibility for the final disposal of the plastic pellets that it sells, say the legislators. The company has not invested in any initiatives to reduce plastics pollution from the the 10 rivers, all in the developing world, which are responsible for  about 90% of the plastic rubbish in our oceans.

The producer is a long way from the booming end-use markets in Asia and Africa and so incurs environmental penalties for the greenhouse gases emitted during long distance shipment.

It is seen as having done little, if anything, to work with converters, consumer goods companies and retailers to redesign packaging in order to reduce virgin resin content and raise its recyclability.

Investment is also perceived to have been low or non-existent in recycling technologies. The technologies remain a long, long way short of meeting 2025 demand. Many technical and economic barriers still have to be cleared because of the absence of breakthroughs equivalent to US shale-oil and shale gas technologies. But that’s not the point. The point is instead failure to show evidence of taking on the challenge.

Moving back upstream, the company is also seen as has having failed to do enough to reduce fugitive methane emissions, the accidental release of methane during natural gas during production. Methane is roughly 30 times more potent as a greenhouse gas than CO2. The producer is viewed as having taken insufficient measures to reduce CO2 emissions at its cracker-to-PE complex.

The company faces such heavy environmental taxes, or a lack of environmental credits, that is at the far right of the new cost curve – even though its ethane feedstock costs remain very low. It is unable to cost effectively export to the China-led economic and geopolitical bloc where all the significant demand exists.

Now let’s think of another imaginary example – a PE producer somewhere the middle portion of the new cost curve.

The producer is based in South Korea. South Korea has joined the US-led bloc because of its dependence on US military protection. But the South Korean government remains part of the Paris Accord on climate change. The Blue House supports the EU-led global regulations on plastic rubbish.

It has done quite a lot to reduce CO2 emissions at its plants. The producer has also invested in one project in Indonesia which provides a rubbish collection service, and a landfill site and a recycling plant in a community which used to have to dump its plastic rubbish straight into the sea.

The producer is also lucky because South Korea is very close to the biggest PE import market in the world, which is China. This makes its CO2 emissions from shipping to China relatively low.

It, though, has a sub world-scale cracker and has to import naphtha. But the producer’s reasonable location and actions on the environment place it firmly in the middle of the new green cost curve. Its environmental taxes or low, or environmental credits high enough, to give it a major advantage over our Texas PE player.

Then comes our most advantaged player, who is say in Singapore. The company is in an excellent in location as the whole of Southeast Asia is part of the China-led geopolitical and trading bloc. It is quite a long distance from China, but this disadvantage is overridden by membership of the right bloc.

The company has also done everything the regulators want in meeting environmental regulations, placing it to the very far left of the green cost curve. This is despite its feedstock being naphtha and its cracker being sub world-scale.

This is a tough change of mind sets for petrochemicals companies. Chemicals engineers like to build big things, business planners have spent their entire careers in an era of constantly booming demand and shareholders and financiers are comfortable with the way the world works today. But mind sets have to change.