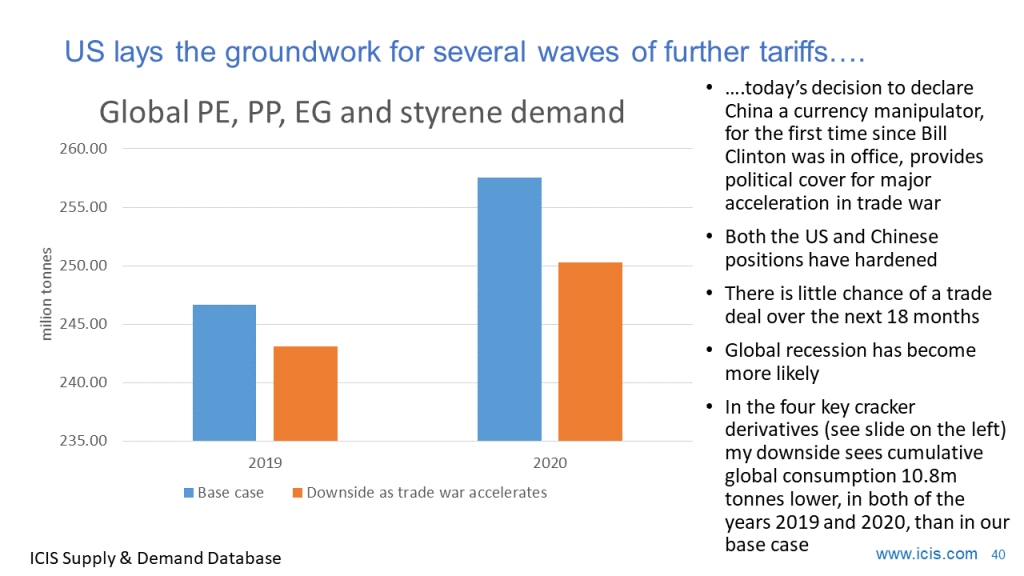 BY PLAYING with fire President Trump has very likely set the forest on fire. Today’s  decision by the White House decision to declare China a currency manipulator makes a global recession even more likely than it was yesterday, when I discussed the negative economic results of the president’s plan to levy 10% import tariffs on a further $300bn worth of Chinese imports.

Categorising China as a currency manipulator for the first time since 1994 is seen by analysts as giving the US political justification to impose more tariffs on China – in other words, it lays the basis for the 10% additional tariffs that could be implemented from 1 September. It also gives the US cover to perhaps impose even more tariffs on China.

But is the currency move justified? Not according to Marc Chandler, chief market strategist at Bannockburn Global Forex. He told today’s Financial Times that the decision would not “stand up in the court of public opinion”.

He added: “Many people in foreign exchange markets accept the idea that the People’s Bank of China [PBOC] has been leaning against the wind. They are not driving the currency down but just accepting market forces.”

Whether it was currency manipulation or market forces, the Yuan has fallen below seven to the US dollar, its weakest level in a decade.

The official response from China echoed Chandler’s comments. China does “not engage in competitive devaluation, and [does] not use the exchange rate for competitive purposes and [does] not use the exchange rate as a tool to deal with external disturbances such as trade disputes,” POBC Governor Yi Gang was quoted as saying in today’s South China Morning post. The PBOC is China’s central bank.

The truth of the matter, in my view, is a relative side issue. What instead matters is that both the US and China have over the last few days moved further away from a trade deal. This is the result of a more hawkish approach by the White House with the tone of Beijing’s commentary in its state-owned press suggesting a hardening of its position. The chances of a deal before the next presidential election now seem vanishingly slim

The Wall Street Journal is coming into line with my long-held view. James Mackintosh writes in today’s issue that “there’s a rising danger that we are entering an era of de-globalisation that will rip apart the stock prices of many multinationals”. De-globalisation won’t just rip apart share prices but economic growth in general, leading to as, as I said, the high probability of a recession.

As I said yesterday the core of the problem is this:

The US economic attack on China represents an economic attack on the rest of the world. This is what the data indisputably tell us. No matter what your politics, it is important to accept that the president’s approach to China carries enormous risks.

From oil and gas to petrochemicals, autos, TVs, washing machines, refrigerators, fast food, high-end luxury goods and overseas travel, you name it, China is the most important market in the world. Hence by trying to force the Chinese into concessions through weakening the Chinese economy, the US is threatening the biggest source of global economic growth.

There will still be those who claim that this is just a minor bump in a road of strong US and global economic growth. Here are three challenges to this view:

The effect on petrochemicals markets

Northeast Asian spreads between naphtha feedstock costs and pricing for many major products, including PE, ethylene glycols (EG) and benzene, have already at multi-year lows in 2019 before the trade war escalated.

This is despite naphtha being relative cheap compared with previous years. The weak spreads show that demand is weak, and that when people talk about supply-driven problems they are confused. Even in petrochemicals where supply is not long spreads had weakened. This proves that demand has to be the issue.

You should expect that the escalation of the trade war will drive spreads even lower. Watch this space as I monitor the performance of spreads – the best proxy for profitability – over the next few weeks.

This of course guesswork on my part. Nobody knows what will be the effect of the escalating trade war. But one thing is clear: unless both sides soften their positions and there are significant compromises in both Washington and Beijing, the consequences will be severe. There seems little chance of these type of compromises taking place over the next 18 months.