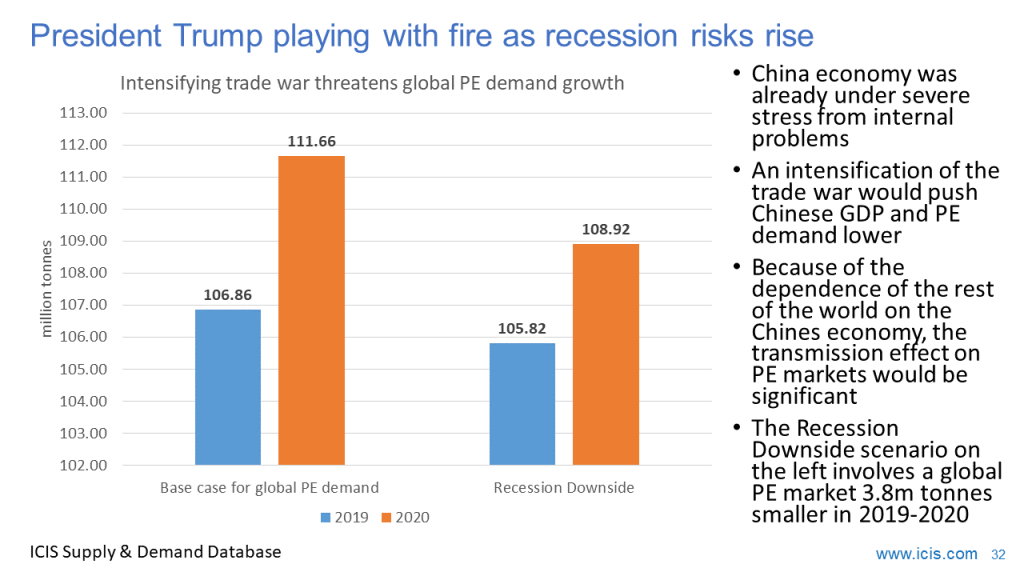 PRESIDENT Trump is playing with fire as a result of his plan to impose 10% import tariffs on a further $300bn of Chinese imports. This threatens to push the world into a global recession. (I hope you took notice when I warned you to expect very little from last week’s trade talks).

The president could be calculating that he can boost his anti-China and anti-free trade support by imposing more tariffs on China and in so doing boost his 2020 re-election chances. He may be thinking that if Joe Biden is the Democratic nominee, a tougher anti-China and anti-free trade stance will reap major dividends as Biden is the only free trader amongst the Democratic nominees. The latest opinion poll shows Biden holding a two-to-one lead over his nearest contender in the race for the nomination.

But this could backfire on Trump if the world enters a recession and he gets blamed for it. The signs are not good. As John Kemp wrote in this Reuters’ article, published immediately after Trump’s latest tariff announcement: “Unless the two governments can change the trajectory of their trade and economic relationship, a global recession now appears more likely than not – which is the consistent message from oil, bond and equity markets,”

Supporters of Trump’s approach argue that even if the additional 10% tariffs are imposed, the damage to US GDP in percentage terms will still be very small. This misses the main three points, which are:

No more rebalancing of PE markets

China imposed 25% tariffs on US imports of HDPE and LLDPE in August 2018. This has had very little negative impact on US producers as they have been able to raise shipments to markets other than China. Strong gains have been made in markets such as the EU, Vietnam, Turkey, India and Malaysia as exports to China have fallen.

The gains in alternative markets have been made possible by a healthy global economy. But if a global recession happens then of course global PE demand would weaken, possibly making it much more difficult for the US to compensate for loss of market share in China.

There is another scenario, though. The US has an extremely strong feedstock cost position. In a lower-growth world it might maintain export volumes to markets outside China at the expense of less cost-advantaged local producers. These producers might eventually successfully lobby their governments for safeguard or antidumping duties against US material.

Whatever the outcome, in the event of a recession there would be no more the rebalancing of HDPE and LLDPE markets that we have seen in September 2018-July 2019. Reduced US ability to export to China would cause major disruptions elsewhere.

Tariffs likely on US LDPE

US LDPE cargoes were exempted from the additional 25% tariffs that China imposed last August. LDPE is an obvious target for China as it responds to the latest Trump tariffs. As with HDPE and LLDPE, the US is undergoing major capacity expansions in LDPE. LDPE represents another opportunity for China to hit the US economy where it hurts.

The US would try to divert LDPE cargoes to markets other than China in the event of tariffs. But, as with HDPE and LLDPE, lower economic growth would make it harder for these other markets to absorb US LDPE.

In the chart at the beginning of this blog post, I have lowered Chinese PE demand growth to 6.8% in 2019 from our base case of 7.8% with 2020 growth falling to 5% from 6.6%. I then assume that growth across the rest of the world will fall by the same percentage amounts. This results in global demand 3.8m tonnes lower than our base case in 2019-2020.

The strength of the transmission mechanism from weaker PE demand growth in China to the rest of the world reflects China’s importance as a source of global consumption. In 2019, we expect that China will account for 31% of global demand, up from just 10% in 2010. China has also become the biggest market for everything, from oil and gas through to autos, smartphones, washing machines and TVs.