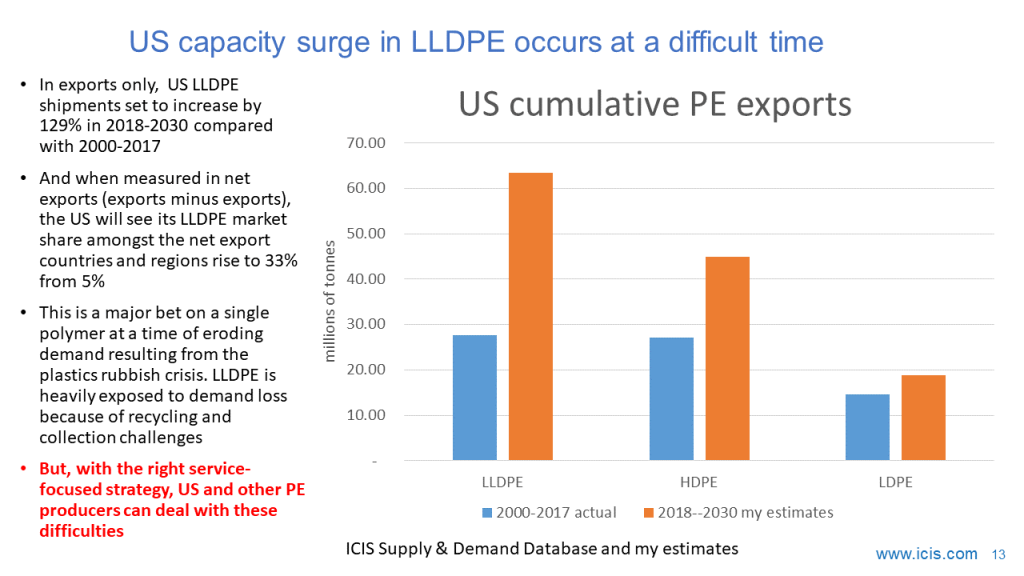 IT IS a remarkably single product-focused strategy given the exposure of linear-low density polyethylene (LLDPE) to demand erosion from the global plastics rubbish crisis.

Looking across the three grades of PE, the US will end up with a 33% global share of net exports (exports minus imports) amongst the world’s net export countries and regions in 2018-2030, up from just 5% in 2000-2017 – the period before the big capacity build-up began.

In theory, the rise in US LLDPE net export market share to 33% in the 2018-2030 will give it considerable pricing power, second only to the Middle East which will see its dominance of global supply considerably diminish.

But, as I said, the problem is demand. A great deal of LLDPE goes into single-use packaging applications such as films that contain layer upon layer of different grades of polymers – usually LLDPE and polyethylene terephthalate (PET) – along with aluminium.

(The same challenges also apply to LDPE which goes into many of the same applications as LLDPE. But, as you can see from the data, the US hasn’t made as big a bet on LDPE.)

Because of these multiple layers, recycling is right now often impossible. The same goes for flexible pouches which are again made from LLDPE, other polymers, aluminium and sometimes also cardboard.

It might be possible to redesign films and flexible pouches so that they are all produced from only one type of polymer with no use of aluminium and cardboard. But the technical challenges are huge, probably insurmountable in some end-use applications.

The redesign work will also come at a cost that the brand owners may not be willing to pay for. But polymer producers have no choice but to bear these costs because they are at risk of losing their licenses to produce.

For every tonne of plastic rubbish removed, how many will be added?

There will be some successes in redesigning films and flexible pouches. But in some applications, redesign to make use of only a single polymer will be impossible. These applications will as a result be more exposed to being banned by legislators.

Another problem is that even where redesign to a single polymer is achieved, this will still not protect some end-use applications from being banned, especially in the developing world.

Think of the single-serve pouch, which was hailed as the great economic liberator in very poor countries where many people are too poor to afford, say, a whole bottle of shampoo. The insurmountable logistical challenges of collecting single-serve pouches for recycling, even if they have been redesigned, might still lead to bans being introduced.

There is a trust amongst some polymer producers that logistical challenges will be fixed. I have heard it said that incentive systems will become so strong that the streets of Jakarta and all of its coastline will be cleared of plastic rubbish. But Indonesia has 17,508 islands and 54.7m kilometres of coastline.

Some 2bn people across the world in general, most of whom lived in the developing world, have no access to any rubbish collection and processing systems.They have no choice other than to dump their plastic rubbish directly into the rivers and oceans. This makes the cost and complexity of setting up rubbish collection systems, landfill sites and recycling systems etc. simply enormous.

All the major polymer companies seem to be taking the recycling challenge seriously.

How does the US in particular, given the scale of its capacity additions, balance this equation? How does it prevent a punitive response from legislators and the general public if data emerges about the net growth of plastic rubbish in the environment, even as recycling efforts intensify? The risk that for every tonne of taken out of the natural environment in 2018-2030, many more could be added.

For every tonne of used plastics they will therefore take out of the natural environment in 2018-2030, many more new tonnes could be added as new capacities come online.

A buying opportunity, but only to a limited extent

Polymer buyers will likely be getting excited about the arrival of this new US capacity at a time of lower global economic growth and the erosion of demand because of the sustainability issues. There will be some short term gains to be made.

But the buyers – i.e. the traders, distributors and the plastic converters – will face exactly the same pressure from the brand owners as the polymers producers. The erosion of demand will affect them in very similar ways. I know of one major trader that is already looking to invest in the recycling sector. There are likely to be many more.

The US is unlucky in that it began to bring its new capacity on-stream just as the geopolitical environment turned also against it – meaning the US/China trade war – along with, as I said, the erosion of demand. The Middle East, which drove the last big two waves of new capacity, enjoyed no such bad back.

But the US can reinvent itself, as can the rest of the global polymers business, by being more service-based, by investing ever-greater sums into recycling and into rubbish collection and processing systems in the developing world.

Maybe I am being too pessimistic. Perhaps incentive schemes can be created that clean up the mess from the 10 rivers, of all which are in the developing world, which are responsible for 90% of the plastic rubbish in the world’s oceans.

And perhaps it will be possible to eventually recover the costs of these efforts. The market leaders might be able to brand their recyclable polymers in supermarkets. They could end up being household names for all the right rather than the wrong reasons.

What I am sure of, though, is that polymer companies should think long and hard about building any further virgin LLDPE capacity anywhere in the world.

PREVIOUS POST China's real GDP growth below 6% as mono-ethylene glycols margins provide early indicator of depth of downturn
NEXT POST US ethylene glycols: Diversifying away from China may prove impossible