As always, this blog post expresses my own personal views and these are not the views of ICIS. Thanks 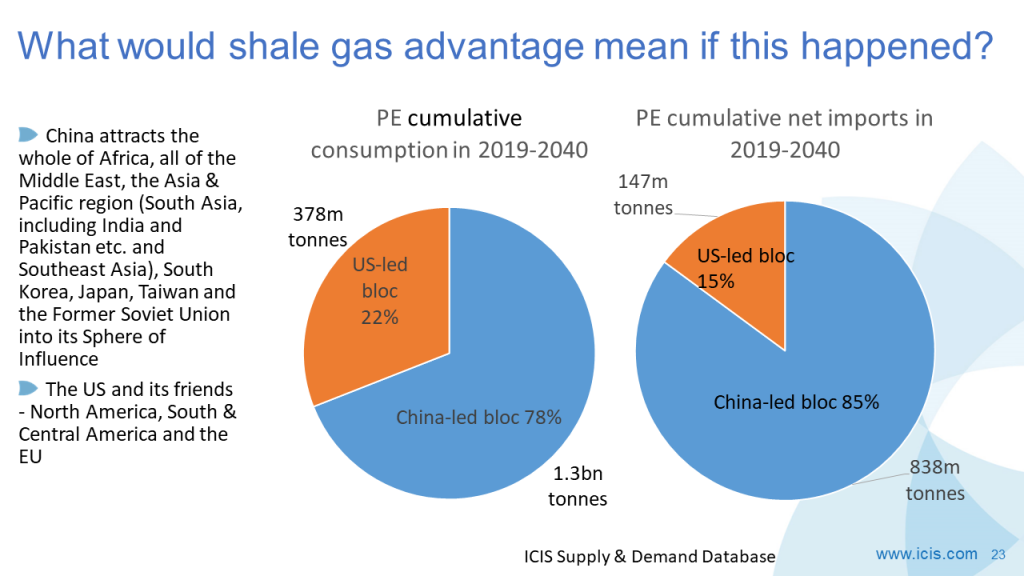 TEN HOURS before I wrote this blog post, the South China Morning Post published an article headlined, “Dim prospects for a deal as China and US resume trade war talks”.

The newspaper said a deal hinged on the resolution of the deep divisions between the two sides, including the core US demand that China end state subsidies of its manufacturing and service industries.

But this morning the Financial Times published an article in which the prospects of a limited deal seem to have to have increased. Any deal, possibly by as early as today, would be followed by further discussions next month at the Asia-Pacific Economic Cooperation leaders’ meeting in Chile.

Confused? No need to be. It has been clear for a long time that a partial deal would suit President Trump if it is early enough before the 2020 election for him to point to evidence of an economic rebound.

A partial deal would involve China buying more US agricultural products, a delay in new tariffs and possibly a roll-back in existing tariffs.

But the president’s dilemma is that if the deal occurs too far in advance of the poll, there is a danger that by the time the voters get to vote the rebound will have faded away.

And fade away it eventually would because unless there is a major re-alignment in US politics, the deep-seated differences between the US and China would drag the global economy down. Remember that both the Republicans and Democrats are broadly aligned on their approach to China.

An example of these differences appeared in the same FT article when the newspaper wrote of US plans to restrict capital flows to China.

No longer does the US regard China as a partner. It instead sees China as an adversary that needs to be contained. The US is worried about losing its place in the world as the No1 economic, technological and geopolitical Superpower and sees no alternative to confronting China.

The US change in approach has come too late. Absent a time a machine there is nothing the US can do to prevent the rise of China.

But as the battle plays out, China and everyone else will suffer. Major economic damage is inevitable, as is a major re-alignment in global trade.

The US has a choice of accommodation rather than confrontation with China. Accommodation is essential if it wants to do business with the China and most of the rest of the developing world.

The reason is that through China’s Belt and Road Initiative and its Asian Infrastructure Investment Bank, China is already well on track to developing a win/win relationship with Southeast Asia, Africa, Central Asia and the Middle East.

China will buy ever-rising quantities oil, gas, petrochemicals and other raw materials from these regions.

Meanwhile, China will transfer more and more of its lower value manufacturing to Southeast Asia and Africa etc. in order to take advantage of cheaper labour as China’s population ages. These transfers will lift hundreds of millions more people out of poverty and unlock much more economic growth.

Equally important will be China’s investment in bridges, railways, power plants, ports and other infrastructure in the developing world at a time when the US is pulling back from overseas investment as it focuses more on its internal issues.

China and its partners will create a self-sustaining and self-sufficient trading zone much bigger in scale than the EU.

Herein lies the problem for the US petrochemicals industry as the two charts at the beginning of this blog post indicate. If the world splits into two halves in the way that I predict:

I cannot therefore see how the US petrochemical industry can continue to invest in new capacity unless the US government reaches a long term accommodation with China.

Without such an accommodation, US feedstock advantage will account for little in terms of export competitiveness, as US exports will face major trade barriers erected around China and its partners.

PREVIOUS POST The new China and the rise of the Millennials transform the petrochemicals business model
NEXT POST Plastics rubbish and the developing world: Lost petrochemicals demand and the new service-led approach