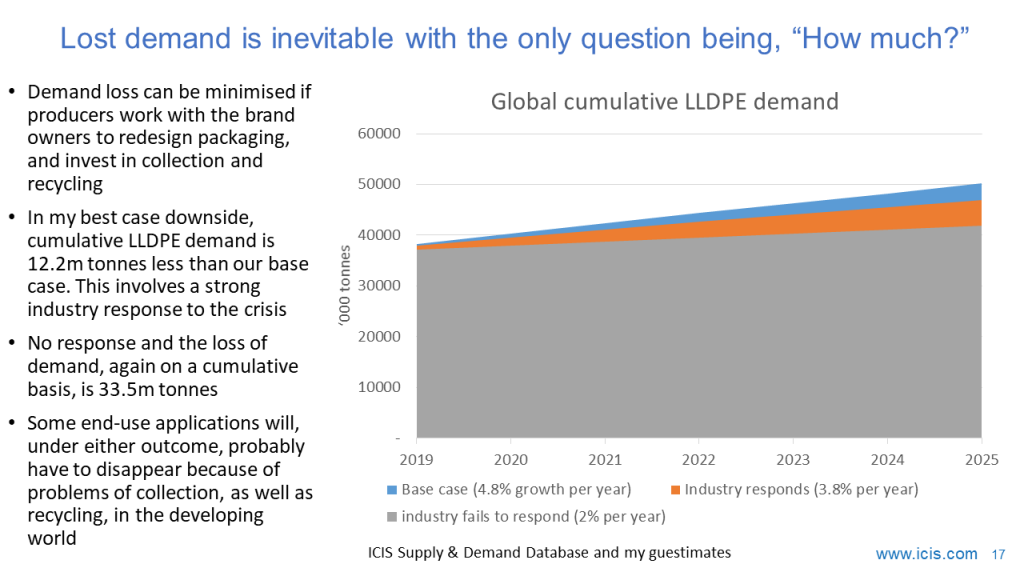 IT WAS billed as a liberating product, something that brought a little luxury to the lives of the very poor. That’s how the single-serve pouch was marketed. But nobody thought enough about the environmental impact of selling single measures of say shampoo in these pouches to people in countries such as India who were too poor to buy a whole bottle of shampoo.

The same applies to numerous other single-use plastic applications. The crisp packet, or potato-chip packet if you’re American, also falls into the same category. Eight layers of foil and different polymers made the packets very attractive design-wise and very light weight, which of course reduces transportation costs.

Single-serve pouches, crisp packets and many other single-use applications for polymers are impossible to mechanically recycle, as separating the different layers of polymers and other materials cannot be done.

The great hope is that this problem will be resolved by chemicals recycling. Some 15 technologies are being developed which aim to produce commercial-scale fuels and naphtha by reducing plastic rubbish back to its constituent levels. An alternative approach, being pioneered by INEOS, involves turning polystyrene (PS) back into styrene feedstock.

But it is estimated that some 2bn people out of the global population of 7.7bn have no access to any rubbish collection system at all. They have no choice but to either burn plastic, with all its attendant environment problems, are more likely dump it into rivers or the oceans in the way they used to dump biodegradable wrapping materials such as banana skins.

This explains the often-quoted statistic that 10 rivers are responsible for 90% of the plastic pollution in the world’s oceans, with all of the rivers flowing through the developing world.

A side effect of extreme poverty

One of the side effects of extreme poverty in the developing world is that there is a vast army of people which makes a living by collecting plastic rubbish. In India alone the “rag pickers” are thought to number between 1.5m and 4m.

This has led to plastic recycling rates of 60-70% in India. “Needs must”, rather than environment pressures, has in India created perhaps the world’s most comprehensive plastics recycling system. This was established long before most of us woke up to the environmental hazards created by plastic waste.

But here’s the thing: Most of the millions of people who live off collecting plastic waste mainly only pick up plastic bottles, usually made from high-density polyethylene (HDPE) and polyethylene terephthalate, because they are easy to identify and by weight give them the best returns.

Also, well-established recycling systems for plastic bottles make it worthwhile to pick up the bottles – i.e. the rubbish collectors usually have someone willing to buy what they collect. Not so with single-serve pouches and crisp packets etc. because as they cannot be recycled.

Perhaps the developing world’s rubbish collectors can be incentivised to pick up single-serve pouches, crisp packets and fragments of plastic film used for food wrapping. But the volume that would have to be collected to make a difference would be huge, as would building an entirely new incentive system for rubbish collectors across the whole of Asia and the rest of the developing world.

If we carry on as we are, volumes of unrecyclable plastic waste can only grow as the world gets richer and hundreds of millions more people are lifted out of extreme poverty.

So, what’s the answer? Stop making some end-use products. The polymers industry needs to take the lead in voluntarily stopping production in order to be seen as part of the solution to this crisis, otherwise applications will be banned anyway by legislators. The laggard producers will also be taxed out competitiveness.

If we stop making some products how do we continue to deliver modern-day products at affordable prices?

Let’s stick with shampoo as an example and the single-serve pouch. Instead of selling single-use portions of shampoo in pouches, used HDPE shampoo bottles could be used repeatedly. Someone could take a shampoo bottle to a store and buy whatever shampoo they can afford from a large dispensing bottle.

For the polymer companies, the inevitable outcome is less-than-expected demand growth. The only question is how much less demand.

Let’s take linear-low-density PE as an example, some 55% of which is used in single-use applications. Our base case sees annual global demand growth averaging 4.8% from now until 2025. But as end-use applications disappear for LLDPE my two downsides see growth at 3.8% per annum in the best case and 3% in the worst case.

The best case would involve a strong industry response to the recycling challenge. Yes, demand would be lost as some applications disappear. But demand can also be protected by redesigning multi-layer packaging so single types of polymers and no aluminium, thereby enabling recycling. In this outcome, global consumption of LLDPE would be 12.2m tonnes less than our base case on a cumulative basis during the whole forecast period.

If the industry doesn’t respond my guesstimate is that annual demand growth falls to 2%. This would mean cumulative consumption at 33.5m tonnes less than our base case. LLDPE would see a major market share loss to other materials such a paper and aluminium.

It is up to the polymers industry. Either it responds in the right way or it doesn’t respond. But in either event, loss of expected demand growth is, as I said, inevitable as we move to a lower growth world – and to a world where polymer producers need to be more service-based. Providing environmental solutions rather than endlessly building new capacity is where the answer lies.