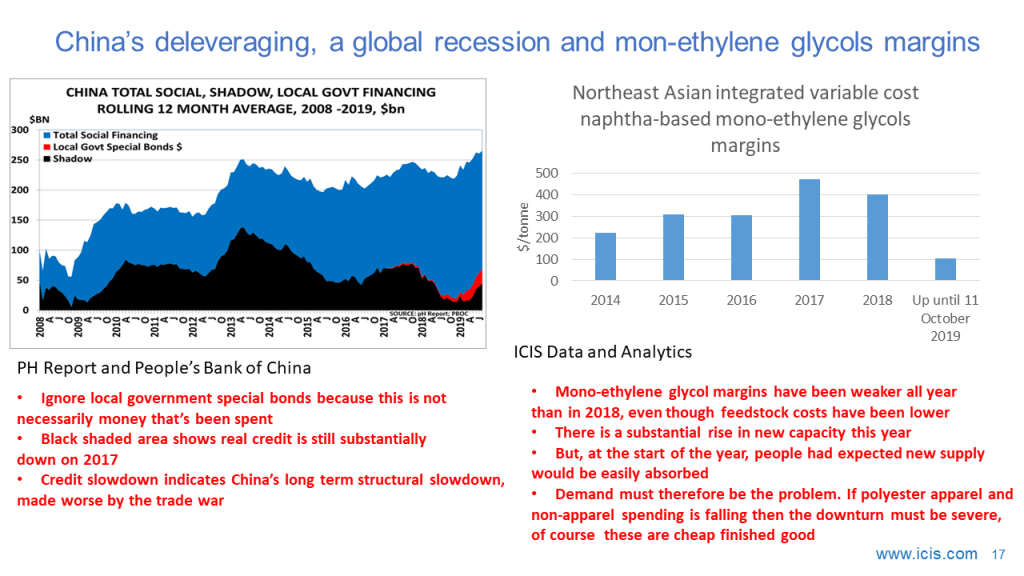 GLOBAL stock markets will now doubt respond negatively to the news that China’s official GDP growth in Q3 fell to a 30-year low of 6%.

But it important to put this event into the proper context. First of all, nobody has ever been able to trust of the official GDP growth numbers. Anyone who uses them as the sole basis for estimating petrochemicals demand growth is likely to end up with numbers very wide of the mark.

It seems likely to me that real Chinese growth is lower than 6%. The above chart on the left helps explain why. China’s credit growth, when you take away the distorting effect of local government special bonds, which has been added to the official data only since last September, remains substantially down compared with 2017.

And even if you include the red shaded area – the special bonds – new credit so far this year is below the peak years of 2014-2015. But we can’t include the special bonds, because, just giving permission for the bonds to be issued doesn’t automatically equal economic stimulus. Many local authorities in China are running out of bridges and roads to build because of over-investment in infrastructure. New financial rules are also make it harder to spend on infrastructure.

Officially, China reports an increase in electricity consumption so far this year. But unofficially, one local electricity producer, Huaneng Power International, says China’s power demand is down. If Huaneng is right, it is hard to see how China’s economy can be really growing at 6%.

Lower credit growth in China is the result of efforts to tackle bad debt and reduce environmental degradation. These efforts will not let up, no matter how much the trade war damages growth.

The great thing about petrochemicals markets is that they provide strong early indicators about the real extent of overall economic growth, given that petrochemicals are the raw materials for a wide range of finished goods.

Take a look at the chart on the right, showing our Northeast Asian integrated naphtha-based variable cost mono-ethylene glycols margins. They have been falling throughout this year.

What’s remarkable about this particular value chain is that clothing and non-apparel – pillowcases and sheets etc. are not “big ticket” items that always suffer during any economic downturn, however mild.  Finished goods at the end of the polyester chain are usually very cheap.

The collapse in global and Chinese auto sales, as autos are of course a “big ticket” item, has to be of some concern. But when discretionary spending on cheap goods also falls we should become really worried about both the slowdown in the Chinese economy, and also the global economy as well. China is the world’s biggest consumer, by far, of finished products made from polyester and all of its raw materials, including mono-ethylene glycols.

There is a significant increase in ethylene glycols global capacity this year (our capacity estimates include di- and tri-ethylene glycols, but the vast bulk is of course mono-ethylene glycols). We forecast capacity will rise by 7% over 2018 to 37.7m tonnes. Some of the new slug of capacity is also very competitive as it is ethane-based and so is exerting pricing pressure on the naphtha-based players.

After many years as a net ethylene glycols importer, the US swung into a small net export position of 178,163 tonnes in January-August of this year. US capacity will this year be slightly below 1m tonnes/year higher than 2018. As China gradually tries to raise its self-sufficiency (China is by far and large the world’s biggest importer), it is due to add more than 2m tonnes/year of capacity in 2019.

But when I spoke to people in the polyester chain at the beginning of this year, nobody expected ethylene glycols to suffer major oversupply in 2019. Whilst the 7% rise in capacity is quite big historically, it’s not that big.

The problem must therefore be demand. We had expected China’s ethylene glycols consumption to rise by 6.6% this year, but, from the conversations I have had more recently, this seems unlikely. Something like 1-1.5 percentage points less than this feels about right. There must also be doubts about whether our global growth forecast of 5% will prove to be accurate.

What has happened in naphtha-based monon-ethylene glycols margins might thus be a strong early indicator of a global recession. As I said, if spending on cheap finished goods, such as polyester clothing and non-clothing, is being affected then we are in significant trouble.

PREVIOUS POST Surge in US polyethylene exports occurs as China growth slows, Asian margins turn negative
NEXT POST The US places heavy bets on LLDPE at a time of demand erosion