Vietnam polyethylene demand boom may not last because of infrastructure pressures 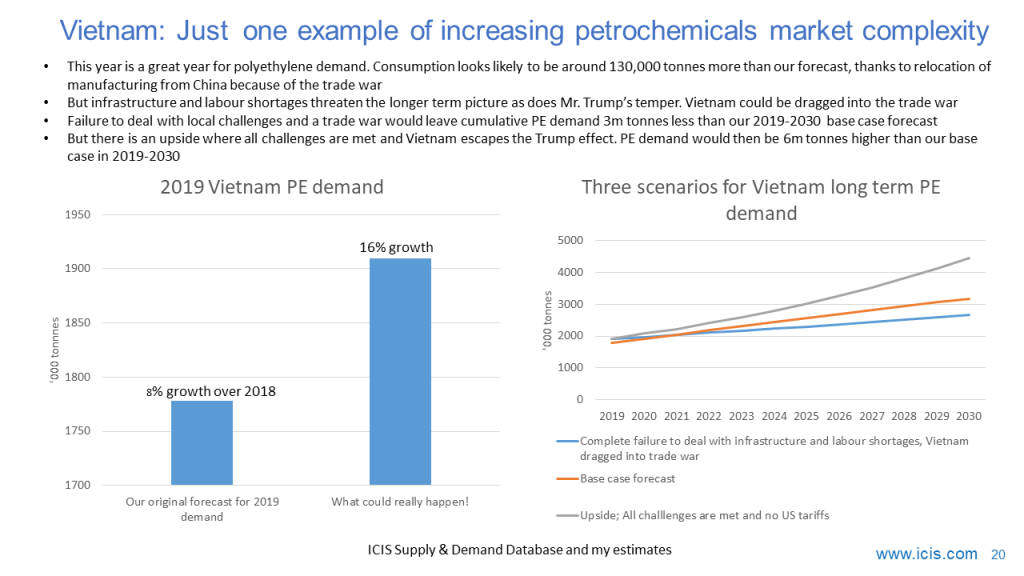 LET’S start with some good news: Vietnamese polyethylene (PE) demand looks set to grow by 16% in 2019 over last year compared with our base-case assumption of 8%. This would deliver 131,000 tonnes of demand more than we have forecast (see the above chart on the left).

Note that the same surely applies to polypropylene and the other synthetic resins, but I’ve yet to survey and analyse the data.

Why these upsides? US tariffs on Chinese exports of plastic products, imposed as part of the trade war, have accelerated the pace at which converters are shifting their operations from China to Vietnam.

Relocation was already taking place long before the trade war began because of China’s ageing population versus Vietnam’s youthful population. The median age in Vietnam is just 30.4 years versus 37 years in China. By 2030, Vietnam is expected to have a median age of 38.5 versus no less than 47 years in China. Far too little attention continues to be paid to the critical role that demographics play in driving the global economy in general.

Anyway, back to my main point. Since the trade war took off in the middle of last year, tariffs of 25% have been levied on Chinese shipments to the US of plastic plates, sheets, films, foils, tubes and pipes etc. The duties were due to be increased to 30% in October, but it is not clear whether all the increase happened.

Chinese businessmen are very smart. This is why they make so much money. In response to the US tariffs, Chinese converters have been shifting to Vietnam in increasing numbers. A year ago, four out of ten Vietnamese plastic converters were reportedly under Chinese ownership. This is apparently now at six out of ten.

Thanks to speedy government approval processes on both sides of the border, it can take as little as four months to set up a new processing facility in Vietnam. Don’t be fooled by the sometimes acrimonious public relationship between the Chinese and Vietnamese. Beneath the surface they get on very well.

I don’t have any official PE import data available as the basis for my forecast of 16% Vietnamese PE demand growth in 2019, only what the traders are reporting as imports. Imports are said to have totalled around 1.55m tonnes in January-September, which, if you annualise for the full year would mean demand growth of no less than 26% (imports, or rather net imports, equal demand in Vietnam because Vietnam will have PE production until 2023. Because of reports of big overstocking, 26% seems too high – hence my prediction of growth of around 16%.

This is providing some relief for a global PE business that’s struggling to absorb a huge surge in new US supply, just as the global economy slows down.

The ports are full and job-hopping is rife

As I discussed on Monday in a broader post on the challenges of relocating manufacturing away from China to any other developing market, Vietnam’s ports are congested because of too many deliveries of raw materials and too many exports of finished goods. This the result of the trade war-related shift of manufacturing up and down many value chains.

Breakneck Vietnamese economic growth over the last few years, which has been further accelerated by the trade war, has left the country needing:

On this latter point, go figure. Vietnam’s population is just 7% of that of China’s. Rapid economic growth was always going to create labour-supply problems.

“I know one factory worker in Vietnam who has moved jobs three times in the last eight months. On each occasion, he’s managed to get a 50% pay rise,” said a PE trader who I spoke with last week.

A further challenge for the Vietnamese economy is the ire of President Trump, as I again discussed on Monday in my broader post about the risks of the White House playing the Whack-a-Mole: Every time any developing country benefits from strong export growth to the US, the US whacks it with tariffs.

President Trump specifically threatened Vietnam with tariffs in June after he said the country’s trade practices made it “the single worst abuser, almost of anybody”. The US has placed Vietnam on its currency and economic policy watch list and has placed 400% import tariffs on Vietnamese steel imports.

Vietnamese PE demand growth might in future fall of a cliff as the overall economy slows down.

The above chart on the right includes two alternative scenarios for Vietnamese PE demand growth. My upside is based on complete success in dealing with the infrastructure and labour challenges and Vietnam avoiding a trade war with the US. The downside assumes the opposite. This leads to the following:

Planning your petrochemicals business has become a great deal more complex, largely thanks to US government policies. None of us are familiar with today’s levels of complexity and uncertainty, no matter how long we’ve been in the business.

What to do then? Keep reading my blog, obviously, read everything else you can else can get our hands on, talk to lots of people and go for long walks, runs or bike rides etc. so you can process all this information.