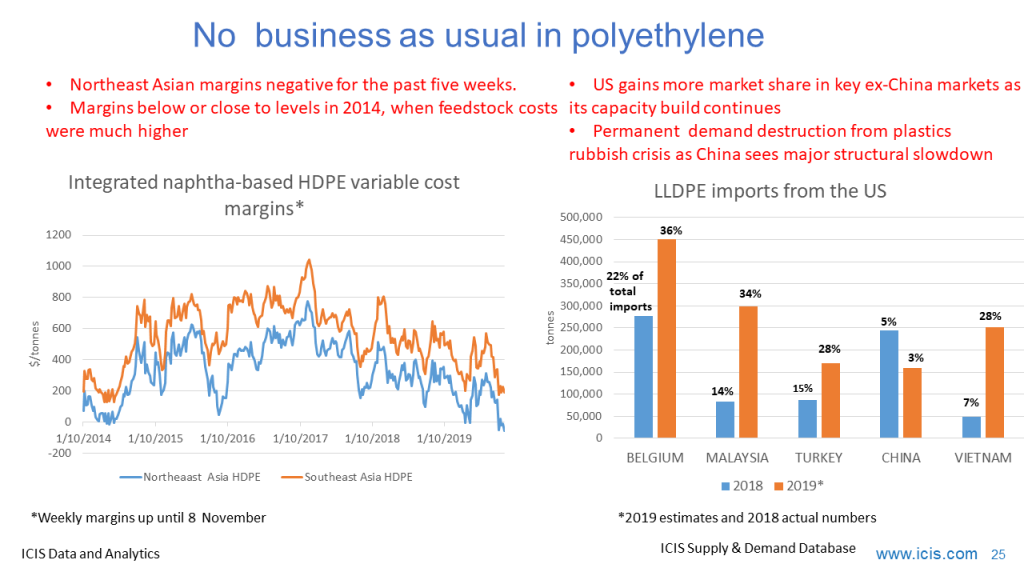 MALCOLM GLADWELL, in his very thought provoking book The Outliers, writes about what we think is gut instinct, but is instead the result of a minimum of 10,000 hours of doing something: Sub-conscious expertise that tells us how to think and react in most situations because we’ve been here before.

So, when the gut instincts of experienced polyethylene (PE) industry professionals are not telling them anything useful, this is a cause for alarm. This tells us we are in the middle of a set of events we haven’t experienced before.

One such occasion was back in late 2008 when markets came to a grinding halt. The default reaction, because few if any people had seen anything like this before, was to say, “Don’t worry, things will very quickly be back to normal”.

This didn’t happen. We lost a lot of demand in the developed world. But fortunately, China’s economic stimulus package came to the rescue. As demand growth turned negative in the US and Europe, in China it grew by an astonishing 28% in 2009 over 2019. Chinese demand growth has been excellent ever since.

Strong growth in China year after year, usually higher than we forecast, is now hardwired into our brains.

As with late 2008, we cannot draw much on our experience to understand today’s PE markets:

Now let’s look at some of the data that supports why we are in uncharted territory.

Asian PE margins the weakest since at least 2014

The chart on the left at the beginning of this post shows our estimates of Northeast Asian (NEA) and Southeast Asian (SEA) integrated naphtha-based high-density PE (HDPE) margins. As you can see, in recent weeks they have fallen to their lowest levels since at least 2014, when we began or margin assessments. It the same  story in linear-low density PE (LLDPE) margins. In NEA, both HDPE and LLDPE margins have been negative for the past five weeks.

Dive into the numbers behind the assessments and you find the dominant cause of the margin declines is a collapse in PE prices. HDPE and LLDPE prices are down by an average of 18% across both regions so far in 2019, even though feedstock costs are 16% lower. In 2018, naphtha cost $619/tonne CFR Japan versus $522/tonne CFR Japan in 2019.

The other key comparison is with 2014 when naphtha costs were at $866/tonne CFR Japan on much more expensive crude. Naphtha-based margins were understandably very squeezed in that year, as always happens during a rapid run-up in oil prices. PE producers always struggle to pass on additional costs to their customers in these situations.

Despite much cheaper raw materials, margins are either weaker than they were 2014 or getting very close to being weaker. HDPE 2019 margins in NEA are 20% lower than they were in 2014. This tells that the problems have to be supply and demand and not feedstock costs – and that supply and demand must be severely off-kilter for profitability to have taken such a big dive.

The China import flood also tells us something important

“Move on, stop writing about this as there nothing unusual here, it’s just seasonal,” I was told by some industry sources when I have kept going on about the rise in Chinese PE imports in 2019.

I therefore did the number crunching. There are no seasonal factors, going back as far as 2000, which explain the sharp rise in China’s rise in net imports in January-September. The details are quite staggering: Net LLDPE imports were up by 21% during the first nine months of this year, with HDPE and low-density both 16% higher.

When you add import numbers to our estimates of local production across the three grades of PE, you get 13% growth in January-September apparent demand. Measure this against our forecast of full-year demand growth of 7.7% and this implies overstocking of 1.1m tonnes. On a long term historic basis, this overstocking is exceptionally high.

This tells us that exporters are flooding the China market because it remains the world’s standout consumption market. Why they are flooding China is because growth elsewhere is weaker than expected. They are also facing greater-than-expected competition in their home markets from US material.

The reason for weaker growth is the trade war, as is the greater-than-anticipated competition from US PE imports. Concern over what Mr Trump might do next is suppressing economic activity. Tariffs are having an effect on growth. The US is being forced to reduce HDPE and LLDPE exports to China and prioritise other destinations. This is the result of the 30% tariffs China has imposed on US cargoes as part of the trade war.

The above chart on the right, where I just focus on LLDPE (it’s exactly the same story in HDPE), tells the story of the extent of increased US competition in ex-China markets.  Here I’ve chosen only a few companies, but other countries show similar patterns.

The standout stories in Asia are Malaysia and Vietnam. Malaysian imports from the US are set to jump from just 84,000 tonnes to 299,000 tonnes, with Vietnam likely to see an increase from 49,000 tonnes to 252,000 tonnes.

How are your 10,000 hours serving you right now? I am guessing not particularly well. They are not certainly not serving me well. In the 22 years I’ve been working in this industry I have never before seen such a big shift in trading patterns.

Next year will see something else that many of haven’t experienced: A sharp decline in Malaysian net PE imports as the big Petronas/Saudi Aramco refinery-petrochemicals project in Malaysia comes fully on-stream.

The RAPID complex is in the process of being started up We expect Malaysia’s net LLDPE imports to fall from 410,000 tonnes this year to 155,000 tonnes in 2020. It will be a similar story in HDPE. Where then will the US place its volumes given that Malaysia has become such an important market for the US?

Vietnam has benefited greatly from the relocation of plastic processing capacity from China to Vietnam, one of many trade-distorting consequences of the trade war. The US has thus been able to greatly increase its exports to Vietnam across all three grades of PE. But infrastructure and labour shortages seem likely to adversely affect Vietnamese PE demand growth in 2020.

Back to China and its structural changes

As I said earlier, our base assumes Chinese PE demand growth of 7.7% in 2019 over last year. This is a rate of growth which would again be the envy of the world. There would be nothing new here. Growth at this level would be well within our experience, as Chinese growth averaged 9.4% per year between 2000 and 2018.

We must get used to lower levels of petrochemicals demand growth in general. Growth only a few percentage points lower would make a big difference because of the size of Chinese demand. In PE, if growth were to be 6.7% this year rather than our forecast of 7.7%, demand would be 330,000 tonnes less than we have anticipated. Knock a further percentage point off our prediction for next year and the market would end up being 680,000 tonnes smaller.

Paradigm changes are always hard to accept because they are outside our experience. We have no gut feel to fall back on in how to react. And even when we intellectually accept that changes have taken place, peer pressure and confusion about what to next can lead to inertia.

We have entered a new paradigm for the reasons I highlighted in the first section of this post. Denial is therefore not the answer.

What happens next will be a PE downcycle of historic depths. Margins will continue to fall. But naphtha crackers will not shut down. We will instead see more trade barriers erected, this time preventing US cargoes from flooding Europe and SEA etc.

Demand will continue to decline because of the plastic rubbish crisis and a slower global economy. The economic slowdown will largely be the result of the structural changes in China.

We will quickly reach the point where many of today’s conventional PE projects will be shelved, and for good as this is a not a normal downcycle. The nature of demand is changing, permanently. Investment will instead switch to mechanical and chemicals recycling.