Shift in supply chains away from China adds costs, complexities and risks for petrochemicals 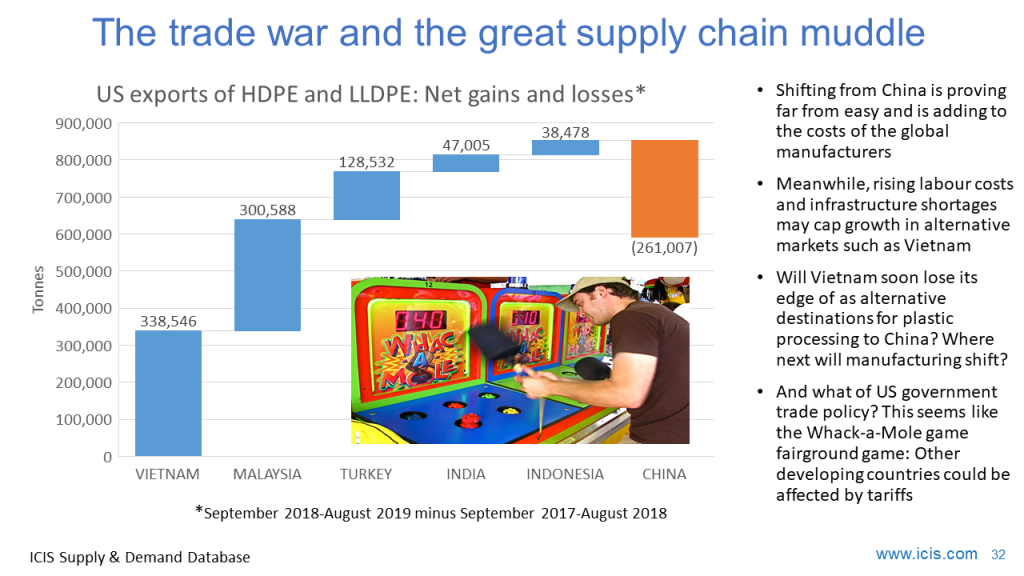 AS PETROCHEMICALS and other manufacturers scramble to relocate their businesses away from China in order to compensate for the trade war, they are discovering that there can be no replacement for China.

China has been building up its global manufacturing dominance since as early as the 1980s. In the process it has moved from being an importer for all the components to say make IPhones – which are then often assembled and re-exported – to the point where most components are made locally.

This is Problem No1: For any manufacturer that moves to a developing country other than China, the cost of importing components not made locally can be high. In some cases, why bother moving at all?

Next comes the ability of Chinese manufacturers to achieve just-in-time delivery. Because of China’s long experience in manufacturing, and its excellent logistics and infrastructure, getting goods to Western markets in time for Thanksgiving and Christmas is not an issue. It is not always the same elsewhere.

This leads us on to Problem No2: Delays to shipments are commonplace outside China. Just-in-time delivery can be defined as 2-3 month delays to agreed delivery times for orders from South Asia and Southeast Asia. When delays like this happen deliveries might as well not happen at all, if they miss major holiday seasons.

Problem No3 is the inability of some less-experienced manufacturers outside China to ensure a high-enough quality of manufacturing. Percentages of defective products can be as high as 40% compared with much, much lower rates in China. Manufacturers cannot risk several container loads of say open-toed sandals arriving with no buckles. They are as a result having to employ local factory inspectors.

The White House: Biggest headache of all

Too-rapid growth in markets outside China – Problem No4 – is best illustrated in Vietnam where the ports are full and there is a shortage of skilled labour and power supply. The World Bank says Vietnam needs to spend an average of $6.7 billion a year to expand its annual power generation capacity by 10% between 2016 and 2030.

There is a risk that you relocate your factory to Vietnam – or build a new petrochemicals or other plant – only to find that labour and logistics shortages lead to demand growth much lower than you had forecast.

The biggest headache of them all – Problem No5 – is the danger that the White House will levy tariffs on developing countries other than just China because of its protectionist stance. Don’t assume everything, or even anything, would change if President Trump were to lose the 2220 Presidential Election. Many Democrats broadly support Trump’s approach to international trade.

Vietnam again serves as the best example here. Its exports to the US climb by 21.5% during the first eight months of this year. In May, the US Treasury Department put Vietnam on its currency and economic policy watch list because of its rising shipments to the States.

Then in June, Trump singled out Vietnam as “almost the single worst abuser of everybody” because of what he claimed were its unfair trade practices. The following month saw the US impose 400% tariffs on steel imports from Vietnam over claims that they originated from Taiwan and South Korea.

Specifically for the polyethylene (PE) industry, the May-July train of events in the US/Vietnam relationship highlights broader risks.

Some six out of ten Vietnamese plastic converters are, I am told, now under Chinese ownership, up from four out of ten only 12 months ago. Chinese converters have relocated to Vietnam, or have acquired local business, in order to avoid US tariffs on Chinese plastic products. The tariffs have been imposed as part of the trade war.

The further irony in all of this is that many of the Chinese-owned plastic converters in Vietnam, as well as the locally owned ones, are being supplied by US PE.

More complex “What, When and Where”

The US is struggling to export high-density PE (HDPE and linear-low density PE (LLDPE) to China because China has imposed 30% import tariffs on US material as part of the trade war.

The latest available trade data highlights the dramatic shift in US PE trading patterns as it struggles to place its biggest-ever increases in production. On a net basis, during the 12 months after China imposed its tariffs on US PE – September 2018 until August 2019 – compared with September 2017-August 2018, prior to the tariffs:

This is the nature of capitalism, the constant search for comparative advantage which includes seeking routes around government policy. But at some point Trump and/or an arm of the US government might notice how the PE and other industries have adapted to tariffs on China and respond by imposing trade penalties on Vietnam.

One can view the behaviour of the US government a little like one of those Whack-A-Mole fairground games. As soon as a mole pops up – representing rising finished goods exports from a developing country outside to the US – the risk is that the White House will hit that country with tariffs.

Another potential mole that’s popped up is Malaysia. US HDPE and LLDPE exports to Malaysia increased by 300,588 tonnes – again on a net basis again and comparing the same two 12-month periods. Malaysia could become a target if it has increased its plastics exports to the States.

For petrochemicals exporters, this creates huge uncertainty in “When”, “Where” and “What” to sell. Let’s deal with these three issues in detail:

We are living in a world where the US pushback against free trade will have a major impact on reshaping investment patterns and trade flows up and down all the manufacturing chains. This is having second, third and fourth-order effects which have I described above.

Equally important, but not discussed here, is my view that we are going through a period not of de-globalisation, as is commonly assumed, but rather re-globalisation. Economic opportunities for the petrochemicals and all other industries will be redrawn by long-running US/China trade, technology and geopolitical wars.

“Which side are we on? Is it the US or China” will be the questions that all companies must answer. For the petrochemicals industry the answer seems obvious: China. This is because China is likely to play a leading economic and geopolitical role in the rest of the developing world, and because China and the rest of the developing world dominate global demand.