Home Blogs Asian Chemical Connections Why President Trump, unlike with Iran, will find it harder to shift course on China

Why President Trump, unlike with Iran, will find it harder to shift course on China

As always, these are my personal views only and do not represent the views of ICIS. Thank you 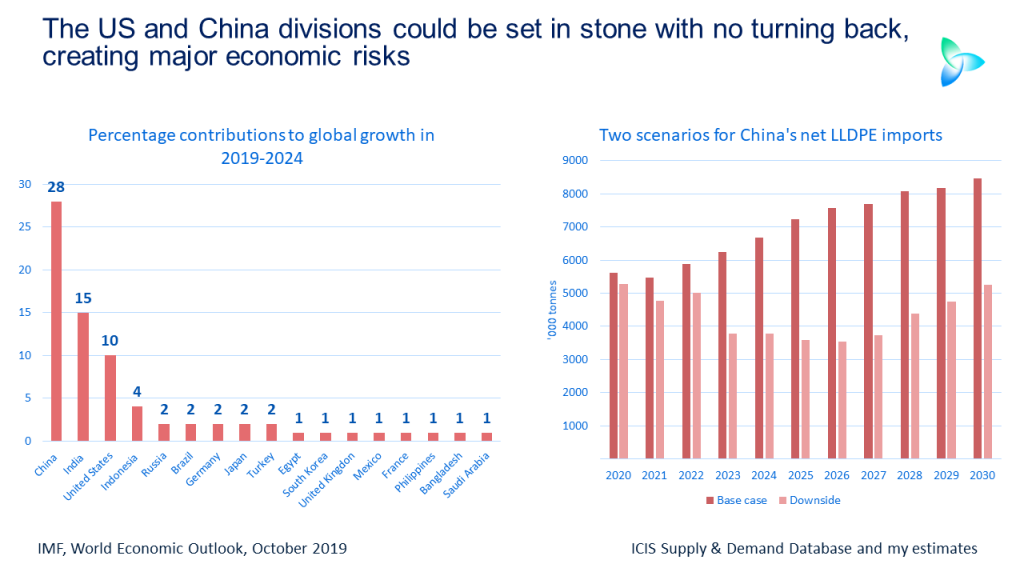 A WILLINGNESS to change policy direction in almost the blink of an eye is one of the messages from this week’s geopolitical chaos. When many of us thought the US was about to go to war with Iran, President Trump changed course.

Perhaps, therefore, the patient and methodical build-up by the US of the legislation it needs to pursue a long-term technology war with China will be wound back.

I think not. The difference between Iran and China is that in the latter case limiting the rise of China has widespread bipartisan and institutional support, leaving the president unable to change direction on the technology war even if he wanted to.

Despite the president’s significant powers, he would be unable to take on a Washington establishment that sees this is as an existential struggle extending into geopolitics and the challenge to the US status as the No1 Superpower. Limit China’s access to high-value technology and you will also limit its military rise, seems to be the argument.

The technology war matters so much more for the future of the global economy than the trade war which, in real and tangible terms, looks likely to have reduced China’s 2019 GDP growth by just 0.6% – possibly even less when you consider the offshoring of Chinese manufacturing that’s side-stepped US tariffs.

What’s at stake in the technology war is China’s ability to escape its middle-income trap. Failure to escape the trap would result in a very deep and long-term global recession, perhaps even a depression, as there is no realistic scenario where any other group of countries or regions could replace China as the main driver of the global economy. This is confirmed by the above chart on the left, from the IMF.

The data on petrochemicals often shows an even greater dependency on China. In the case of linear-low-density polyethylene (LLDPE), for example, the ICIS Supply & Demand Database indicates that 45% of 2009-2019 global growth came from China in 2009-2019. The Asia & Pacific region was in distant second place at 20% with every other region in the low single digits. In 2010, China overtook North America to become the world’s biggest consumer by volume.

Business will simply have to suffer

The far greater risk is that we will once again fail to dodge a real shooting war between a rising Superpower and an incumbent Superpower. Think of Great Britain, Germany, and the First World War as the most recent example of the direction that history normally takes.

Those who disagree with me will be sure to point out that the potential economic damage to both the US and China will force both sides to pull back. The Economist calibrates the damage very well in this article, where it writes that:

Chinese tech firms rely on foreign suppliers for over 55% of their high-end inputs into robotics, 65% of those into cloud computing and 90% of those into semiconductors. It would take 10-15 years for China to become self-sufficient in computer chips and for America to shift suppliers.

Were the Superpower rivalry to spin out of control, it would take a combined 6% of US and Chinese GDP, or $2 trillion, to build duplicate technology hardware supply-chains, adds The Economist.

But at times like this, when geopolitical status is at stake, the view of both the US and China might be this: Business will simply have to suffer.

My concern is that this is also morphing into an ideological struggle, a battle between two competing economic and political systems, just as we saw during the Cold War, giving both sides even less of a motive to step down.

The long-term implications for petrochemicals

As I have long argued, we are heading towards a bipolar world of two competing economic and geopolitical blocs – one led by the US and the other by China. The scenarios I presented in earlier post suggested that China would become almost entirely self-sufficient in petrochemicals through increased capacities in China and in its partner countries, leaving the US out in the cold.

I thought it would be timely to revisit this theme as part of my reflections on what I believe are the differences between the “blink of an eye” shift in US policy towards Iran and the more deep-set and wider-spread approach to China.

Study above chart on the right, which takes our base-case scenario for the LLDPE market in China compared with an alternative outcome:

The big sigh of relief we all took this week about a hopefully a permanent pull-back from a war between the US and Iran should not mean we lose site of the big picture. The broader shifts in global politics threaten all “business as usual” scenarios for the future of the petrochemicals business and leave no room for complacency.

Sadly, though, complacency and internal company politics remain the enemies of sensible planning, as it is so much easier to go along with the crowd in the immediate interests of a quiet and easy life. But life will hardly be easy and quiet in the event of the outcomes I’ve just described.

PREVIOUS POST US and Iran conflict in a world of declining growth and fragile supply chains
NEXT POST The polymers industry, climate change and a call to action