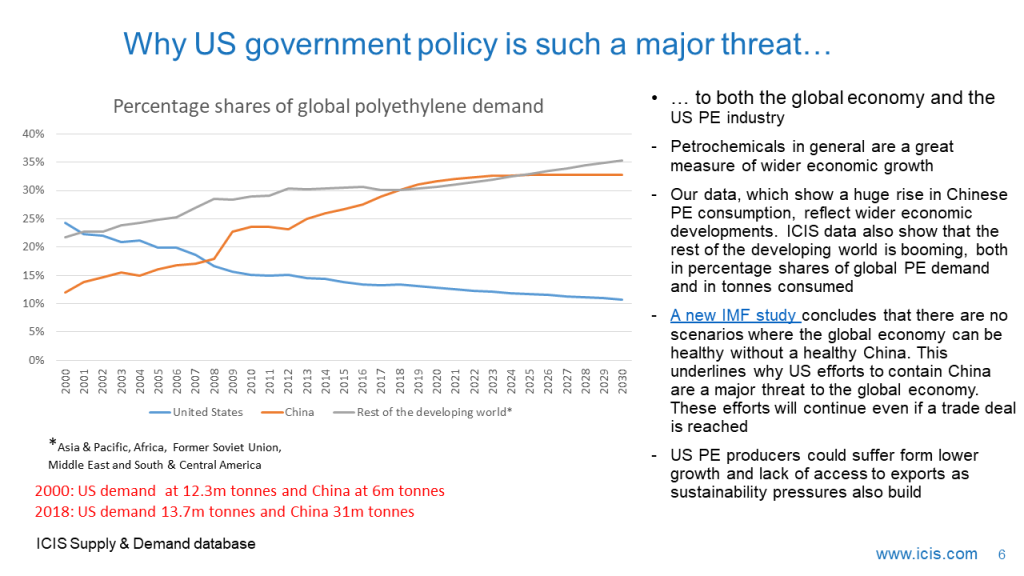 DON’T SAY I didn’t tell you. An important new IMF study confirms what I’ve been arguing for a long time: China has overtaken the US to become the biggest locomotive of global economic growth.

What happens next largely depends on the US, which, like all economic superpowers, has gone past the point of its peak influence. As the IMF study also says – again underlining one of my longstanding arguments –the future of global growth rests in the developing world

If the US were to successfully halt the economic and geopolitical rise of China, which is its objective, there are no set of circumstances in which I see the world as a whole benefiting.

Growth would have to be lower, potentially a great deal lower, because the US cannot reassume the mantle of being the biggest driver of global economic growth. It is a very mature economy and its population is rapidly ageing.

The challenge for China is that it too has an ageing population. But its opportunity is that it is still a developing economy. If China can escape its middle income trap it can continue to deliver healthy growth to the rest of the global economy. Not though if, as I said, the US is successful in its objective.

A challenge for the rest of the developing world is that it is hugely dependent on China for growth. China is the biggest source of foreign direct investment in Southeast Asia, South Asia and Africa, and is the biggest market for oil, gas and petrochemicals and other raw material imports from the Middle East, Africa and Latin America etc.

A weaker China would wipe out any chance whatsoever of a healthy global economy because of the knock-on effect on the rest of the developing world. This is again something I’ve been arguing for a long time.  But don’t just listen to me, also listen to the IMF, as it says in the same study:

Both Republicans and many leading Democrats support the current approach to China. There is a very good chance that whoever wins the next presidential election, today’s aggressive and confrontational policy towards China will stay in place.

Over the next few weeks I am pretty convinced that there will be a big sigh of relief, though. President Trump needs strong US stock markets and the best way to deliver this is to reach a pause in the US/China trade war. This will enable him to draw attention away from the impeachment enquiries and improve his chances of winning next year’s election.

But any trade deal would leave major disagreements between the US and China unresolved such as the rise in China’s military strength, China’s state subsidies for manufacturing, cyber security and intellectual property rights protection.

Once all the euphoria has died down over a trade deal, these major issues will come to the surface again – at best leading to a weaker global economy and at worse a war between the US and China.

What this means for petrochemicals

It always makes sense to focus on polyethylene (PE) in these circumstances as the best example for our industry, because it is at the very heart of the steam cracker business.

Now let’s add the rest of the developing world. Most of the countries in Asia & Pacific (which includes the Indian subcontinent and Southeast Asia), Africa, the Middle East, the Former Soviet Union and South and Central America fall into the category of developing. Collectively, they were worth 21% of global PE demand in 2000, rising to 30% last year. By 2030, they will have reached 35%.

No country is an economic island, particularly in petrochemicals, the success of which across of all its products has been built on globalisation.

The big rise in US PE capacities has been justified by cheap feedstock and the easy ability to export most of its new volumes, as the US market has become much smaller in the global context.

If the US continues to shrink from engagement with the rest of the world and gets into more trade disputes with countries and regions other than just China, then how is it going to sell all of its extra volumes?

China would likely respond by pushing much more aggressively towards completion of its Belt & Road programme. This sees the establishment of a trading zone far bigger than the EU. The zone could become pretty much self-sufficient in PE and other petrochemicals, thus excluding US imports.

As I’ve already said, if the US is successful in containing the rise of China, global economic growth will weaken, making it even harder for the US to sell its PE.

Another issue is sustainability. Our base case view of PE demand from now until 2030 needs to be challenged. We can build downside scenarios which provides this challenge based on lost demand resulting from the plastics rubbish crisis.

Especially vulnerable is linear-low density PE because of its heavy uses in flexible packaging and film applications that are very hard to recycle. This is where most of the new US investments have taken place.

Yet another problem is that whatever PE demand remains will be increasingly served by recycled material, both chemically and mechanically recycled. This will put more pressure on not just US producers but all producers using virgin hydrocarbon feedstock.

US politics can change, of course. A different approach to China would remove the threats to the global economy and to US PE producers’ ability to access China and other developing markets. What will not go away, though, are the sustainability pressures.

This is where we need to return to the IMF study and its view that the developing world will drive the global economy. In my view, this can only happen if growth is sustainable because of horrendous, pretty much existential environment problems – for example, this week’s smog crisis in New Delhi. We cannot go on like this. The future has to be green.

PREVIOUS POST India must forget trying to follow China and should instead launch a Green New Deal
NEXT POST Shift in supply chains away from China adds costs, complexities and risks for petrochemicals