The polymers industry, climate change and a call to action 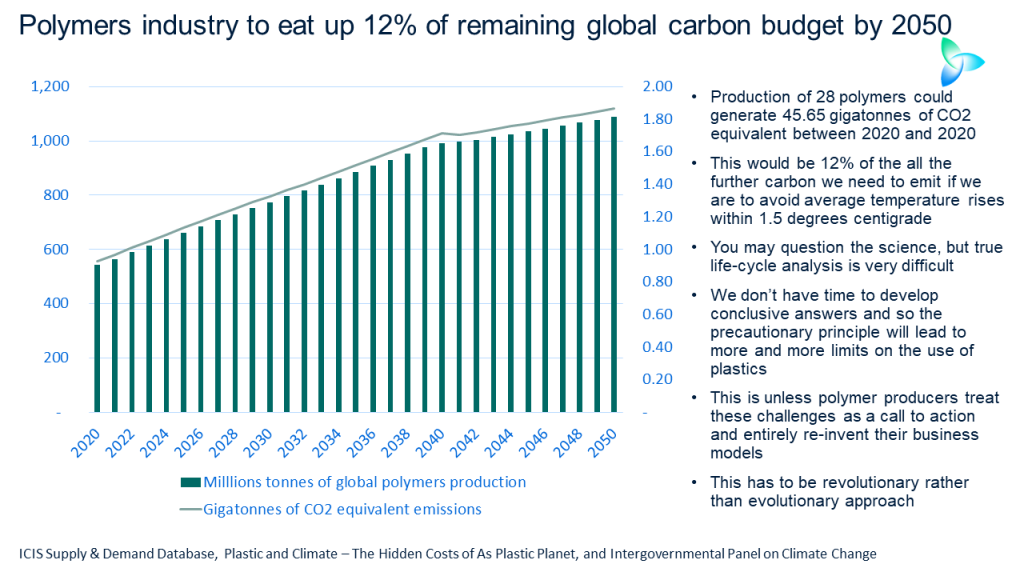 MUCH OF the debate about plastics and the environment is, I fear, missing the bigger picture.

The focus is heavily on what some of those in the industry say is the debatable science behind studies into the harmful effects of plastics. Polymer executives argue that questionable science doesn’t take account the carbon cost of replacing plastics with other materials such as paper and cotton.

For example, I’ve often read that paper takes up more volume in landfill than plastics, doesn’t last as long as plastic and has an overall carbon footprint greater than plastic.

The first problem with this kind of thinking is that we don’t have rigorous-enough science to make full life-cycle judgements on the impact of plastics versus other materials because of the relative paucity of peer-reviewed studies.

Where we do have mountains of peer-reviewed science is into human impact on climate change, with that science brought together, reviewed and summarised by the UN’s Intergovernmental Panel on Climate Change (IPCC).

This is hardly surprising given that we have known about climate change since the 19th century, with concern first raised in the 1930s about our influence on the climate.

In contrast, plastics have only been an integral part of our everyday lives since the 1970s, and until just a few years ago nobody thought that plastic pollution was an issue worth worrying about.

Public opinion has been swayed by the scientific consensus and the evidence before our very own eyes – the increased frequency of extreme events such as the wildfires in Australia, my home country.

Most legislators are of the same view, with a few notable exceptions. The argument has essentially been concluded in favour of those who believe we are causing climate change. No matter what our personal views, we need to accept this reality.

The polymers industry will as a result be constantly judged on its contribution to climate change, with, as I said, the core problem being how you truly judge the life cycle of a plastic pellet.

We don’t have time to develop rigorous-enough models that fully assess the net impact of plastics on greenhouse gas emissions. Some estimates are that we have only a decade left to limit global temperature rises to within an average of 1.5 degrees centigrade, above which the impact on our planet will be nothing short of devastating.

Even if this is too pessimistic and we are talking about 20 years, this will still to be too little time to get the science on plastics right when you consider it took many years to develop the models used by climate scientists.

Science, good or otherwise, will be accepted because of this precautionary principle: We can’t take anymore risks with our environment and so let’s assume the worst-case impact from plastics and limit the use of plastics.

“But surely, plastics have a great role to play in improving crop yields, and thus reducing the need for fertilisers, while they also cut methane emissions by reducing the amount of food that goes rotten before it can be consumed,” I can hear you saying.

Absolutely. But this is where another major problem comes in – the very visible scar that plastic waste has left on our environment.

“How can I trust what the industry is saying when it negligently allowed plastic rubbish to flood our rivers and oceans,” seems likely to be a common public response.

This is grossly unfair and unreasonable you might well argue. But again, get used to it, I am afraid. This the world in which we now live.

This relates to a third problem we face, which is the link between the polymer industry and the oil and gas industries – as of course the vast majority of polymers are made from oil and gas.

Oil and gas companies are publicly pretty much vilified for their role in climate change with the reputational damage extending downstream into polymers.

“I don’t trust the oil, gas [and by association] polymers industries because for years they denied there was problem, with some companies even sponsoring anti-climate change science,” is the public attitude.

Plastics to consume 12% of the remaining carbon budget

A May 2019 study – Plastic and Climate: The Hidden Cost of the Plastic Planet – made an attempt at polymer life-cycle analysis, when it estimated its carbon footprint from the well-head all the way to the nascent science on how plastics are reducing the oceans’ ability to act as carbon sinks.

The study assumed that each tonne of plastic production generated 1.85 tons of CO2 equivalent.

Based on their estimates of global plastics production from 2019 until 2050, the authors calculated that the polymers business would consume up 10-13% of our remaining carbon budget.

This is built on the IPCC’s assessment of how much more carbon we can afford to emit by 2050 if we are to have any chance of limiting global temperature rises to within 1.5 degrees centigrade.

I took our estimates for production of all the major polymers between 2020 and 2050 from our ICIS Supply & Demand Database, in an effort to replicate this work. This included all the major commodity and speciality polymers – 28 polymers in total.

The end-result was remarkably similar to the study’s finding. In total, between 2020 and 2050, I calculated that the global polymers business would generate 46.65 giga tonnes of CO2 equivalent, 12% of the world’s remaining carbon budget of 381 tonnes.

I am going to make no comment on the strengths or weaknesses of this methodology or on the study as a whole, as I am not a scientist. But I do believe that the study is an important addition to the debate.

I can imagine the kind of issues that polymer executive might raise regarding the study, including the need to also include the positive effects of plastics on net carbon emissions.

Equally, though, one could counter this with all the frippery and wastefulness of our modern way of life that’s facilitated by plastics. Think of plastic pouches and disposable coffee cups.

Any thorough lifestyle analysis would, in my view, also need to consider the role that plastics have played in contributing to our broader carbon-intensive lifestyles.

Consider, for example, plastic packaging as a whole and how it allows us to stock-up on food in big volumes as the food lasts a long time.

This allows us to buy in bulk in supermarkets, thus giving us the time to live a long distance from where we work – a long-running trend that started in the US in the 1950s and has gathered pace around the world.

Shouldn’t plastics therefore take a share of the pollution from the autos needed to drive to and from work?

And as far durable applications, what about the role that plastics have played in raising the affordability and desirability of auto ownership?

But, a I said, we don’t have enough time left to entirely evaluate the true life-cycle impact of plastics.

A call to action for the polymers industry

I am not suggesting we all sell our houses and live in yurts. But the full extent of our modern way of life is in my view unsustainable and we will all as individuals have to make choices.

For example, if you live in the northern hemisphere, do you really need or just want Kiwi fruit flown-in from New Zealand.?

The answer is obviously just a “want”. If New Zealand Kiwi fruit became unavailable, thus saving on the carbon generated by packaging and long-distance transportation, I am sure the average rich-world dinner party would survive without serious damage.

A lot more difficult and less frivolous choices will have to be made by the public and by legislators in order to reduce our carbon footprints.

The polymer industry can lead the way by working with the brand owners to create more “local-for-local” food supply chains. Packaging must also be redesigned to reduce its content of virgin polymers.

The response must be revolutionary rather than evolutionary in how we design packaging and the applications into which we market and sell products.

The same applies in breaking the link with virgin hydrocarbons feedstock for both reputational and net carbon footprint reasons. We must go much further down the paths of mechanical and chemicals recycling to the point where they need to become the main sources of new production.

The alternative is severe economic damage from a growing public and legislative backlash against plastics in general, and not just disposable plastics, as the full extent of the unsustainability of our modern lifestyles becomes more evident.

This is a huge opportunity for the brilliant innovators in our industry who have the opportunity to be part of the solution rather than a cause of the problem.

PREVIOUS POST Why President Trump, unlike with Iran, will find it harder to shift course on China
NEXT POST Higher Asian ethylene and polyethylene prices do not mean we are past the bottom of the downcycle