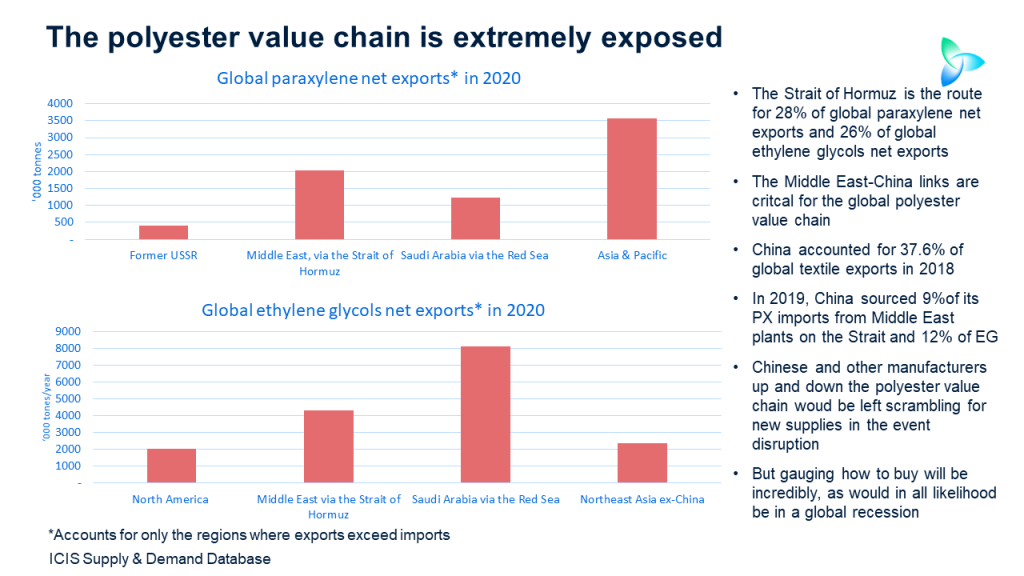 THINK of the Fukushima disaster in 2011 and multiply its impact on global supply chains by at least a factor of ten. Then place the supply disruptions from the US and Iran conflict into the context of an already weakening global economy and you can begin to grasp the risks ahead.

The conflict escalated this morning with the news that Iran had launched two rounds of ballistic missile attacks against US military bases in Iraq. A full-scale war now seems even more likely than it did on Monday. Neither side of course wants a war, but miscalculation and escalation are the overriding messages of military history.

At stake is the some 30% of global oil supply that flows through the Strait of Hormuz, which could so easily be blocked by Iran.

Even the fear of supply disruption, which will be amplified greatly by today’s missile attacks, will push crude higher at a time when the global economy can ill afford the extra expense, as we are already very likely in a global manufacturing recession.

The influence of the trade war on the manufacturing recession is overblown. If enough people saying something enough times, then we tend to believe it. Hence, the phrase “The economic downturn caused by the trade war” is widely accepted as true even though supporting data appear to be thin on the ground.

Consider that on a direct basis, Chinese GDP looks set have been down by just 0.6% in 2019 as a result of the declining value of exports to the US. Even this modest number will not paint the whole picture. The damage on a net basis is likely to much less because of Chinese manufacturers shifting production to other countries, especially Vietnam, in order to avoid US tariffs.

Think about the effects on traditional industries of the rise in sustainability – for example, the German autos industry as electric-vehicle sales increase in Europe. And in polyethylene (PE), the damage to demand from the plastics rubbish crisis is only just beginning.

The biggest factor of all in the global manufacturing slowdown are the structural changes taking place in China’s economy. Demographic and debt pressures continue to be largely overlooked as nearly everyone focuses on the trade war. There is no turning back as it is simply impossible for China to repeat the global economic rescue act of 2009-2017.

The stellar growth levels of those years which occurred in major petrochemical end-use markets  in China such autos will not and simply cannot be repeated. A further problem is that global manufacturing capacity has been added on the basis or those growth rates would continue – for instance, in PE and polypropylene (PP). Funding new manufacturing investments was far too easy because of the record-low global interest rates since the Global Financial Crisis.

I as discussed on Monday, rising oil prices could represent a long-awaited Minsky moment:

When might financial markets end their bull run? We await a “Minsky Moment” that must happen at some point given that total global debt (public plus private) reached S$188 trillion at the end of 2018, up by US$3 trillion when compared with 2017. In 2008, immediately ahead of the Global Financial Crisis, global debt totalled $173 trillion, during an era when both China and the West were supported by much more favourable demographics.

A war between the US and Iran, or even tit-for-tat attacks on each other’s assets that fall short of all-out war, could end up being the next Minsky Moment. We are in the Ponzi phase of Minsky’s Financial Instability Hypothesis, as, in many cases, loans have been issued on the basis that borrowers can only initially afford to pay the interest. Principal repayments can only be met if assets continue to rise in value. If assets instead collapse in value, then neither interest nor principal payments can be met.

So far, we have only had to contend with a manufacturing downturn. But when the Minsky Moment arrives, the downturn will extent to financial markets. And as financial markets decline, so will consumer spending.

China accounted for $119bn of global textile exports in 2018, 37.6% of the global total and there are no reasons to believe that 2019 will have been that much different.

The drift of textiles manufacturing from China will have continued last year, because of the long-term challenge of rising costs. The trade war added some degree of acceleration. But China has strong logistics and other supply chain advantages that will keep it in pole position as the world’s biggest textile exporter for some years to come.

Let’s next think of the polyester raw materials that make textiles. Polyester accounts for around 70% of global textiles demand.

The excellent ICIS Supply & Demand Database – even more critical a subscription at a time like this – is very helpful in measuring the scale of the risks.

In 2020, we forecast tha 28% of global net paraxylene (PX) exports will be shipped from the Middle East via the Strait of Hormuz – 2m tonnes. This discounts Saudi production on the west Red-Sea coast. This 28% is out of all the regions in the world that are in net export positions – i.e. their exports exceed their imports.

China will account for a quite staggering 93% of the world’s net PX imports 2020. The net import share is amongst all the regions in the world where imports exceed exports.

In 2019, around 9% of Chinese PX imports came from Middle East plants that exported via the Strait of Hormuz. This might not seem that much, but it would still enough to force Chinese purified terephthalic acid (PTA) producers  to scramble for additional supplies if the Strait were blocked. The PTA producers would also find it very difficult to calibrate how much supply they really needed in an environment of declining demand.

PTA producers that got it wrong – not just in China, of course, but everywhere – would be left with surplus inventory as demand collapsed or would lose orders to competitors if they bought too little.The same would apply at each stage further downstream in the value chain, all the way to the clothing retailers. Judging raw material purchase will take up a lot of time when companies will have a myriad of other problems to contend with.

The Middle East-China vulnerability in another major polyester raw material – mono-ethylene glycol (MEG) – is much greater. Middle East ethylene glycols net exports via the Strait of Hormuz will be 4.3m tonnes in 2020 – 26% of the global total. Note that we include di -and tri-ethylene glycols in our assessments, but the vast bulk of global production is in MEG.

China’s MEG imports via the Strait of Hormuz were 12% of their total imports in 2019.

An era of extreme political and economic uncertainty

The status quo didn’t feel right for so many people in the Western world. As the outstanding book, National Populism: The Revolt Against Liberal Democracy, makes clear, the pushback against the status quo from the “left behinds” is not about economics, but is instead about culture. There has clearly been a major failure of governance by established politicians.

We have ended up with a different type of politician through the rise of the Populists, including of course President Trump. Trump, like his supporters, rejects the status quo. His anti-establishment approach has included rejecting the 2015 nuclear deal with Iran and agreeing to the killing of Qasem Soleimani.

Political disruption taking place against a background of exceptional economic risk. We have never seen, as mentioned above, global debt at today’s level. This poses a major systemic risk. Other systemics risks include China’s long-term structural slowdown and the US and China dispute over technologies and geopolitics which go far deeper the minor issue of trade. Meanwhile, the old way of doing things, the old hydrocarbons-based global economy, is unravelling as sustainability pressures change markets such as automobiles and plastics.

Here is another free advert: Come to us for your scenario planning. We can connect the dots by combining excellent petrochemicals data and analytics with our strong track record in predicting and analysing the big economic and political risks.

PREVIOUS POST Iran and the US: Assessing the risks for petrochemicals and the global economy
NEXT POST Why President Trump, unlike with Iran, will find it harder to shift course on China