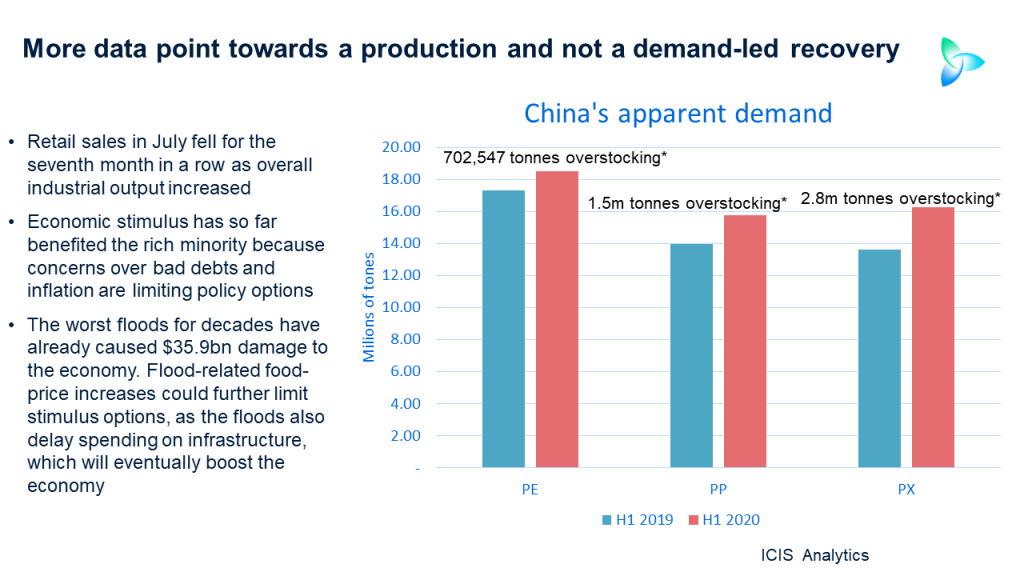 AS I’VE been flagging up for the last six weeks, China’s economic recovery has been driven by higher petrochemicals production and imports, along with an overall pick-up in manufacturing, rather than a big improvement in end-use demand. This was further underlined last week when official data showed that overall industrial production had increased by 4.8% in July as retail sales fell by 1.1%. This was the seventh month in a row that retail sales had fallen.

An important mechanism used by the Chinese government to get its manufacturing back online very quickly, once it had brought the pandemic under control, was, in my opinion, stockpiling crude when prices were cheap. Crude imports surged during the first seven months of this year with much of the oil ending up in storage.

The cheap oil has in my view supported a post-pandemic rebound in petrochemicals production through advantaged-priced feedstock supplied from local refineries. These advantaged feedstocks then bolstered the economics of manufacturing further downstream.

The sharp rise in petrochemicals net imports across a range of products in January-June reflected confidence among importers that China’s economy was bouncing back based on the rise in local production, but, as I said, not a recovery in end-use demand. Importers were also attempting to hedge against rising oil prices. There were strong increases in imports of other commodities.

What’s alarming about the failure of retail sales to rebound in line with industrial production is the risk that China’s post-pandemic stimulus may not have worked – and may not work in the future because of financial constraints.

The Financial Times (FT) reports that because economic stimulus has been mainly focused on investments and construction, there has been an unbalanced two-speed recovery with the country’s wealthier citizens emerging relatively unscathed from the crisis compared with lower-income earners. It supports this argument with the following important data:

The FT digs further into the data and finds that the headline yuan (CNY) 6.1tr China stimulus programme is, in reality, less than this as a lot of the funds are being used to bail out heavily indebted local governments and state-owned companies.

And as I’ve been warning about for years, because of the big debts built up during the 2009 stimulus programme, China has limited wiggle room to move much beyond its current stimulus programme. Another government concern is that cash handouts to the public would stoke inflation, resulting in social unrest.

There is a chance that China will fix the problem over the long term through its “domestic circulation” strategy, the cornerstone of its 14th Five-Year Plan (2021-2025). This involves tax and pension reforms (pensions remain insufficient for  lower-wage workers) and reforms of land-ownership rules. It could well be a step too far for land ownership to become entirely private because of the communist system, but relaxing the rules could unlock a lot more for the personal-wealth group (I will discuss what this could mean for China’s petrochemicals demand in a later post).

In the short term, though, China’s policy options seem very limited for boosting consumption by average and  lower-wage workers. Unless this can happen, there is little chance of a big recovery in retail sales during the rest of 2020 as the typical Chinese consumer doesn’t buy Louis Vuitton.  China’s 2019 median disposable income was just $3,831 compared with $45,284 in the US.

We must also consider the impact on consumption that this year’s floods may have. The floods remain a quite shockingly under-reported event, when you consider all the media attention that is being focused on Hurricane Laura in the US Gulf. If the Three Gorges Dam were to fail, the humanitarian and economic impact on China would be far greater than hurricanes Katrina and Harvey put together.

The great news, though, as of yesterday, was that floodwaters were receding. Nevertheless, 45.2m people are reported to have been affected by the floods in 27 provinces along the Yangtze River, Huai River, Yellow River and in southern China, since the start of June.

The economic damage from the floods is so far estimated at $35.9bn. China’s food-price inflation edged up in July, which was partly the result of flood damage to agriculture. As mentioned earlier, inflation is one of the reasons why the Chinese government is said to be reluctant to use direct cash handouts to consumers as a way of boosting consumption.

What this could mean for petrochemicals

In polyethylene (PE), as the above chart illustrates, China’s H1 apparent demand (local production plus net imports) rose by an average of 7% across the three grades. This compares with our estimate of 3% real demand growth for the full year. This could therefore mean that excess stocks amounted to 702,547 tonnes in H1.

H1 apparent demand for polypropylene (PP) increased by 13% as net imports rose by 29% with local production 10% higher. Our estimate for real demand growth for the full year is 2%. This implies H1 overstocking of 1.5m tonnes.

Apparent demand for paraxylene (PX) increased by 19% during H1. Net imports were down by 18%, but local production was no less than 70% higher. Our estimate for full-year real demand growth is a negative 1%. This points to H1 overstocking of 2.8m tonnes.

We don’t provide monthly estimates of China’s ethylene glycols (EG) production. However, there were no reports of major disruptions in local production in H1 as net imports increased by 12%. Our estimate for full-year real demand growth is negative 4%. There are reports of high EG inventory levels because of the sharp rise in imports and weak downstream demand.

This data is of course now somewhat historic as we are in late August. It might be that local petrochemicals production has been disrupted by the floods since June, with imports also lower because of excess petrochemicals inventories and weak end-user demand. We should have a clearer idea in a few days’ time when China releases its July import and export numbers.

But what the macroeconomic evidence and the H1 petrochemicals data clearly tell us is that talk of a strong Chinese economic recovery has been overstated. Equally important to note is that the chances of a strong recovery occurring during the rest of this year seem slim. Please be careful out there.