Home Blogs Asian Chemical Connections China’s PE imports in 2021 could be as high as 19.8m tonnes or as low as 16.8m tonnes 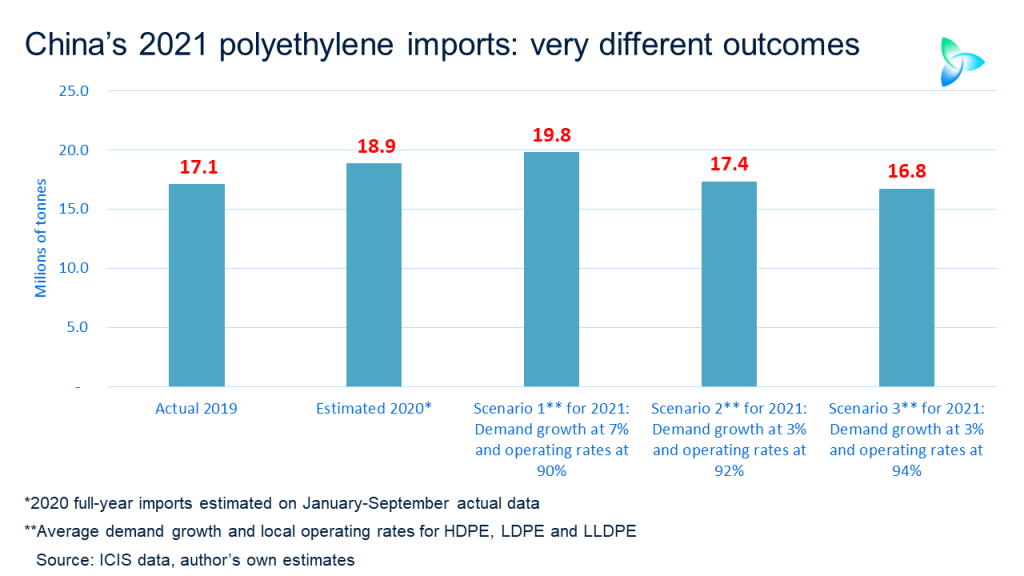 IN SCENARIO 3 in the above chart, China would import 16.8m tonnes of polyethylene (PE) in 2021. This would be down by 13% from the estimated total imports for this year – 18.9m tonnes – based on annualising the actual January-September import data. The January-October data should be available later this week.

Another way of looking at this worst-case 2021 outcome is a comparison with the actual imports for 2019. On this basis, the decline would be only 2%. But Scenario 1, the best-case outcome for overseas producers, would be radically different. Scenario 1 sees next year’s imports at no less than 19.8m tonnes, a new all-time record high. This would be 5% higher than the estimate for 2020 and 16% above 2019.

In other words, to put it more simply, the difference is huge between the best -and worst-case outcomes for overseas producers – either 2021 PE imports of 19.8m tonnes or 16.8m tonnes. This variation would have a major impact in the global supply and demand balance.

This once again underlines that, as China pushes harder towards self-sufficiency, operating rate decisions by local producers are having a much greater impact on imports. The three scenarios also show the big impact that variations in demand growth would have on import volumes.

Chinese PE demand growth in 2020 has been way better than just about everyone had imagined was possible back in March. We can put this down to four factors:

It is safe to assume that China’s economic recovery will continue into next year and that internet sales growth will remain stronger. There might be, though, a decline in PE demand as people eat more in restaurants. But even though China appears to have the pandemic well under control, the precautionary principle points to continued strong demand in hygiene end-use markets. Growth in Chinese exports of manufactured goods might, nevertheless slow down.

HDPE imports to remain strong, despite surge in local capacity

China’s HDPE demand, based on the January-September data for apparent demand (our estimate of net imports plus the China Customs department net import data), is in line to grow by 14% during the full-year 2020 versus 2019.

This would result in the following: Scenario 1 imports at 9.9m tonnes, Scenario 2 at 8.5m tonnes and Scenario 3 at 8.2m tonnes. Any of these results would be remarkably strong when you consider this: Local capacity  will increase by 21% next year over 2020 to 11.7m tonnes/year, according to the ICIS Supply & Demand Database.

Asian LDPE price premiums over LLDPE have been at a seven-year high in 2020 for two reasons.

Firstly, most of the new global PE capacity additions have been in LLDPE. This means there is more LLDPE around relative to LDPE. LLDPE and LDPE are substitutable for one another in many of their end-use applications.

LDPE supply has been reduced by strong margins for ethylene vinyl acetate (EVA), which has added to the cost of LDPE. EVA margins have been healthy on strong end-use demand in the solar-cell market. Global demand for shoes has recovered as lockdowns have eased. EVA is  used to make midsoles for shoes. Some LDPE plants can swing between either LDPE or EVA production.

This explains why our January-September data show a 3% year-on-year decline in China’s apparent LDPE demand.

Under Scenario 1, I forecast that this 3% decline will continue throughout next year, with operating rates at 88% – the same as estimated operating rates during January-September 2020. This would leave 2021 imports at 3m tonnes.

Scenario 2 assumes demand growth will again be at minus 3% ( don’t seem being any worse than this, with operating rates at 90%. Imports would slip to 2.9m tonnes. Scenario 3 again assumes minus 3%  growth with capacity utilisation at 92%, leaving imports at 2.7m tonnes.

China is pushing very hard towards greater HDPE and LLDPE self-sufficiency, which, in the longer term, represents a substantial threat to imports. This is not as much the case in LDPE, where very modest capacity additions are being planned. Next year, for example, we see local LDPE capacity rising by just 4% over 2020 to 3.3m tonnes/year.

Scenario 1 for LLDPE assumes demand growth next year a10% which is again the same as our estimate of apparent demand growth in January-September 2020. Operating rates are at 90%, resulting in imports of 6.9m tonnes

Scenario 2 lowers demand growth to 5% and raises operating rates to 92%. Imports are at 5.9m tonnes. Under Scenario 3, demand expands by 5% as operating rates reach 94%, resulting in imports of 5.8m tonnes.

Conclusion: breaking this down to trading partners

What we next need to do is assess how these three scenarios would affect 2021 imports by China from its major trading partners.

This will be the subject of my post on Friday as I consider the impact of my 2021 scenarios of 12 of China’s biggest PE trading partners. In short here, these 12 partners should be fine next year and are entitled to ask “PE downcycle? What downcycle?”

But many overseas PE producers also produce PP where the outlook for China’s 2021 imports is nowhere near as rosy.  And beyond 2021, there is, as I said, every chance of a sharp decline in PE imports as the Chinese self-sufficiency drive accelerates.

PREVIOUS POST China may next year import 66% less PP from South Korea than in 2020, 72% less styrene from Saudi Arabia
NEXT POST China polyethylene and ethlyene glycols in 2021: country-by-country outlook for exporters