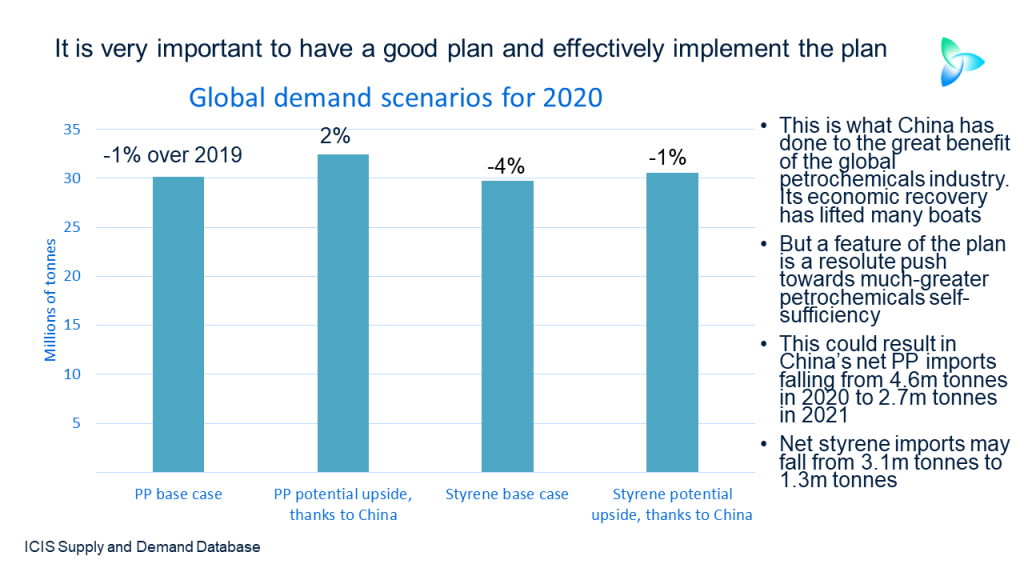 IT IS always useful to develop a good plan and then effectively implement the plan. China appears to have been successful in both these respects in 2020 and this has been of great benefit to the global petrochemicals business. If only this were the case with all other countries.

Without the plan, global growth in mono-ethylene glycols (MEG) and paraxylene (PX) demand would have been negative this year instead of what looks likely to be positive growth, as I discussed in my blog post earlier this month. And, as you can see from the above chart, the story might be similar in polypropylene (PP) and styrene monomer (SM). This reflects the dominant role that China plays in global demand across all petrochemicals.

Chinese PP demand might end up growing by 12% this year compared with our base-case forecast of 4%. This would be 2.2m tonnes more Chinese demand than our base case. The upside would also result in global PP demand rising by 2% compared with our global base case for a 1% decline. The upside case for Chinese demand is built on our data for apparent demand in January-September – local production plus net imports – that has been annualised.

Our base case for China SM growth in 2020 is 4%. The apparent demand for January-September 2020 indicates a 12% increase. If this were again repeated during the full year, Chinese SM demand would be some 830,000 tonnes more than we have forecast. This would result in a 1% decline in global demand growth versus our base case for a 4% decline.

Let me stress again that, as always, these are just preliminary snapshots of markets and do not represent our final numbers. Our dedicated and hardworking team of analysts will reconcile the final numbers for 2020 next year, which is why you need our ICIS Supply & Demand Database.

It is fair to say, however, that this year will have been a lot better for Chinese petrochemicals demand than just about anybody had expected back in March, once the final numbers have been produced.

But there are risks ahead. China’s plan was heavily weighted towards boosting China’s global share in exports of manufactured goods and exports might decline over the next few months because of increased lockdowns in the West. Eventually, also, demand for Chinese washing machines, laptops and office furniture will peak as these are only occasional purchases.

China’s domestic recovery lags behind the rebound in exports, but year-on-year October retail sales increased by 4.3%, marking the third consecutive month of increases. I believe there is sufficient positive momentum to sustain this domestic recovery well into 2021.

Another risk is China’s heavy state planning and the overseas view that this gives China unfair and unreasonable advantages. Even under a Biden administration there is a risk of more US and China trade tariffs in 2021. But I see the resumption of the trade war as a tail risk during next year.

The president-elect will, I think, be too busy building a bilateral approach to China through improving relationships with overseas partners, which, I think it is fair to say without being political, have suffered during the Trump administration. In the words, he won’t have time to get stuck into the weeds of new unilateral tariffs over the next 12 months.

So, on balance, you should expect another good year for Chinese petrochemicals demand in 2021.

BUT – and this really is a huge BUT – I believe that imports will be substantially lower, even in the event of another very strong year for Chinese demand. I see no conceivable scenarios under which China will not want to push much harder towards petrochemicals self-sufficiency.

Petrochemicals are a means by which China is adding value to its economy as it tries to escape its middle-income trap. Supply security in a very uncertain geopolitical world  is also driving maximisation of operating rates. This, of course, matters hugely to the global industry because China is by far the world’s biggest importer of polyethylene, PP, SM, MEG and PX.

Before I consider the prospects for next year in detail, let us review China’s highly effective political-economic plan.

The only economy to see positive 2020 GDP growth

China very effectively dealt with the pandemic once local officials told Beijing what was going on. Because power has been much more centralised since Xi Jinping came to power in 2012, the nationwide response to the pandemic appears to have been better than during the Severe Acute Respiratory Syndrome (SARS) outbreak in 2003. China also learnt a lot from the SARS outbreak and had much better internet tools at its disposal.

Beijing then gave permission for local refineries to front-load their purchases of crude for the year to take advantage of the collapse in crude prices in April and May. This led to record levels of imports. Even though October year-on-year oil imports were sharply lower, Reuters reports that in January-October crude imports were still 10.6% higher.

I believe it is likely that the benefits of competitive petrochemicals feedstock were then passed onto downstream finished goods exporters, with exporters further supported by increased export tax rebates.

China was thus in a perfect position to gain from the recovery in global export markets as lockdowns eased in the West and new spending patterns emerged, such as people converting their homes into offices.

And, wow, look at how China has benefitted. In October, year-on-year exports of garments and clothing accessories increased 6.8% to $13.2bn, according to Trade Data Monitor. Exports of home appliances increased 39.6% to $6.2bn and shipments of plastic products leapt 34.6% to $8bn. Exports of auto parts increased 18.8% to $5.5bn.

China still has very strong labour cost advantages in many major export markets despite its rapidly ageing population, and also boasts very efficient logistics and world-class technologies. This means it would have done well in global export markets in 2020 even without the government’s post-pandemic plan. But the plan added a very thick layer of icing on the proverbial cake.

This explains why the IMF forecasts that China will be the only economy in the world to show positive GDP growth during the full-year 2020. China’s economy will expand by 1.9%, says the IMF.

The risks for 2021 are more supply- than demand-driven

As mentioned above, I don’t see major risks for Chinese petrochemicals demand in 2021. Exports might slow a little, but the domestic economy will continue to rebound. It also important to add that China’s post-pandemic plan included a stimulus programme for the local economy.

Data from holiday sales, tourism and restaurants “all seem to be supporting this recovery in the consumer sector, which I think by mid-next year should be a much bigger driver of the post-pandemic growth recovery in China,” she added.

Petrochemicals demand growth could, however, moderate compared with this year because of slowing exports. But even if percentage growth, say, halved from this year’s very elevated levels, markets by volume have become much bigger. Growth falling to 6% from 12% would thus still add a lot more tonnes to demand.

It is the supply side of the equation that is of more concern. Here is just one scenario each for what could happen in PP and SM next year:

Let me once again stress that these are just preliminary numbers and do not represent the official ICIS numbers.

On Monday, I will go further by providing you with a range of scenarios for Chinese PP and SM imports during next year. I will also forecast the impact on the major Asian and Middle East exporters to China and discuss what they need to do next as the Chinese self-sufficiency drive continues.

In conclusion, this year has been a fantastic year for Chinese demand, way better than just about everybody had expected during the dark days of Q1, when the pandemic first began. But I am afraid this has only kicked the can down the road. The 10,000lb gorilla that sat rather quietly in the corner of the room during 2020 is China’s aggressive push towards petrochemicals self-sufficiency. He is about to wake up.

PREVIOUS POST Why history, culture and politics will give you the petrochemicals answers you need
NEXT POST China may next year import 66% less PP from South Korea than in 2020, 72% less styrene from Saudi Arabia

By John Richardson ALBERT EINSTEIN knew a thing or two about data, including sea...

By John Richardson All the numbers that follow are my estimates only and are not...

By John Richardson I MADE THE argument last Thursday that until or unless the world is fully ...

By John Richardson IF YOU WANT to understand when container-freight chaos will fully come to an end,...

By John Richardson IT FEELS LIKE several lifetimes ago. If you recall, way back in November-December...