Global polyethylene markets: What’s happened in 2020 and an outlook for next year 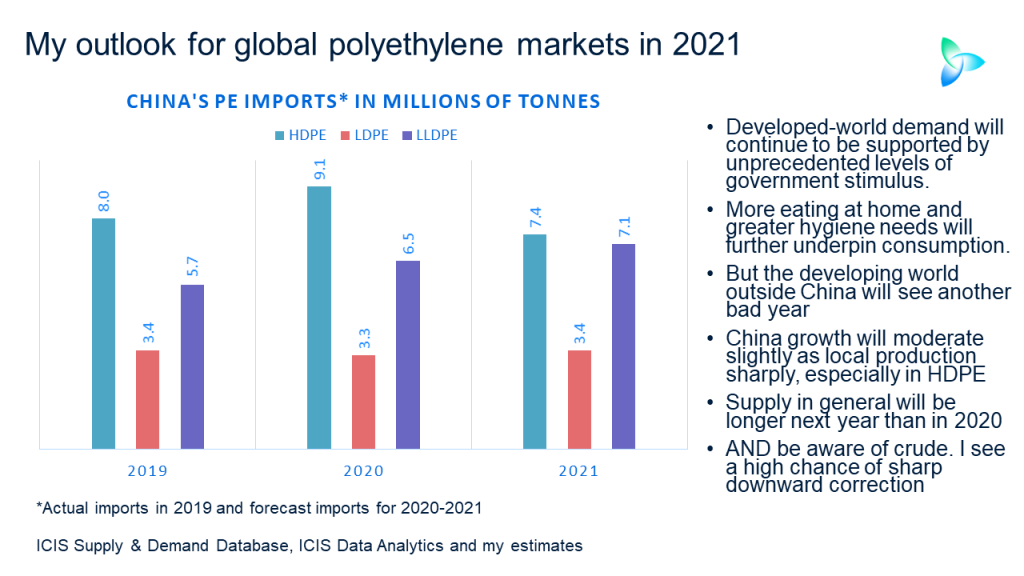 HERE is your essential cut-out-and-keep summary of what has happened in global polyethylene (PE) markets in 2020 and your guide to what I believe will happen next year.

The first two sections will review demand in the developed world and China and the rest of the developing world. These sections will also give you important indications of what you need to plan for in 2021.

The next section will examine how supply in 2020 has been much tighter than just about anyone had expected.

I will also discuss how why I believe that next year will be different. China will push harder towards self-sufficiency, more associated gas feedstock will become available in the Middle East and the delayed Petronas/Saudi Aramco plant will come on stream in Malaysia. There will be no major supply shocks emerging from the US.

It has been a year that few, if any, polyethylene (PE) producers had expected back in March. In those early days of the pandemic, I couldn’t find one producer or trader who didn’t believe that demand would crater in developed markets in the way that it did in 2008.

The logic for this thinking seemed very sound. It has long been obvious that the pandemic is a far more severe economic event than the Global Financial Crisis.

During the 2008 crisis, PE demand quite literally cratered. In the US, for instance, average 2008 year-on-year decline in PE demand across the three grades was an astonishing 14%. Declines of at least this magnitude, probably worse, were widely anticipated.

There are three reasons, which I first identified in April, why the PE business has performed so much better in 2020 than had been expected.

Firstly, government stimulus schemes in the West have heavily targeted low-paid workers. This contrasts with the Global Financial Crisis when the priority was to rescue the big banks, the more indebted the luckier.

In 2008, there was little help for the apocryphal US truck driver on $50,000 who saw his $500,000 home repossessed.  This led to the truck driver cutting back on his spending in the supermarket, at the expense of even the cheapest of the cheapest chocolate chip cookies.

Demand for fast food didn’t suffer, however, as the economic realities were then as they are today: it remains a lot cheaper to feed a family in a burger joint than buying fresh, nutritious food.

This time around, the scale of economic support for low-paid workers has been on a scale we haven’t seen since the Great Depression and Roosevelt’s New Deal. As the excellent Economist Intelligence Unit wrote in its Q4 Global Forecast:

So far this year, G20 countries have announced stimulus programmes worth around US$11tr (or nearly the size of the Japanese, German and French economies combined). These fiscal measures have helped many companies to stay afloat, kept workers employed, and stabilised financial markets.

I am no longer with those who think that a great reckoning with the world’s bad debts is imminent. With inflation set to remain historically extremely low, along with interest rates, more mountains of government spending seem very feasible.

In 2021, PE producers should expect government stimulus in the West to continue to support low-paid workers. But further delays to new stimulus programmes, such as the one caused by the US Presidential Election, might temporarily hurt demand.

There are also many uncertainties about the effectiveness of future stimulus programmes as they morph from “finger-in the-dam” emergency rescues to addressing long-term changes in employment markets. The changes relate not just to the pandemic, but also to ageing populations and decarbonisation of economies.

But, as we are in my view such a long distance from getting on top of this virus, more finger-in-the-dam rescue packages will occur. These schemes must again be monitored for their effectiveness.

Take Australia, where our central bank, the Reserve Bank of Australia (RBA), is busy trying to manufacture a mini house-price boom through quantitative easing and strong signalling that interest rates will remain very low for the next three years.

If the RBA is successful, this will be placing money in the collective pocket of a country that’s heavily reliant on real estate as a source of wealth; if the central bank fails, the long prophesied collapse in Australian home values may finally happen.

Remember: Set up a dedicated team to monitor the impact of government stimulus on consumer spending patterns.

The second big shift in PE markets in the developed world involves more eating at home and less dining out.

As I said, there was no dip in spending in fast-food restaurants during the Global Financial Crisis. But dining out in general has declined this year because of the lockdowns. With further lockdowns highly likely in 2021, we should expect this trend to persist.

The third new dynamic governing PE markets is increased hygiene needs. This is sadly something else that won’t go away in 2021. Think of all the extra demand for household cleaner bottlers made from high-density PE (HDPE) and disinfectant wipes wrapped in linear-low density PE (LLDPE).

The big known unknown is the relative importance of these three new shapers of PE demand world. The degree to which each of these drivers drive markets won’t be static in 2021. Fluctuations in their importance will be constant.

How do you navigate this new complexity? Firstly, as I said, set up a team to monitor government policies.  Also, get much closer to the final end-use customers, supermarket shoppers, through setting up separate teams that monitor consumer behaviour.

Big data will help. But mountains of extra data will have almost zero value, perhaps even negative value if the extra data adds to the confusion, unless you have people capable of interpreting the data.

China and the rest of the developing world

China is nominally a developing market. But in real terms, it is a market on its own, a region by itself.

Another “Wow” is in order, adding to my Wow over the Chinese January-August data. In January-August, China’s apparent demand for PE (our estimates of local production plus the China Customs department’s net import data) increased by 8% year on year. But in January-September, the increase was 10%.

If this trend were to continue for the rest of 2020, full-year demand would be 1.2m tonnes more than our base-case forecast.

Chinese demand, as with demand in the developed world, has benefited from more eating at home and greater hygiene needs.

But what about 2021? If China stays on top of the virus, demand for eating in restaurants may return to pre-pandemic levels. Perhaps we will also see less demand for hygiene products.

Chinese PE demand has also benefited from the July, August and September rebound in exports of manufactured goods which were up year on year by 7%, 9% and 10% respectively.

But here is the thing – and no data point, when you look at the data properly, contradicts this – Chinese local demand is still weaker than it was before the pandemic. Retail sales, for instance, remain behind where they were in 2019.

The local economy will, however, very likely continue to recover in 2021.

But I believe that Chinese PE demand growth will moderate next year. This will be the result of the “less is more” emphasis of the government, made clear during last week’s critical Fifth Plenum meeting (look out for my review of the plenum in Friday’s post).

Over the next 15 years, the focus will be on the quality over the quantity of economic growth as China attempts to deal with its environmental crisis and close the yawning income gap between the coastal and inland provinces.

In Africa, Asia & Pacific (which includes the Indian subcontinent and southeast Asia), our base case expects PE demand to decline by 1% in 2020. Our base case then expects a recovery in 2021 to growth of 6%.

I see as highly likely a further decline in PE demand in 2021 in the above regions. Say PE demand were to again fall by 1%. This would reduce year-on-year growth by 1.7m tonnes. The expansion in global demand would be 25% smaller than our base case.

As we came into this crisis, global PE supply was tight. This was the result of cutbacks in production in response to low margins in late 2019 and early 2020. In southeast and northeast Asia, integrated naphtha margins were negative in November and December last year.

Tighter-than-expected supply was exacerbated by the delay to the start-up of the Pengerang Refining and Petrochemical complex in Malaysia, the joint venture between Petronas and Saudi Aramco.

Hurricane Laura, which struck the US in September, temporarily reduced the country’s PE output by some 15%.

But 2021 is set to turn out very differently. Margins will, I believe, remain healthy for naphtha-based producers on resilient demand and cheaper feedstock costs on weaker oil prices This will mean no major operating rate cuts.

There will be plenty of associated gas in the Middle East in 2021 as OPEC+ realises there is little point in trying to prop up crude prices given the long-term fundamentals of the oil market. A market share battle for crude will take place.

My latest forecast for 2021 US PE exports is a total of some 11.2m tonnes, around the same level as my forecast for this year. This would obviously mean no additional US supply pressure.

Not so in the case of Malaysia. The new Petronas/Aramco complex – Pengerang Refining and Petrochemicals – is due to begin trial runs in late Q4. The complex’s cracker is due onstream in the first quarter of next year.

But the biggest red flag on supply needs to be waved at China.

I believe China will push operating rates higher than historical averages as it seeks to guard against supply disruptions resulting from geopolitical upheavals.

It also makes sense for China to run its new state-of-the-art refinery-to-PE complexes very hard in order to add value to its economy. This would dovetail with efforts to escape a deep middle-income trap.

The end result is detailed in the above chart. HDPE would be badly affected with 2021 imports falling by 1.7m tonnes compared with my estimate for this year’s imports. This reflects local capacity growth of no less than 21% in 2021 over last year, and, as I said, an average operating rate higher than our base case.

But because of much lower capacity additions, LDPE and LLDPE imports would continue to grow by 149,000 tonnes and 582,000 tonnes respectively. LDPE capacity is expected to rise by 2.9% and LLDPE by 8%.

Perhaps the biggest issue of all, which I have only briefly alluded to, is the potential for a sharp retreat in oil prices. In the long term I see this as inevitable. So, please be beware.

In summary on PE markets, don’t delude yourselves into thinking that the new complexity around demand is going to disappear. GDP will, in my view, never work again as even a half-decent measure of growth. You must devote far more resources to studying demand.

Developed-world demand will remain fine in 2021, I think. Governments cannot afford to balk on stimulus and the cost of stimulus will not be an issue. But we need to be aware of variables around the effectiveness of stimulus. Increased eating at home and hygiene needs will continue to support PE demand in the rich countries.

China should be fine in 2021, even though PE growth will moderate a little. Any economic and geopolitical downsides, which the Fifth Plenum sought to address, will take longer than the next 12 months to play out.

The rest of the developing world is different, however. I can see few positive outcomes for next year.

On the supply side, it seems unlikely that supply will be a snug as it has been in 2020 because of higher Middle East, Malaysian and Chinese output (especially Chinese output in HDPE).

Please be careful out there. For further discussion on PE markets next year, contact me at john.richardson@icis.com.

PREVIOUS POST Why China's polyethylene imports could be either 22m tonnes or 3m tonnes in 2030
NEXT POST Politics and petrochemicals: Fifth Plenum review and the US elections