All the numbers that follow are my estimates only and are not the official ICIS numbers. But I hope what follows helps you with your planning process for 2021. Our ICIS Supply & Demand Database is a key tool for your planning process, as all the scenarios below would have been impossible to build without this important resource. 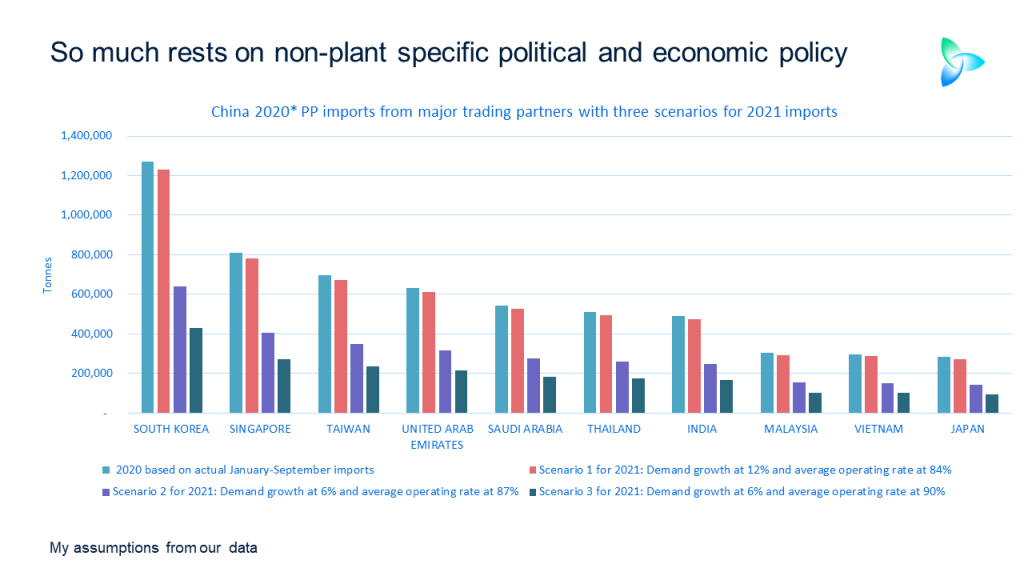 SOMETIMES a picture, or on this case two pictures, are worth more than a thousand words. The pictures or charts in this blog post outline the opportunities and risks for global polypropylene (PP) and styrene monomer (SM) producers in 2021. I will repeat the same exercise in polyethylene , mono-ethylene glycol and paraxylene in later posts.

I am still going to give you around 1,900 words, though, as the details of this story are important for your businesses. Starting with the above chart on PP, China’s 2020 PP imports, if you annualise actual January-September data, could total 6.5m tonnes. This would compare with last year’s 5.2m tonnes.

Even if this turns out to be an overestimate for 2020, there is no doubt that this year has been a fantastic year for the global PP business, much better than just about anyone expected back in March, thanks to China.

But next year, China’s PP capacity is scheduled to increase by 14% to 36m tonnes/year, according to the ICIS Supply & Demand Database. This is part of China’s push across all petrochemicals to greater self-sufficiency as it tries to escape from its middle-income trap and achieved greater supply security in a very uncertain geopolitical world.

We know from the longer-term history of China’s petrochemicals industry that – as the title of the above chart reminds us – political and economic policy has driven how much capacity has been built and how hard plants have been run. These factors have largely overshadowed plant-specific economics.

“I was told, way back in the 1980s, that the market decided the price of energy in China. But I felt this was wrong based on my reading of local politics. So, I went away and studied the subject and found that, definitively, this was the wrong conclusion,” said an energy analyst. I believe this also applies to petrochemicals. Why would it be any different?

Beijing also has a dominant influence over the strength of economic growth, as discussed in my post last Friday. Here I illustrate this long-standing fact through the success of the government’s 2020 recovery plan.

So far so good, local consumption growth up until October continued to edge towards pre-pandemic levels, largely thanks to government stimulus. And I believe that domestic growth will continue to recover in 2021.

But further success is largely outside China’s control. We don’t know to what extent the pandemic will damage demand for China’s exports next year. Neither do we know whether we will see a decline in overseas purchases of Chinese laptops and furniture as people finish converting their homes into offices.

This explains my two scenarios for PP demand growth in 2021, detailed in the above chart. The first outcome of growth at 12%, would be a repeat of my preliminary estimate for this year. A decline to 6% would obviously reflect a slowdown in recovery. But, hey, 6%% growth in the global context would still be excellent.

However, the problem for exporters more relates to China’s operating rate decisions, which as I’ve said, are made for national interests as much as, if not more than, the profits and losses of each plant.

Under Scenario 1, next year’s imports would total 6.3m, falling to 3.3m tonnes in Scenario 2 and 2.2m tonnes under Scenario 3.

The above chart shows how these three different outcomes would affect China’s 2021 imports from its major trading partners compared with estimates for this year.

All three scenarios for next year assume that trading partners will win the same percentage shares of total Chinese imports as I expect them to win in 2020.

Look at the impact on China’s two top trading partners under these three scenarios, In the best-case outcome, China would import 1.2m tonnes from South Korea and some 430,000 tonnes. Imports from Singapore would collapse from 780,000 tonnes to 275,000 tonnes between the best- and worst-case outcomes.

Compared with this year’s imports from South Korea, which look set to reach around 1,3m tonnes, the worst-case outcome for 2021 of 430,000 tonnes would represent a 66% reduction.

My scenarios for China’s PP imports from its major trading partners in 2021 assume that they win the same percentage shares of the total China market as a I am predicting for this year.

What instead might happen is that the Regional Comprehensive Economic Partnership (RCEP) trade deal, which was signed last week, will result in member countries winning bigger shares of the China market than non-member countries.

This year, for instance, South Korea looks set to gain 20% of the total China market and Singapore 12%. But both are in the RCEP, as are Japan, Malaysia, Thailand and Vietnam.

An important feature of the RCEP is harmonisation of rules of origin. PP can now be imported by China from member countries at lower duties if it is re-exported as finished goods to any of the 15 countries in the RCEP. The 15 members account for about one-third of global GDP.

This could significantly disadvantage India, Saudi Arabia and Taiwan, which are not members of the RCEP. Their PP market shares might fall in 2021 as South Korea, Singapore, Japan, Malaysia, Thailand and Vietnam make gains.

As an important aside, I see the new trade deal as adding to the drift towards a bipolar world of two trading and geopolitical zones, one led by China and the other by the US.

And the implications of the RCEP serve as another example of why we cannot look only at plant-specific economics in judging industry-wide operating rates. 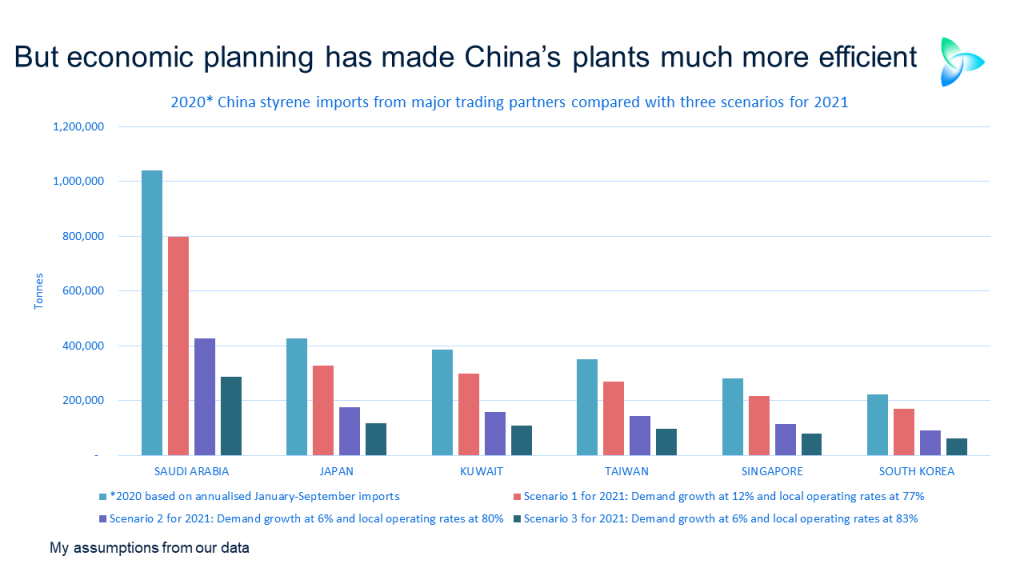 As with PP, it has been a great year for SM. If we again annualise the January-September import data, this year’s imports might total 3.1m tonnes, which would be around the same level as last year. Back in of the dark days of March when the pandemic first began, few people would have imagined imports would be this strong.

The reason was that in March, just about everyone I spoke with expected negative demand growth for SM in China during 2020. Instead, what we saw from January-September was 12% apparent demand growth. But the problem of China’s rapid capacity growth looms large. In 2021 over last year we expect China’s SM capacity to grow by 25% to 14m tonnes/year.

Scenario 1 for 2021 assumes that the 12% growth continues, with the operating rate averaging 77%, the same as our estimated operating rate for the first nine months of this year. This would leave 2021 imports at a total of 2.4m tonnes – a significant decline, but hardly the end of the world.

Under Scenario 2, I raise operating rates to 80% and cut demand growth to 6%. Imports drop to 1.3m tonnes.

In the worst-case outcome for importers, which is Scenario 3, demand growth is again at 6%, but capacity utilisation increases to 83%. Imports would fall to just 830,000 tonnes.

The chart at the beginning of this section again starts with estimates of China’s 2020 SM imports from its major trading partners, based on annualising the actual January-September data.

I also again use estimates of the 2020 market share of each of the major trading partners to arrive at Scenarios 1-3 for 2021.

China looks likely to import 1m tonnes of styrene from Saudi Arabia in 2021. The worst-case outcome for next year – 290,000 tonnes – would represent a 72% decline.

In a distant second place in 2020 market share looks likely to be Japan at 14%. Under Scenario 1, China’s imports from Japan in 2021 would be at 330,000 tonnes versus 120,000 tonnes under Scenario 3. Japan has an opportunity, however, to increase its market share because it is in the RCEP.

Note the headline on the chart at the beginning of this section – that China’s long-term economic planning has supported the cost competitiveness of China’s SM. The same applies to plants producing all the other petrochemicals. Here is why:

I must stress  that all the numbers above are for demonstration purposes only and are not the official ICIS numbers. The numbers represent only my opinions. But please be aware of this incontrovertible truth: China is pushing towards much greater petrochemicals self-sufficiency.

Our capacity data shows it is only a matter of time, when imports across several major petrochemicals sectors start to significantly decline.

What you must therefore do is build scenarios using our base-case for China’s import demand over the next decade. You then need to rank the scenarios by probability and build plans, under each scenario, about how you would retool your businesses.

New markets as an alternative to China will have to be considered. Some producers will have to adjust their plant operations away from the products most exposed to increased self-sufficiency. Some plants may have to be shut down permanently. SM clearly falls into this category as does PX, as a later blog post shall demonstrate.

If you again want help from our analyst team in this important scenario work, contact me at john.richardson@icis.com. Thank you.

PREVIOUS POST China's planned economy boosts global petchems this year but poses a self-sufficiency threat in 2021
NEXT POST China's PE imports in 2021 could be as high as 19.8m tonnes or as low as 16.8m tonnes