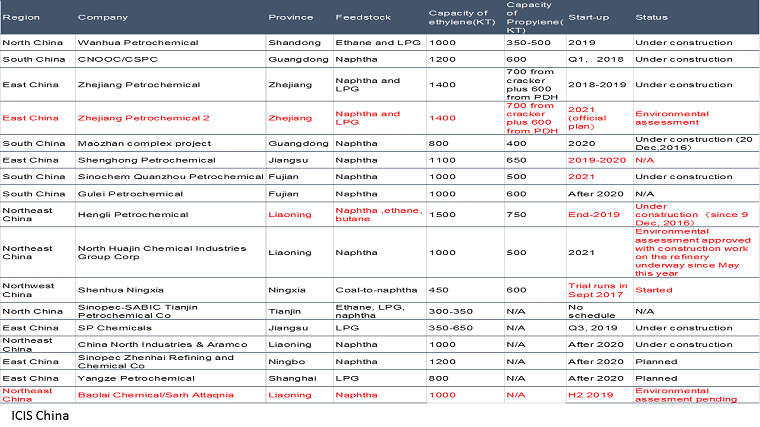 SINCE my last update on 18 September, our ICIS China team have discovered a further 2.4m tonnes/year of ethylene capacity being planned in China via the steam cracker process (see the updated table above, with the changes from September indicated in red).

There will also of course be more propylene via steam cracking than we expected in September, and an additional on-purpose propylene plant via the propane dehydrogenation process (PDH).

Then you need to add the ethylene and propylene capacities being planned via the coal-to-olefins (CTO) and methanol-to-olefins (MTO) routes.

The chart below shows what new CTO and MTO capacities we expect will be online by the end of 2019. 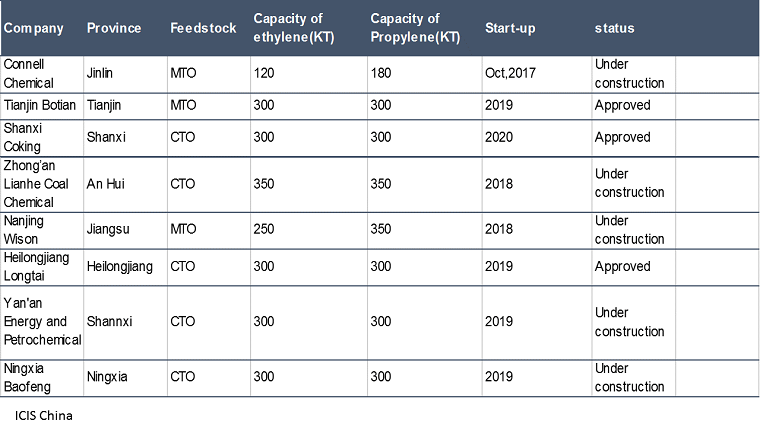 Put this all together and this tells us that:

Eight of the 14 new steam crackers will be integrated with new refineries. This will make the economics of these projects strong because of the close of availability of naphtha and other refinery-based steam cracker feedstocks.

Transfer costs for feedstocks might also add to the favourable economics, as some of the refinery/cracker projects are under joint ownership.

You can also see that there are plans for two crackers based entirely on LPG and several with a mixture of ethane, LPG and naphtha.

China has already been able to build a major wave of PDH plants based on imported LPG, thanks to the fall in international prices resulting from the US shale gas revolution.

Ethane is also of course abundant in the US, thanks to shale gas. This has led INEOS and Reliance to switch existing crackers from dwindling local ethane suppliers in Europe and India respectively to imported US ethane. But the jury seems to be out of whether this will prove a cost effective option for grassroots crackers in China.

And despite all of the cost and environmental pressures on the CTO process, coal remains a feedstock option for China. However, the start-up of around nine CTO projects has been delayed.

What this tells us about China’s petchems strategy

It is building world-scale steam crackers, eight of which, as I said, will be linked to new refineries. The flexibility to import LPG and possibly ethane feedstocks is set to further improve the economics of the projects. This fits in with the government’s determination to escape China’s middle-income trap by moving up the manufacturing value chain.

And because these refinery/petchems complexes will be state-of-the-art in terms of the emissions that they generate, environmental approvals for the projects that haven’t won approvals may well not be an issue.

A further environmental plus is that all of these complexes are to be located in chemicals industries parks, away from China’s big towns and cities. China is in the midst of two major campaigns to relocate hazardous chemicals plants from and improve the air quality in heavily-populated areas.

We don’t know the capacities that will be downstream of the new crackers, PDH, CTO and MTO plants. But we do know that it is Beijing’s intention to add derivatives where it has the biggest deficits.

In 2017, we expect that China will have to import 9.9m tonnes of PE, 3.7m tonnes of PP, 7.9m tonnes of ethylene glycols, mainly comprising MEG, and 3.2m tonne of styrene – and so this is where downstream capacities will be concentrated.

We also forecast that China will need to import 12.6m tonnes of paraxylene (PX) in 2017. Several of these new refinery/petrochemicals complexes will also include PX plants as China pushes towards much greater – or even complete – self-sufficiency in this product.

What we also know is that several of these refinery/petchems projects are privately owned. This is another element of economic reforms. China is trying to encourage greater involvement of private companies in key, strategic heavy industries (SOEs). By so doing it hopes to improve the efficiency of the SOEs through increased competition.

The wider context of China’s strategic approach to heavy industries such as petrochemicals is also important to understand here. These projects should make good money on a cost-per-tonne basis. But the government is pursuing much-greater petrochemicals self-sufficiency for the broader national aims of energy security, job creation and industrial value-addition. Financing from state-owned banks should, as a result, not be a problem – and could arrive on favourable terms.

Also note the involvement of three Saudi Arabian companies – SABIC, Saudi Aramco and now also the construction company, Sarh Attaqnia. It is a partner in the new cracker in Liaoning that was only announced in September.

The China-Saudi Arabia economic and geopolitical partnership is very important to track as it continues to strengthen:

The fact that China hasn’t also entirely abandoned CTO as a route to petrochemicals self-sufficiency could also be important.

Lower oil prices for longer than most people expect will remain a permanent drag on the feedstock economics of coal versus naphtha. And as China accelerates its environmental clean-up, CTO plants might well have to increasingly bear the cost of their “externalities” – their high levels of air pollution and CO2 emissions.

But in China’s Rust Belt, new jobs are at a premium because of the closure of inefficient coalmines and steel mills etc.  So, balancing the equation for the government may not be just about the cost-per-tonne economics and the environmental impact of CTO projects.

Balancing the equation might also involve generating new work in China’s Rust Belt. This may explain why some CTO projects have still won approval – and perhaps also preferential financing from the state-owned banks.

Some petrochemicals industry executives believe that because of this wider economic objective, the development of the CTO industry in China may have merely paused for breath. They believe that in a few years’ time capacity growth could speed-up again.