SOME people in the petrochemicals industry are showing great confidence in the future.

Perhaps it is no coincidence that several of these people are said to be Chinese domestic traders in polyethylene (PE) and mono-ethylene glycol (MEG) who might have long positions to protect.

But if PE is in genuinely wonderful shape, why do Asian high-density PE (HDPE) margins remain so depressed (see chart below)? 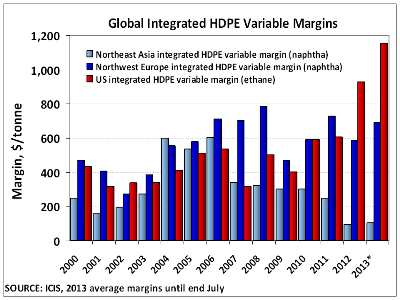 The blog finds it interesting, and perhaps useful, that iron-ore prices have increased at the same time as PE and MEG prices have surged.

“Iron ore prices have rallied to a three-month high amid increasingly bullish sentiment in China,” wrote the Financial Times in this 7 August article.

“The recent rally comes as sentiment improves across the Chinese metals sector. Macquarie, the Australian bank, said its most recent survey of Chinese steelmakers and traders pointed to a ‘marked improvement in sentiment’. Orders had improved and steelmakers were no longer destocking raw materials such as iron ore. Purchasing plans ‘have moved back up into positive territory, which should be supportive for prices”, Macquarie said.”

“The rally in iron ore prices comes amid broader strength in Chinese financial markets. The Shanghai Composite equity index has risen 3.6% in the past week, while Shanghai Futures Exchange steel prices have also strengthened.”

Iron ore prices have rallied despite the cooling of the Chinese economy and rising iron ore supply, the FT added.

We continue to worry that:

And as far as petrochemicals goes, it is worth remembering that oil prices reached a record-high for the year in early July and remain at elevated levels (see the chart below). 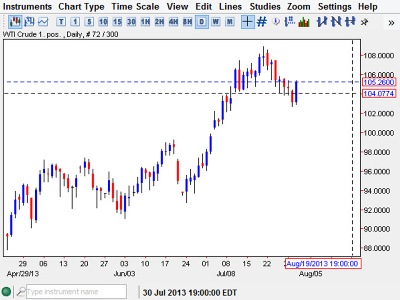 You can argue until the cows come home about supply, demand and other factors justifying increases in particular petrochemicals markets.

This blog is prepared to argue, until several fields of cows come home, that, when it comes to the real macro-economic environment, none of the arguments being used to justify higher petrochemicals prices stand up to close analysis.

“The answer to why some markets are better than others is simply that in the better markets, there are more people wanting to buy than sell,” said one industry observer.

That’s all you, perhaps, really need to know….

By John Richardson THERE has been a strong recovery in China’s synthetic fibre...

China Export And Import Data May Obscure The Real Picture

By John Richardson CONFUSED? Perhaps, as was definitely the case last Friday, yo...