THE chart below is worth revisiting, and pondering again, as we attempt to assess the future of polyethylene (PE) exports to China. 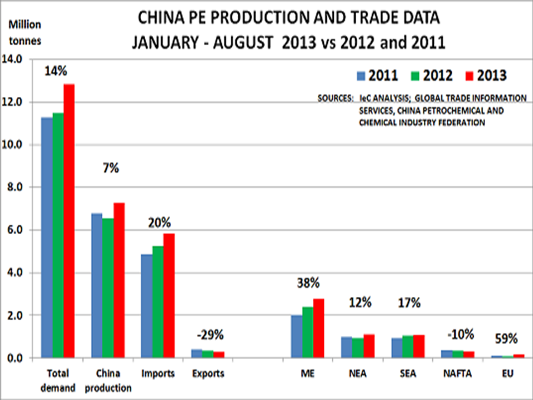 In the case of the Middle East, as the chart shows, it has been a case of “so far so good” in 2013. Overall PE import volumes from the Middle East are up by 38% in January-August this year.

Middle East HDPE imports in particular are up by around 30% – thanks to big gains by Iranian and Saudi Arabian producers.

These volume gains have been made on the back of a 14% increase in apparent PE demand (domestic production and imports) as a whole, and an 18% rise in apparent demand for HDPE.

But we have long argued that this year is misleading because of a temporary return to stimulus-driven GDP growth. When inventory effects are subtracted from the picture, most producers and traders we have spoken to think that actual, underlying PE growth in China will only be 3-6% this year – and they see this is a realistic range of numbers for next year and beyond as China’s economy shifts to a new growth model.

The Middle East might still, however, gain a greater share of a lower-growth China market – most obviously because their feedstock cost position looks set to remain the best in the world.

Middle East petrochemicals producers might also benefit from geopolitics, as my fellow blogger Paul Hodges has pointed out. The Saudi-China relationship, in particular, has become very important because of China’s increasing dependence on crude-oil imports. Crude oil and petrochemicals imports might, therefore, be geopolitically linked.

And so what about the prospects for US exports?

As you can also see from the chart above, the picture so far this year is not good as North American Free Trade Agreement (NAFTA) exports in general are down by 10%.

This might be because of stronger local demand, for instance, (we haven’t looked into the specifics).

But what is very clear is that this position must change, and it must change dramatically. As my colleague Nigel Davis points out in this very thoughtful Insight article, quoting a new Accenture study into petrochemicals:  “Demand for the products finally made from ethylene is expected to grow at only about 2% in North America, Accenture says, maybe more if North America’s re-industrialisation continues, and way below the 64% increase in ethylene capacity (an additional 11m tonnes/year of ethylene) there might be if all announced capacity additions come on-stream.”

In terms of cost competitiveness, of course, the US is now in a fantastic position. It is probably not that far behind the Middle East.

Even if the answer is “no”, the US might still find enough room to export lots of extra volumes to China – alongside the Middle East – because of consolidation in Northeast Asia.

But the blog has been hearing about the need for cracker shutdowns in Northeast Asia since the late 1990s and very few shutdowns have actually happened.

Many Northeast Asian complexes are fully depreciated and well- integrated – i.e. they don’t just run to make low-margin PE, but also operate to make other higher-margin products. Shutting down a PE plant is therefore not always a straightforward decision.

And talking about geopolitics again, how do we factor in the relationship between, say, China and South Korea?

This is the kind of technology that China needs as it seeks to move up the manufacturing value chain, whereas petrochemicals exports are important for the South Korean economy as a whole.

On this point, it is also worth mentioning the risk posed to global PE supply and demand balances by all the projects being planned in Southeast Asia -f or example, in Indonesia. Some of them may go ahead for wider nation-building reasons, even if on a narrower feedstock- cost basis they cannot compete with the US. Plus, Southeast Asian exports enjoy import-duty advantages, thanks to the ASEAN-China Free Trade Area.

And finally, what about the future of the ethane cost advantage in the US?  We will discuss this in a later blog post, but suffice to say here – as applies to all the above – there are a broad range of potential outcomes.