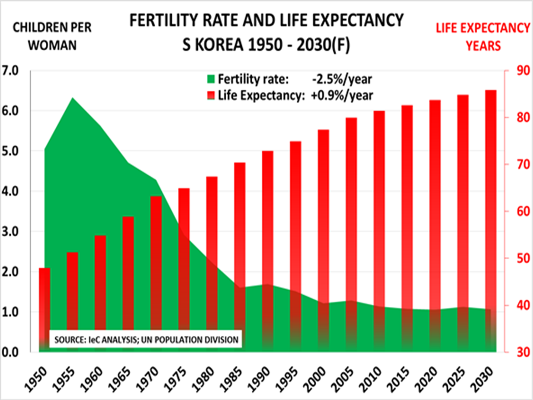 THE blog has been long on South Korea ever since its first visit in 1997.  Its economic achievements since the horrors of the Korean War are nothing short of amazing.

Bereft of natural resources, all it has had to rely has been its intellectual capital and, wow, look at how it has progressed from the mass manufacturing  of low quality finished goods to becoming the producer of globally recognised high-value electronics and automobiles. It is one of the few countries to have successfully escaped the “middle income trap”.

But now South Korea is yet another example of how demographics will shape global economic development over the coming decades.

Sure, if you want to carry on assuming that GDP growth will remain constant because there’s always “pent-up” demand, that’s fine. We worry, though, that if you do you, and you use this as the only basis for planning, your chemicals business will struggle.

This is evolving stuff, incredibly complex – and so the debate is the thing. Only through constantly reviewing where we are at will we get close to being able to estimate future patterns of demand.

And so in South Korea – as this excellent Economist article points out – some of the key variables around the impact of demographics include the success or failure of:

This last point leads to the obvious conclusion that once South Koreans start having more babies everything will get back to normal.

True, but what about the time lag? It will take 20-30 years before any rise in the birth rate fixes the problem.

What about greater immigration and reunification with North Korea? According to The Economist, both of these would make only a marginal difference.

And so South Korea has to get on with dealing with these inescapable facts:

Burying one’s head in the sand is obviously one option, but, luckily, it looks like South Korea is adopting a very different approach.