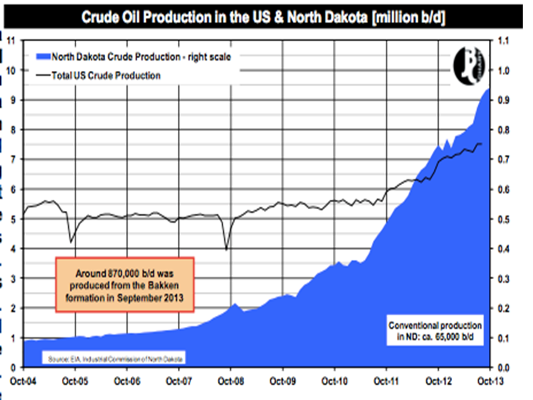 PAUL Satchell, the UK-based chemicals analyst with glob investment bank Cannacord Genuity wrote  in his December Volume Proxy* report, which was released earlier this month: “It has long been our opinion that real demand fundamentals in commodity chemicals have been so poor since mid-2010 that inventory cycles have become the prime determinant of marginal demand.

“Hence, since then, the rare quarters where volumes (in basic chemicals) have been decent, have coincided with periods of robust outlooks for oil prices.

“Naturally, these have been followed by de-stocking when oil prices softened. While today’s update of our Volume Proxy shows recovery to a neutral level, we remain very cautious on the state of true demand for the commodity end of the chemicals spectrum.

“The recently robust outlook for oil prices (outside the US) have been a substantial factor in the recovery of apparent demand, in our view.”

As we discussed last week, a bullish outlook for crude – along with greater availability of credit – has led to stocking-up in polyethylene (PE) in China. Whilst apparent demand (imports plus local production) grew at 14% in January-October of this year, several producers we have spoken to estimate real, underlying demand growth at only 4-6%, when inventory building is taken out of the equation.

We suspect that this is a pattern common to other chemicals and polymers in China and elsewhere.

So the risks of an oil-price retreat – and thus a disorderly de-stocking process down several chemicals and polymer chains – might be higher right now than for several years.

If we could predict the price of oil we would, obviously, not be sitting here typing this blog post. We would instead by lying on a yacht somewhere.

But there is a strong argument to be made that chemicals stock building has come just before a significant retreat in the price of crude.

Why? Because there is a growing consensus in the oil market that, at least in the short term, rising US shale oil production and the easing of sanctions of Iran – thanks to the nuclear deal – promise a softening in prices.

The US is now producing 8 million barrels a day of crude for the first time since 1989. The chart above shows this production surge and the importance of the North Dakota field in the US oil revolution.

The surge in US output has so far had little impact on oil markets because of the Iranian sanctions, the lingering effects of the civil war in Libya and security problems that continue to severely curtail output in Iraq.

But as the Associated Press wrote in an article earlier this month:  “Iran’s agreement to limit its nuclear programme is still only a preliminary one. Sanctions on its oil exports are likely to stay in place until a final deal is reached, which – if it happens – is unlikely before mid-2014.

“If and when the sanctions are lifted, Iran says it wants to ramp up production to pre-sanctions levels of 4 million barrels a day.

“Iraq also wants to reach that target within a year, while Libya hopes to increase output to 2 million barrels a day once unrest ebbs. In all, that would add close to 4 million barrels to total daily production.”

Iran also has an estimated 26 million barrels of crude in floating storage, according to Societe Generale, in territorial waters which have been quarantined due to Western sanctions.

If the “perfect storm” of higher US production, combined with greater output from Iran, Iraq and Libya does, indeed, hit the oil markets in 2014, how might OPEC respond?

There is a growing consensus that OPEC might struggle to exert its previous influence on markets because of the differing priorities of its members.

“OPEC was organised in the early 1960s by Saudi Arabia, Iran, Iraq, Kuwait and Venezuela with the primary goal of unifying the five countries’ oil export policies – and hopefully dictating a high price for their oil,” wrote Stratfor, the global intelligence company, in this analysis.

“The five countries certainly possessed that power when the cartel was initially formed, and while the cartel still produces about 40% of the world’s oil, OPEC’s dominance has declined over the years.

“Today, only Saudi Arabia and to a certain extent the United Arab Emirates, Qatar and Kuwait retain the ability to voluntarily adjust production levels. Libya, Algeria, Nigeria, Ecuador and Angola [other OPEC members] – must maintain production to finance their national budgets.

“Effectively, this means that OPEC wields nowhere near the power it once did. Even a producer of Saudi Arabia’s size is barely able to change the price of oil through boosting or cutting production.”

There is also a geopolitical aspect here as a result of Iran’s rivalry with Saudi Arabia.

Bijan Zangeneh, Iran’s oil minister, recently suggested that his country would continue to raise output, even if prices fell to as low as $20 a barrel.

And what about the decline in demand for crude, and its products, caused by the ongoing and unresolved economic crisis in the West, along with ever-great fuel efficiency? US consumption of petroleum products is, for example, 10% below its 2005 peak.

Finally, also, to what extent has speculation supported crude-oil prices? Will some of the speculators head for the hills in 2014 on US Fed tapering and a slowing Chinese economy?

But might some unconventional producers continue to run in order just to cover variable costs?

Middle East production costs can also be as low as $20 a barrel! This underlines the risk that some countries might continue to pump more and crude, even in the event of a sharp retreat in prices.

Complacency might be another risk in scenario building. Fellow blogger Paul Hodges has pointed out that prices have been relatively stable, and at very high levels, over the last three years. They have ranged between $100-120 a barrel.

A strong downside scenario for oil prices must surely, therefore, be worth building into your 2014 planning process.

*The Volume Proxy indicator gauges volumes, and thus demand, through weekly changes in 33 spot chemical prices in the US, Europe and Asia, as assessed by ICIS.