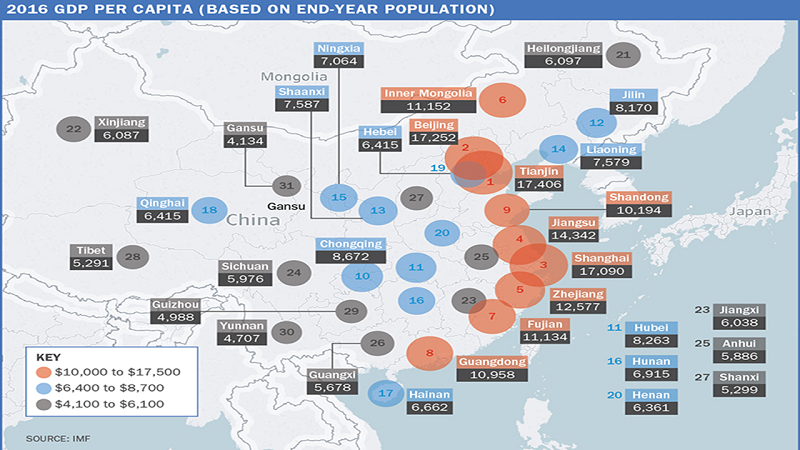 THE ONLY China that most foreigners have visited, including myself, is the southern and eastern seaboard provinces where all the talk is about booming poylolefins and other polymers demand on the rise in middle class consumption.

So strong is middle class consumption growth via mobile internet sales that the multiples of polyethylene (PE) and polypropylene (PP) demand growth over GDP seem to be increasing in these rich provinces.

This is the result of all the packaging material needed to ensure that goods bought over the internet arrive at their destination undamaged, during a period of an intense battle for market share between internet sales giants Alibaba, Tencent and JD.com.

The end-result might be that in rich China even if GDP growth slows down over the next few years, there is little or no negative impact on the growth in polyolefins consumption. Some of kind slowdown in GDP growth seems inevitable as economic reforms accelerate.

And what if you then built scenarios around how successful China is in closing this yawning per capita income gap?

This would produce two results:

This will be a topic for my future data crunching, when I will provide you with a map of regional per capita polyolefins consumption – along with scenarios for how the map might change.

Meanwhile, you must consider the scale of both the opportunities and challenges represented by China’s attempt to close its income gap. As the New York Times writes:

Even as Chinese cities have turned into playgrounds for the nouveau-riche and the swelling ranks of the middle class, nearly 500 million people, or about 40 per cent of China’s population, live on less than $S5.50 per day, according to the World Bank.

A key objective for the even more powerful Xi Jinping

He is now in a better position to accelerate economic reforms in general, including dealing with income disparity.

At the same time, though, because he has made eradicating poverty such a central part of his mission, he could be judged harshly if his efforts fall short of public expectations.

How important he views narrowing the income gap was evident from his keynote speech during the congress, in which he pledged to “leave no-one behind in the march towards common prosperity”. He also pledged to end poverty in China by 2020.

A challenge that Xi and his fellow reformers face is that as they tackle the overcapacity, bad debts and environmental degradation being caused by China’s old, heavy industries, jobs will be lost in China’s poorer provinces. This could obviously make the income gap between rich and power widen rather than narrow.

Take China’s rustbelt, its northeastern provinces, as a good example – Heilongjiang, Jilin and Liaoning (again see the above map).

Many of China’s coalmines are in the northeast, and of course it is the coal industry that is responsible for much of China’s pollution crisis. Plus, many smaller mines have poor economics. China needs to find 2.3m new jobs by 2020 to replace the jobs being lost in all of the coalmines that it plans to shut.

Cleaning up the environment is as big a priority as closing the income gap.

A sign of just how serious China is about dealing with pollution was the announcement during the congress of the plan to cut concentrations of hazardous fine particulate matter (called PM2.5) in the air from 47 micrograms per cubic metre in 2016 to 35 micrograms by 2035.

So far this year, as many as 40% of China’s factories have been temporarily closed by safety inspectors, with officials from more than 80,000 factories charged with criminal offences for breaching emissions limits. Some 12,000 local government officials have also been disciplined for allowing their towns, cities and provinces to breach air pollution limits.

The problem that Xi faces is that he has staked his credibility on both closing the income gap and solving environmental crisis. How will he square this circle?

A way of squaring the circle could well lie overseas, through the One Belt, One Road (OBOR) project.  The importance of the OBOR was underlined during last week’s congress, when the initiative was written into the country’s constitution.

The “belt” part of the OBOR, which is in fact better fact roads and rail links within China and between China and its fellow OBOR members, is about raising the income levels of poorer China.

Closer links to other countries could allow China to source the safe food it needs, at the right cost and in the right quantities, from say Tanzania in Africa. Tanzania has a median age of just 18 compared China’s 33.

The east African country has plenty of surplus labour to work on its fertile soil because of its demographics. But it has a very an inefficient agricultural sector that might benefit from Chinese investment.

Closer economic and geopolitical ties via the OBOR could also enable China to source the technologies it needs to build a more sustainable economy –i.e. the chemicals and other technologies needed to clean up its air, water and soil. These industries would also generate new employment to replace jobs being lost in the old, heavy industries.

But there is a geopolitical risk

Xi, again during the pivotal congress meeting, said that “China must become strong”. This is a different objective than during the Deng Xiaoping era. Deng’s objective was that China must “get rich”.

The language during the congress was about peaceful win/win overseas links. But how will China’s more assertive overseas presence fit with Donald Trump’s “America First” approach.

Does America First versus a stronger China reduce or increase the risk of a geopolitical clash between the US and China? If a major geopolitical clash did take place, then all of Xi’s economic reform objectives would be in jeopardy. So would the global economy.

None of us course know the answers to any of other questions I’ve raised in this blog post.

But what’s crystal clear to me is that a one-size fits-all approach to forecasting the growth in China’s economy, along with its petrochemicals and polymers demand, would expose your company to unnecessary risks.

You need to be positioned for all the potential upsides and downsides during a period in China’s economic development where the uncertainties have probably never been greater.

PREVIOUS POST How US Polyethylene Exports To China Could Come To A Halt
NEXT POST Benefits, Risks Of Petronas/Aramco Deals Serving As Template