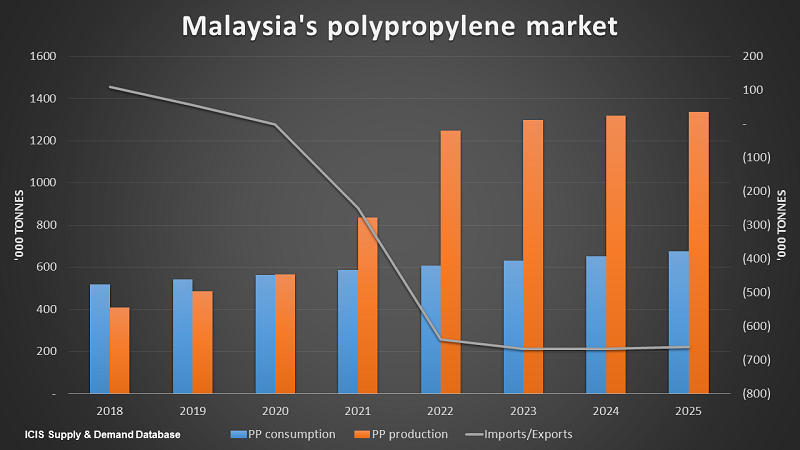 THE PETRONAS and Saudi Aramco joint ventures in the RAPID refining-to-petrochemicals project in Malaysia may serve as a template for further “win/win deals”. Whilst these deals will substantially benefit the companies and countries involved, there are broader risks that I’ll discuss at the end of this blog post.

Back in February, Aramco agreed to take a stake in the overall RAPID project. This 50% stake will include supplying up to 70% of crude to the RAPID refinery.

Then in October, Aramco took a further stake in the project through an additional 50% share in the polyethylene (PE), polypropylene (PP) and ethylene glycols (EG) projects that will be downstream of the refinery. These project will be operated by the Petronas spun-off listed company, the Petronas Chemicals Group.

Aramco wins here as the world approaches Peak Oil Demand. Saudi Arabia must find a way of avoiding leaving its most valuable national asset in the ground as consumption growth in oil falls on the electrification of vehicles.

The world is moving to electric vehicles for environmental reasons. Broader environmental pressures could further dampen crude demand, as could the drag on global growth caused by ageing populations.

If Saudi Arabia continues to win guaranteed off-take of crude through investments in further refinery-petrochemicals projects, this will help solve the problem.

And from the Petronas perspective, crude supply from Aramco will bolster the economics of the project.

From the wider perspective of the Malaysian nation, the $27bn RAPID project will greatly boost its economic development. We already seeing evidence of this, as the project’s construction activity helped raise Q2 2017 growth to 8.3%.

The longer term benefits include raising the “value add” of the economy as Malaysia tries to escape its middle-income trap. It has an ageing population and so needs to move up the manufacturing value chain to justify higher labour costs. The RAPID project includes a state-of-the-art refinery and production of value-added polymers such as synthetic rubber.

There are also the benefits to Malaysia from the big volume of jobs created during the construction phase, the permanent jobs created when the complex is operating and the additional export revenues.

The importance of the One Belt, One Road connection

Both Malaysia and Saudi Arabia are part of China’s $1 trillion One Belt One Road (OBOR) initiative, which aims to create the world’s biggest-ever free trade zone – an EU on steroids at a time when BREXIT threatens to weaken the EU.

As China confronts the challenge of the America First agenda, the OBOR may well speed up – especially now that it has been written into China’s constitution following the recent 19th National Congress political meeting.

The implications for petrochemicals are as follows:

This is the context in which it is important to view the slide at the beginning of this post. The slide shows that the RAPID project will see Malaysia’s position on PP moving from a deficit of around 100,000 tonnes in 2018 to exports in the region of 650,000 tonnes per year in 2022-2025, according to ICIS Consulting data.

The RAPID project will also see Malaysia shift from imports of PE totalling around 500,000 tonnes in 2018 to just about a balanced position by 2024.

On the surface, these might seem quite alarming shifts in Malaysia’s balances. But the people behind this project can quite rightly argue strong import demand from China – and potentially strong demand growth in the ASEAN region. ASEAN economic growth could enjoy knock-on benefits from the OBOR, as the whole of the ASEAN trading bloc is in the OBOR.

You might have noticed, though, that I put the phrase win/win in inverted commas in my first sentence.

Whilst Aramco and Petronas can lay firm claims to many mutual benefits from the RAPID project, there are also risks as well as benefits of this becoming a template for other investments.

I see a world where petrochemicals investments could increasingly be driven by the need to find a home for oil and the desire to generate local jobs. These investments, more likely than not, will happen within the OBOR to help serve China’ big deficits.

Globally, we are already face oversupply in PE as a result of all the new US investments and other products could follow.

What might this mean for the profitability of the petrochemicals companies outside the OBOR region?  I think you know the answer.