2018 Oil and Petchems: Risk Of Mistaking Apparent For Real Demand 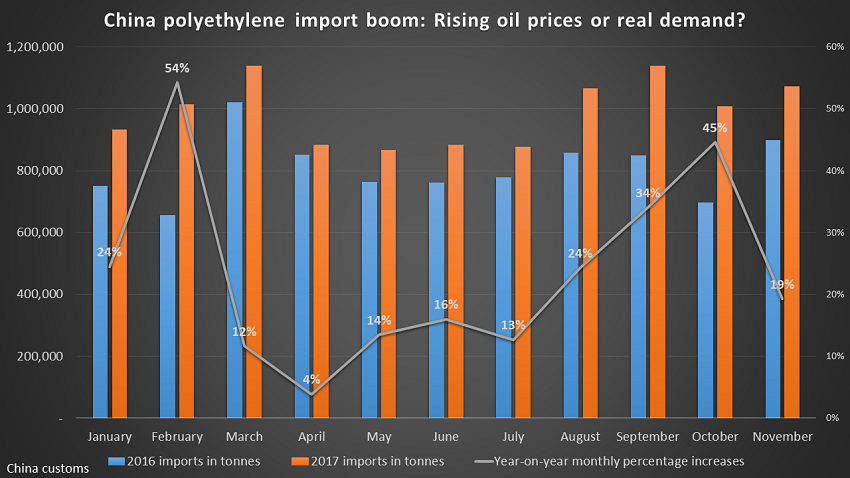 PERHAPS the most important recent single paragraph of analysis, in the huge volume of analysis out there about oil markets, was this from Nick Cunningham in a 24 December article on oilprice.com:

The [global crude] inventory surplus [OECD numbers] has dramatically narrowed this year, falling to just a little more than 100 million barrels above the five-year average as of October, down more than two-thirds from the start of 2017.

That obscures the fact that the drawdowns really kicked into high gear only in the second half of this year, a rapid drawdown that coincided with a sharp uptick in prices.

This tells us two things:

On Point 1, nothing has changed regarding the fundamentals of oil demand. Yes, markets have of course tightened as a result of the OPEC production cutbacks with geopolitics adding a substantial premium to the cost of crude.

But if real, long term demand was that good, then inventories would already be back below their five-year average. Instead, we are moving towards Peak Oil Demand quicker than many people assume. This is the result of environmental concerns and demographics.

Let’s look at trade data on polyethylene (PE) as a pointer towards how much rising oil prices might have distorted the key China market. The above slide shows the year-on-year percentage increases in China’s PE imports in January-October 2017, which is the latest available data. It also shows the volume of imports in tonnes compared with 2016.

As you can, each month saw strong percentage and volume increases, with the percentage rise at no less than 45% in October. Imports for the whole of the January-November 2017 period totalled around 10.9m tonnes, up from approximately 9m tonnes during the same eleven months in 2016.

Yes, China’s economy is set to have grown by an uexpectedly strong 6.9% in 2017. But come on, this cannot be all real demand growth, can it? There must have been some stock building – especially in October as November and December real demand has been weak in China. November and December are off-peak months for consumption. The economy has been further dampened by the winter campaign to reduce air pollution. This has led to the closure of many factories.

OPEC might decide at its next meeting in June that it has done its job is done – that oil markets have been rebalanced – and it is time to increase output. Even before the meeting takes place, OPEC members could began to ease back on their compliance with the cutbacks in order to take advantage of strong pricing.

Sooner or later, Russia, the world’s biggest non-OPEC producer, may also decide to reverse its support for OPEC and increase its output. It has indicated it will do so as soon as inventory levels have fallen back to what it considers are normal levels.

Nobody should be surprised by these numbers, given the extra capital now pouring into the US shale patch in response to the rally in crude prices. Another reason for the resurgence in shale oil production is the continuing fall in production costs on improvements in fracking technologies.

Hedging is another reason for the increase in shale-oil output. Globally, oil producers have increased their hedging positions by a millions barrels a day in H1 2018. The shale producers can thus pump and pump, secure in the knowledge that if this causes prices to fall, they have financial protection.

Clearly, therefore, if OPEC decides that the job of rebalancing the market has been completed and if Russia raises output, there is a substantial risk of a sharp retreat in today’s oil prices.

Where would the bottom be, given that real demand growth is weak? We would then be in a classic destocking process as raw material inventories up and down all the manufacturing chains are depleted. This would add momentum to the fall in crude prices.

Equally, of course, today’s geopolitical tensions could worsen. These disruptions include political unrest in Iran which could lead to more US sanctions if the Iranian government clamps down hard on demonstrators. In any event, it looks unlikely that President Trump will re-certify the Iranian nuclear deal on 13 January. The outcome could be reduced Iranian oil exports. Iran represents more than 4% of global oil supply.

Plus, there are the the ongoing Iran-Saudi Arabia tensions, the fall in Venezuelan output resulting from its economic crisis and North Korea’s nuclear weapons programme.

As with the global economy, which I discussed on Monday, petrochemicals companies need lots of scenarios for crude-oil prices in 2018. Fellow blogger Paul Hodges writes in his ICIS Chemical Business New Year economic outlook:

Last year, it was reasonable to use $50 a barrel as a base case forecast for oil prices, and then develop upside and downside cases using a $5 a barrel swing either way. But today’s rising levels of uncertainty suggest such narrow ranges should instead be regarded as sensitivities rather than scenarios. In 2018, the risks to a $50 a barrel base case appear much larger.

It is thus perfectly possible that crude will be at $70 a barrel or more throughout this year. This would greatly add to the global inflationary pressures. What then for interest rates and stock markets?

Or oil could suddenly collapse to $40 a barrel or less. At the level of the petrochemicals industry, this could create major problems for companies that have mistaken apparent demand for real demand. China’s PE market and its extraordinary rise in 2017 imports might end up serving as a good example of this confusion.