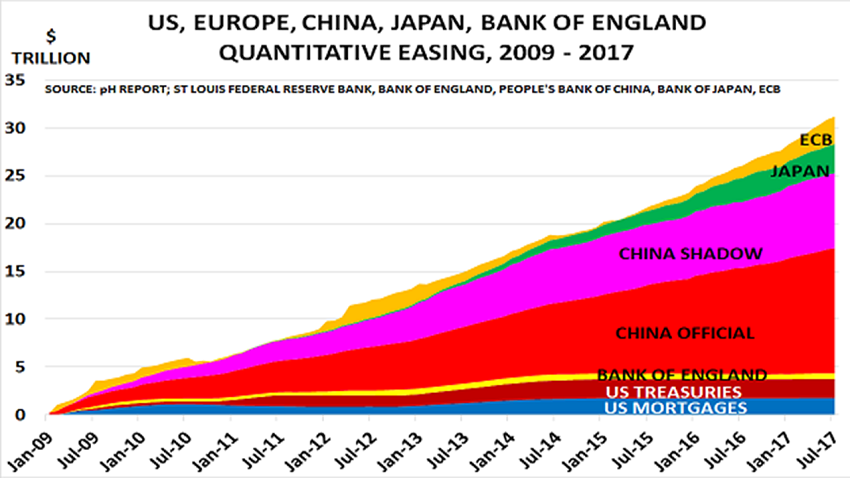 IN TODAY’S world of soar-away stock markets backed up by the notion that the sustained global economic recovery will not be derailed in 2018, there is a need to detail the major risks out there.

Take a close look at the above chart – an updated version of the chart I’ve been running over the last four years. It shows the rise in central bank lending in the post-Global Financial Crisis period.

As the FT points out, this year could represent an inflexion point: Global monetary policy has been a multi-trillion dollar relay race over the past decade. But in 2018, there will be no one to pick up the baton, setting up a potentially anxious year for the world’s bond markets.

The newspaper argues that this will be in sharp contrast to recent years during which the proverbial baton was smoothly handed over from one Western bank to the next. When the Fed began to cut back on bond buying, the Bank of Japan increased quantitative easing. And by the time the Fed started to increase interest rates, the European Central Bank had begun several major waves of  monetary stimulus.

But these three banks – along with the Bank of England – are set to cut back on monetary stimulus this year, with the risks represented by this coordinated withdrawal largely overlooked. Robert Michele, chief investment officer of JPMorgan Asset Management, told the FT: The coming changes in global monetary policy is nowhere near priced in and is actually grossly underestimated.

What might happen to bond yields? Torsten Slok, chief international economist at Deutsche Bank, said in the FT article that by the end of this year, ten-year German Bunds, UK gilts and US Treasury yields will be at 1%, 2% and 3% respectively. These would be a big increases from late December last year when Bunds were at 0.45%, gilts at 1.26% and Treasuries at 2.44%.

Higher bond yields would translate into less flow of money into risky assets such as equities. If stock market disappoint, what then of economic confidence in the West?

But as the chart at the beginning of this post reminds us, by far the biggest source of economic stimulus since the Global Financial Crisis has been China.  Its central bank, the People’s Bank of China (PBOC), has pumped more money into the global economy than the other major central banks combined. The explosive growth in China shadow, or unofficial, bank lending is also detailed in the chart.

The risk is that as Western central banks withdraw economic stimulus, so will China.

China: A Year of Dealing with Excessive Risk

An announcement by China in December was nothing short of surreal. Online lenders have been prohibited from making loans to people with no income, and their interest rates have been capped at 36% per year (yes, 36%!). A ban has also been imposed on the start-up of new online lenders.

In an economy where the only way seems to be up, lending to people with no incomes at interest rates even higher than 36% has made sense (shades of US sub-prime here?).

But the government’s decision to clampdown on online lending reflects growing concern over consumer debt.

Private debt has more than doubled since 2012, according to the Bank for International Settlements. Short-term consumer loans outstanding rose by 41% in January-November 2017 on a year-on-year basis, according to China’s central bank. This compared with 13% growth in overall lending. Most of these short term loans came via online lenders.

The scale of the consumer-debt risk was further emphasised by the 80% surge in short-term loans in November alone – again compared with the same month last year. In a sign that Beijing’s long-running whack-a-mole game continues, many of these loans were taken out to circumvent new restrictions on real-estate lending.

A further announcement in December also points to a willingness by Beijing to deal with excessive financial risk. This related to wealth management products (WMPs). From now on, sellers of these highly speculative investment products can no longer guarantee investors rates of return, but must instead value the products based on their daily net asset values.

This brings WMPs into line with mutual funds in the West, with the reform seen as pointing towards a major overhaul of the shadow-banking system. This follows a sharp contraction in shadow lending in 2017 as Beijing replaced this lost credit with more financing through the more regulated official banking system.

Will this be a year when Xi Jinping and his fellow economic reformers get really serious about tackling excessive risk in the financial system? Or could we see something even more dramatic – a sharp contraction in overall lending growth as the whole of the economy is deleveraged?

With GDP growth set to register an unexpectedly strong 6.9% increase in 2017, China seems to have the economic cushion to opt for this harder, second option.

You should, as a result, build a wide range of scenarios for Chinese GDP growth in 2018 – from just a few percentage points lower than last year to 6% or even less.

There is another outcome to consider and that is China losing control of events. As Zhou Xiaochuan, PBOC governor, warned last October: If there are too many pro-cyclical factors in the economy, cyclical fluctuations are magnified and there is excessive optimism during the period, accumulating contradictions that could lead to the so-called Minsky Moment.

A Minsky Moment is a sudden collapse of asset prices after a long period of growth, sparked by debt or currency pressures. The theory is named after economist Hyman Minsky. Such a moment led to the Global Financial Crisis.

The feedback loop for the global economy is obvious here. Any of these China scenarios could combine with the coordinated withdrawal of Western central bank stimulus, bringing today’s excessive complacency to an abrupt end.

And as a reminder: The China Inflation Threat

Let’s imagine that Chinese GDP growth remains as good, or almost as good, as last year. Perhaps this will be because Beijing backs away from even a moderate reduction in excessive financial risks.

There are plenty of competing interests that could produce such a result. Take the WMP reforms as an example, where the FT again reports that banks are collectively lobbying for an easing of the new restrictions.

Consumer-lending restrictions might also be relaxed because of the negative impact on economic growth of the two connected reforms that I see as entirely non-negotiable: The restructuring of over oversupplied industries and the environmental clean-up.

All good then? No need to stress over China withdrawing stimulus and thus compounding the impact of Western central bank tightening in 2018? Not necessarily because of the inflation implications of the two non-negotiable reforms.

As I described in early December, the temporary shutdown of as much as 40% of Chinese manufacturing capacity in 2017, as an unprecedented wave of environmental inspections took place, led to a sharp price in China’s Producer Price Index.

Some of the factory closures were permanent as China, in parallel with the environmental clean-up, pressed ahead with its supply-side reforms.

China will remain the No1 workshop of the world in 2018.  Further increases in China’s producer prices would therefore add to consumer-price inflation in the West.

Interest rates are already on their way up because of the coordinated withdrawal of Western central bank stimulus. Add the China inflation factor to the mix and central banks could be forced to raise interest rises more aggressively than consensus opinion assumes.  This would make debt repayments much harder and would jeopardise the global economic recovery.

It is still about demographics

Nothing changed in 2017. There was no demographic miracle where lots of young adults suddenly appeared from nowhere, dropped from the sky by a giant flock of storks, replenishing shrinking working-age populations. The retirement of the Babyboomers remains a long-term drag on global economic growth.

Equity markets are ignoring every other risk and so they are of course ignoring this fundamental economic weakness.

There is a link here to other themes of this blog post:

Everything might turn out to be fine in the end. That’s certainly a scenario. But sensible chemicals and other companies have to plan for different outcomes.

PREVIOUS POST The Blog Is On Holiday Until 3 January
NEXT POST 2018 Oil and Petchems: Risk Of Mistaking Apparent For Real Demand