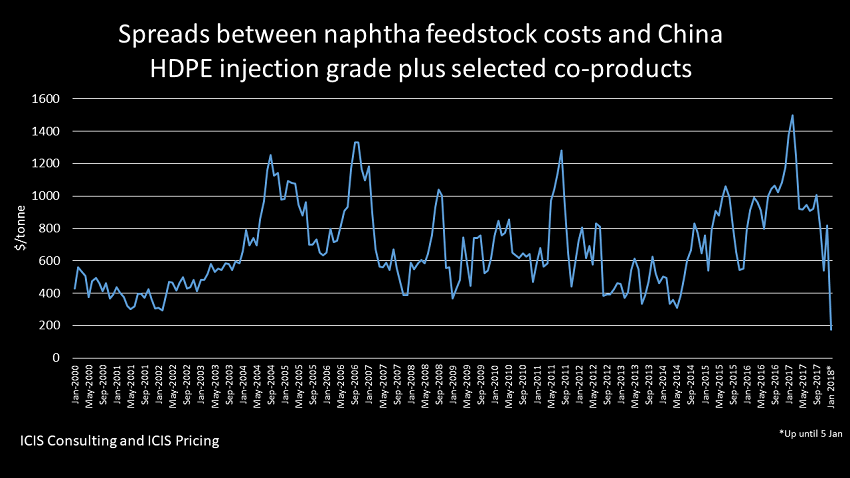 ASIAN naphtha-to-polyethylene (PE) spreads collapsed by 80% in the first week of January compared with December last year because of the failure to pass on the rise in naphtha feedstock costs resulting from higher oil prices.

In an update of the chart I’ve been running since late last year, what you see are the spreads between naphtha costs and a tonne of high-density PE (HDPE) injection grade plus selected co-products.

You then add these values to the price of a tonne of HDPE to get the combined spread between all the product values and naphtha  costs. Missing are other co-products, such as hydrogen and fuel-oil type products. But you get a general and acceptably accurate picture.

This should be a wake-up call for those people who equate today’s rising crude prices with a strong global economy:

This obviously tells us that Asian naphtha cracker operators are struggling to pass on higher feedstock costs to their customers. In a strong demand environment, the cost pass-through would not be a problem. This runs counter to all the complacent talk of a synchronised global economic recovery. So, what’s going on?

China’s PE imports continued to surge in Q4 after what had already been a very strong year for growth. This suggests substantial buying ahead by PE converters and traders. It is more than likely that they stocked-up on resin ahead of anticipated further increases in oil prices, naphtha costs and in turn PE prices.

But PE prices in December and so far this year barely moved because of a.) The high inventory levels resulting from this stock-building, and b.) The start-up of new Chinese PE capacities. In March, as we shall detail in our January ICIS Asian PE Monthly Price Forecast Report, 700,000 tonnes/year of new capacity is due on stream. This follows the commissioning of 920,000 tonnes/year of new capacity in H2 2017.

The Lunar New Year holidays are also only just around the corner. Just about the whole of China will shut down on 15-21 February, meaning that buying activity will soon decline.

A further dampener of economic activity is the winter air-pollution campaign that has led to the closure of plastic processors. The campaign comes to an end in mid-March.

As a result, I forecast that China PE pricing across three major grades (HDPE injection grade, low-density PE film grade and C4 linear-low density PE film grade) will only edge-up in January despite much stronger crude and naphtha. I then expect prices to fall in February and December. Subscribe to my report for the actual numbers.

Q1 is going to see a squeeze on profitability. This will perhaps not be as severe as the first week of January when trading volumes will have been thin. But I expect that cracker operators will continue to struggle to pass-on higher naphtha costs.

I could obviously end up with proverbial egg on my face. That’s always the risk of forecasting. But my aim is to help petrochemicals companies adequately plan for the future by building sensible scenarios. If I merely repeated the conventional wisdom I would be falling short of this objective.

Here is therefore a reminder of five areas of broader risk I have highlighted in blog posts over the last few weeks:

The right level of debate

I could, as I said, so easily be wrong. This year may turn out to be another stellar year because of the truth behind the overused phrase, “a synchronised global economic growth”.

But exactly why is the recovery global, why is it synchronised and why will it continue? And precisely how will this recovery be sufficiently strong to overcome my five big areas of challenge? I would advise going through my challenges one by one in front of your boards of directors.

Alternatively, you could follow the crowd and merely tell your board with hardly any further elaboration, “We are in the middle of synchronised global economic recovery which will carry on for the rest of this year”. This approach would place your career and the profitability of your company and at unacceptably high risk.