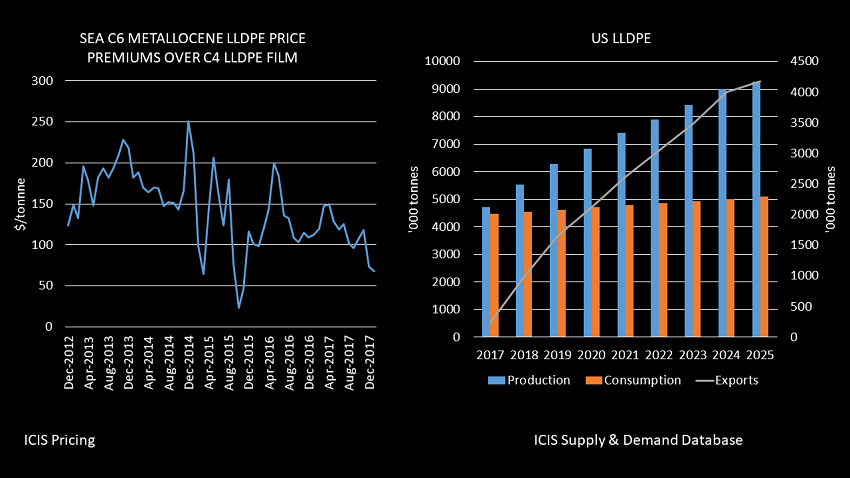 THE ABOVE chart could be a sign of a long term trend where we see metallocene linear-low density polyethylene (LLDPE) price premiums over standard, or C4 grade, LLDPE film at lower levels.

We have already seen C6 metallocene premiums in Southeast Asia slip ever so slightly to an average of $113/tonne from January 2017 until January of this year. This compares with $151/tonne from December 2012 (when we launched our SEA C6 pricing assessment) until December 2016 (see the above chart on the left).

The January 2017-January 2018 average was skewed downwards by premiums of just $74/tonne in December last year and $68/tonne in January 2019, both of which represented new lows since we began our metallocene price quote. This suggests that new supply (see the details below) may be eroding premiums.

(Note that in China, we only very recently launched C6 and C8 LLDPE metallocene prices assessments. In SEA, also, our C8 assessment is very new and so it is impossible to discern a sensible trend. Hence, the above chart shows just 6 metallocene in SEA versus C4 LLDPE film).

Might metallocene LLDPE be heading the way of so many other speciality and semi-speciality chemicals and polymers that have become commoditised through too much competition? I think the answer is very probably yes.

The problem is of course the large volumes of new C6 and C8 metallocene LLDPE capacity that has been brought on-stream.

In South Korea, SK Global operates two plants which have been commissioned over the last few years – one operated solely by SK  and another as a joint venture with SABIC.

ExxonMobil Chemical has big capacities in Singapore, the biggest in Asia, and PTT Global Chemical is in the process of bringing on-stream a new facility in Thailand.

The biggest threat is represented by new US capacities. The second chart on the right shows the rise in US LLDPE production in general from 2017-2025. Much of this additional output will be in metallocene grades.

A major problem for the US industry, as it tries to maintain value in metallocene, might be sufficient access to the China market.

As I’ve discussed before, only China has the scale of deficits big enough to comfortably absorb the additional PE across all the different grades that will be produced over the next seven years.

Last year only around 5% of China’s total PE exports came from the US, with the big jump in its 2017 imports primarily met by fellow Belt and Road Initiative members, including producers in the Middle East and SEA.

What if the US fails to make bigger inroads in the China market in LLDPE metallocene grades? The pressure would then build to find homes for this material in other smaller deficit regions such as Europe and SEA. This could add to downward pressure on premiums over standard grade LLDPE.

Rumbling away in the background during the last year has been the threat to US-China trade relations represented by the President Trump White House.

A breakdown in the trading relationship, even if this falls short of a full-scale trade war, could make it harder for the US to export PE of all grades to China.

This issue edged closer to the foreground over the weekend following recommendations by the US Commerce Department that the US should impose steel and aluminium import tariffs or quotas on imports from a number of countries including China. President Trump is due to make a decision on the recommendations in April.

There is also the effect on metallocene premiums of what happens to the global economy. The underlying economic fundamentals are a lot weaker than many people think. We could thus very easily see the end of talk of a coordinated global economic recovery.

In a lower growth environment, demand growth for PE as a whole would slow down. Affordability would become a bigger issue as plastic converters and retailers sought cost savings. Metallocene grades might only be bought if they commanded lower premiums over standard grade LLDPE.

None of this may happen, of course. We might instead see metallocene premiums hold up very well. But, as always, these thoughts are designed to help with your scenario planning, whether you are a producer or a buyer of PE.