Being an “early adopter” is never easy because of cynicism and scepticism. But what choice do we polymer companies have? None, if they really want to protect their revenues. 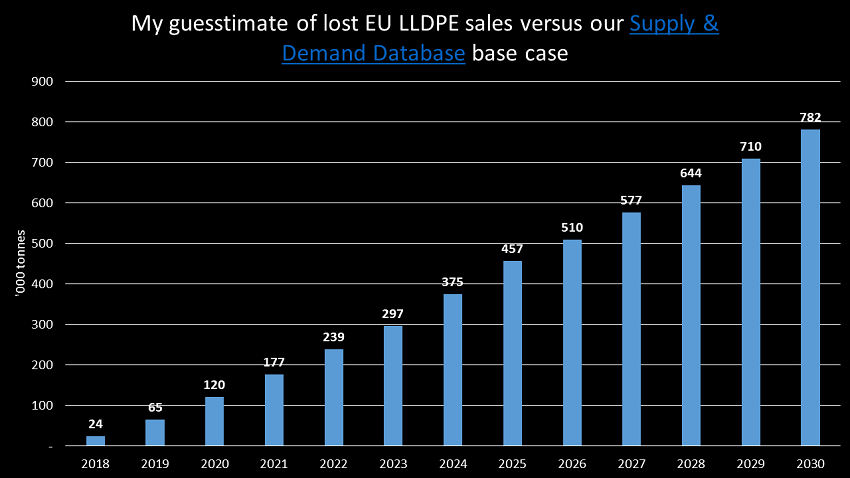 POLYMER companies will lose billions of euros and dollars in revenue unless they react in the right way to the global plastics waste crisis.

Here is a question: “Will it be socially acceptable in five years’ time to walk out of a supermarket with a shopping trolley full of crisps, sweets and other luxuries wrapped in multi-layer packaging?” Perhaps not. The excessive use of plastics packaging might go the same way as smoking in many social circles.

Or the supermarkets might make it impossible to walk out of a supermarket, certainly in Europe at least, with a shopping trolley packed with sweets and crisps etc. in multi-layer packaging that cannot for technical and economic reasons be recycled.

There is a big commercial incentive for retailers to focus downstream, on what their customers want, and the customers are telling the retailers that they want to consume less plastics. Plastic free aisles in supermarkets could thus be introduced that trial and prove the effectiveness of cardboard, glass and aluminium as alternative packaging materials.

It will be a combination of both, of course. Customers will vote with their wallets as retailers strive to keep wallets open by making innovations in packaging that fit with customer needs.

Let us take this a step further. You can make a very strong case that multi-layer packaging is essential for the essentials of life – e.g. milk, meat and vegetables. The packaging keeps food fresher for longer and thus greatly contributes to global food security.

But what if the pressure against what is seen as excessive packaging builds in this area too? In some markets we might see more local food supply chains where local farmers deliver to local stores, thereby bypassing the need for multi-layer packaging. This would be popular as it would boost local jobs.

So, how much potential loss of polymer sales are we talking about? Last month, I provided an estimate of how linear low-density polyethylene (LLDPE) consumption in the EU 28 countries could be affected as a result of the new EU Plastics Strategy.

I have crunched the data a little further to produce the above charts, with the methodology behind the numbers as follows:

“Total nonsense” might be your reaction. This might indeed turn out to be right as this is only a rough guesstimate. There will be far more superior ways of forecasting the impact, some using artificial intelligence that will soon put manual data crunchers out of a job.

But that’s not the point behind my numbers. The point is to get the debate going now before it is too late for the polymers industry.

Polymer companies face the difficulty that great money is still being made from the established business model.

This model is based on only looking upstream to feedstock advantage. Since the early 2000’s this has worked extremely well in the Middle East. The US is now following in the footsteps of the Middle East in the hope of similar success.

The model involves taking distressed, or stranded, ethane and turning it into petrochemicals and polymers for export to the rest of the world. Demand has since the early 2000’s been a secondary consideration.

The potential loss of end-use markets because of bans on plastic packaging is one of several threats to this existing model.

Polymer companies must respond to the plastic waste crisis by switching their focus away from just the upstream to the downstream as well.

Research money should be spent on investigating the type of new polymer manufacturing chains that I described last Friday. These are small integrated sites, probably near landfills, that would burn plastic waste for energy, turn plastic waste into fuels and possibly naphtha, and recycle waste plastic back into finished goods.

Making use of plastic waste for energy, fuels and naphtha production could save end-use applications from being banned, such as multi-layer film packaging and disposable coffee cups. If recycling multi-layer packaging etc. remains unviable this won’t matter to the public and the legislators as the waste plastic could instead by burnt for energy or broken down into fuels and naphtha.

Equally important will be techno-commercial teams that work with plastics processors and the retailers to redesign packaging to make it more recyclable. Otherwise, plastics will be replaced by other materials such as cardboard, glass and aluminium. Cardboard, glass and aluminium producers may already be working with the retailers to replace plastics.