China Shadow Lending Down By 70% With Deleveraging To Continue 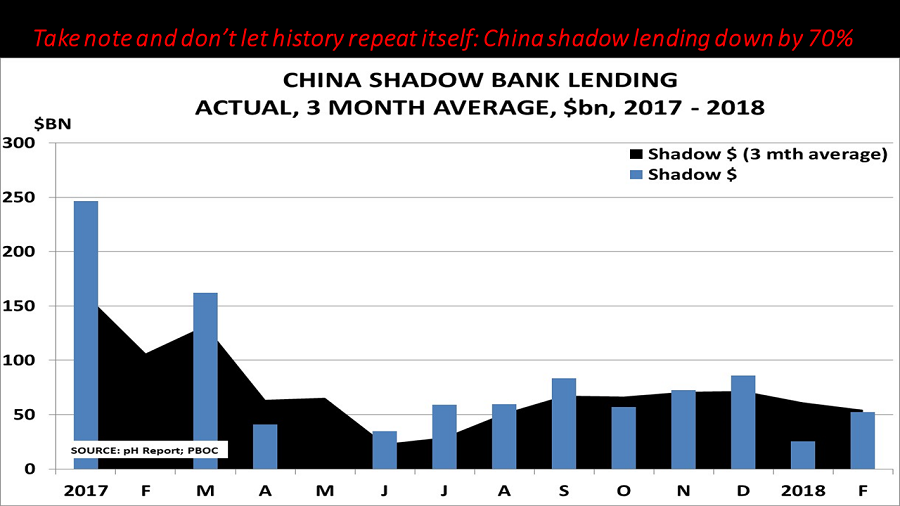 The ABOVE CHART shows that lending via China’s shadow banking system fell by no less than 70% in January-February 2018 over the same period last year. This follows the 90% year-on-year fall in January 2018.

The latest data underline the key conclusion that lending via the highly speculative shadow lending system is now back to where it was in January 2009, before China launched its huge economic stimulus package. Most of the speculative froth that had been been added to GDP growth has disappeared in a very short space of time.

You then need to paint into the picture the government’s determination to press ahead with its environmental clean-up campaign, even if this means lower economic growth in the short term. Now you have the full context behind the government’s announcement that the official target for 2018 GDP growth is 6.5%. This would compare with last year’s actual growth of 6.9%.

Growth of 6.5% would still be very strong by the standard of many other countries and regions. BUT, a four percentage point reduction in China’s GDP growth would still be very significant in the global context. Even moderately lower growth in China might be enough to bring to an end the false notion of a sustained global economic recovery that dominates financial and commodity markets.

There is a risk that China loses control of events because of the alarming size of its bad debts relative to its GDP. My base case is that there will be no debt crisis. I also believe that there will be no turning back on deleveraging in 2018 and beyond, even if GDP and other growth data undershoot government targets. Here is why:

History could be about to repeat itself

What continues to worry me is that most commentators are not picking up on what China’s 2018 shadow lending data is telling us.

There is a historical precedent here. In January 2014, just about everyone overlooked the deleveraging that had begun to take place. This was clear from the freely available monthly lending data published by the People’s Bank of China, which is still available for free today.

But it wasn’t until September of that year that petrochemicals and other companies recognised that a significant slowdown was underway in China. What brought about the recognition was the collapse in oil and other commodity prices that was partly the result of the slowdown.

Petrochemicals feedstock purchasing managers will have painful memories of being on the wrong side of the oil price collapse. They might still be consoling themselves with the often repeated phrase, “nobody saw this coming”. All of us, though, could have seen this coming through tracking and  correctly interpreting China’s lending data. Don’t make the same mistake again.