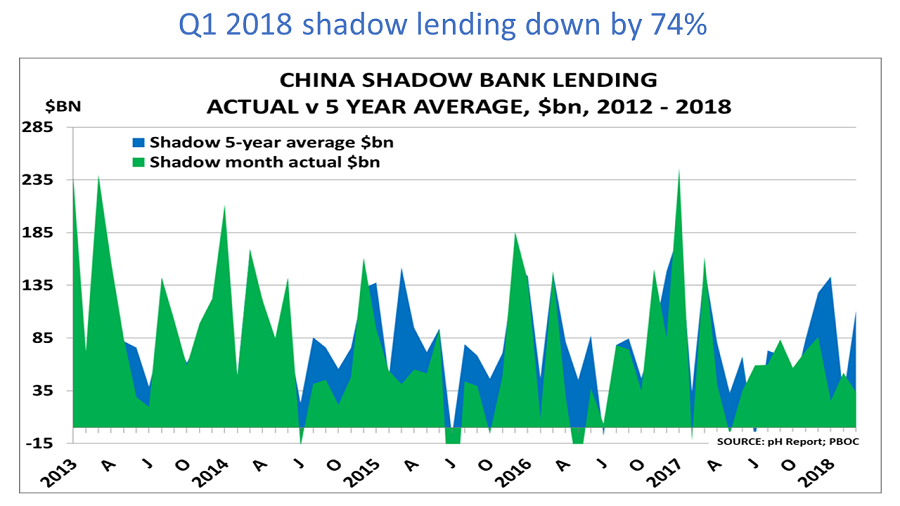 THE above chart should give you a feeling of déjà vu. In early 2014, Chinese lending growth started to decline and by September of that year, broad recognition of the extent of the decline was behind a sharp retreat in global commodities prices as the global economy also slowed.

History very often doesn’t exactly repeat itself. Today, for example, a strong argument can be made that strong service sector growth, largely via booming mobile internet sales, will cushion the impact of China’s latest attempt to deleverage its economy.

Nevertheless, the above chart is quite extraordinary in what it is telling us. A 74% decline in shadow banking lending in Q1 2018 over the first quarter of last year takes highly speculative and so very risky lending back to where it was in January 2009.

That month is significant because it was before China’s giant economic stimulus package kicked in. The extra boost that was added to the economy via speculative finance has as a result been almost entirely removed.

Further, the chart shows a 20% fall in total social financing in Q1. This is lending via both the shadow banks and the more prudent state-owned banks. This tells us that the availability of credit has declined across the economy as a whole, not just in areas of red hot speculation.

Petchems markets as a barometer

The great thing about petrochemicals and polymers markets is that they act as an excellent early indicator of macroeconomic trends.

Yesterday saw the release of the official GDP growth number for Q1, which at 6.8% can hardly be described as a slowdown. But on the ground evidence from PE markets is telling us something different:

And as Julian Evans-Pritchard of Capital Economics told CNN: Official growth [Chinese] figures need to be taken with a grain of salt as they have been implausibly stable in recent years. The research company’s China Activity Proxy estimates that growth in real economic growth in China was just 4.8% in Q1.

It is not just lower credit growth that points to a deceleration of Chinese economic growth. So does the ongoing environmental clean-up that has led to a fall in industrial production.

I had expected some kind of pick-up in PE markets in March when the winter clean-air campaign ended. This was the campaign in 28 northern cities to improve air quality during the winter months. But the pick-up didn’t occur, with the story was similar across other petrochemicals and polymers

The reason is that China is doubling down on its pollution campaign. Inspectors from the all-powerful Ministry of Ecology and Environment have stepped up the number and severity of inspections of manufacturing plants, with tougher new air pollution standard also introduced. A new environmental tax was also introduced in January.

Many more closures have already taken place this year of factories that fall short of air and water pollution standards. Some of these closures are permanent as the environmental campaign is taking place in parallel with restructuring of factories with poor economies of scale and heavy debt that operate in oversupplied manufacturing sectors.

But if global conditions remain favourable then China’s GDP growth will only mildly decelerate during the rest of this year and into 2019. As I said, China now has the cushion of a much stronger services sector than in 2014.

And the good news specific to PE and other polymer markets are the new restrictions on imports of heavily contaminated scrap plastic. As I discussed on Monday, the restrictions could boost 2018 PE consumption by 2% above our base case for this year.

There is now, though, in my opinion more than a 50% chance that China will end up in a global trade war with the US.

Last week I discussed how China could well be in a position to walk away from compromise negotiations with the US, as it doesn’t need any further access to US intellectual property rights. A dispute over intellectual property is at the core of the tit-for-tat exchange in tariff threats by the US and China.

Even if China does need continued access to US intellectual property, there is another scenario where it still walks away from the discussions without a deal.

This would happen if its politicians are asked to make compromises they view as economically and politically unfeasible. Is today’s White House administration ready to make the concessions that allow China to emerge from the talks looking like a winner? In my opinion, the answer to this question is a resounding “No”.

In the event of a US-China trade war then of course Chinese GDP would suffer a sharp decline rather than a moderate slowdown. And more broadly, we would see a global recession.

Here is something else you also need to take note of: The risk of a recession in Germany, Europe’s export powerhouse, is now at its highest level since immediately ahead of the Global Financial Crisis, according to the Düsseldorf-based Macroeconomic Policy Institute (IMK).

As the UK’s Daily Telegraph writes:

The IMK said a confluence of US-China trade jitters, a decline in German industrial output, and a 7% fall in the DAX index of equities since mid-January – led by bank stocks – were all feeding off each other.

Germany is major exporter of machine tools to China. The increased risk of a recession could therefore also reflect a decline in real, underlying economic activity in China.

Further, as the Daily Telegraph also writes, JP Morgan’s instant “Nowcast” tracker of eurozone growth in the first quarter has dropped to 1.5%, half the torrid pace of late 2017.

Impact on PE growth and margins

The most direct risk to PE markets of a trade war is that China would follow through on its threat of 25% import tariffs on US LDPE and LLDPE. This would make it economically unviable for the US to export commodity grades to China

The displaced volumes would have to compete for space in European and Southeast Asian markets – two other major import regions. This would happen as the US undergoes its biggest-ever expansion in capacity.

The consensus view is that the dip in global PE margins from the new US capacity will be very modest and very short-lived. But the above scenario suggests that the consensus is at a significant risk of being wrong – more than 50%.