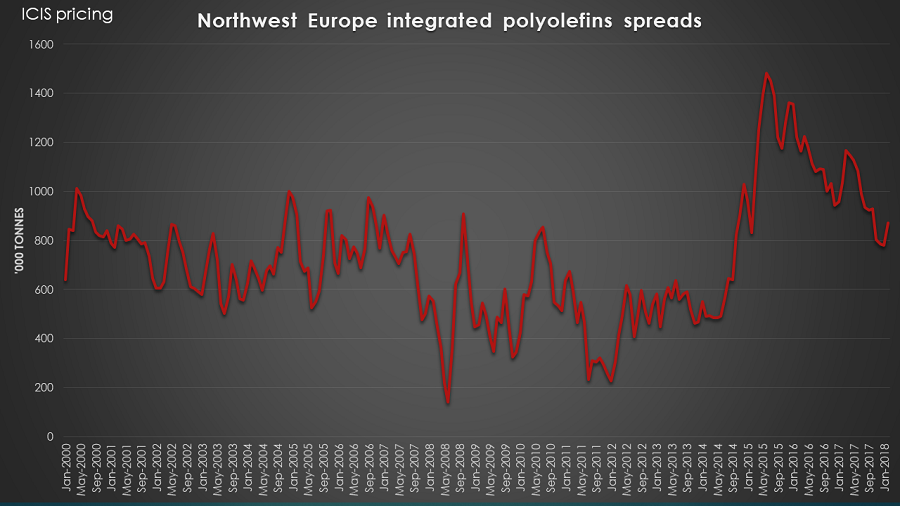 This will be one the themes of my training session in Vienna on 24 April – An Introduction to European Polyolefins: Industry Fundamentals And Market Dynamics.

Click here to register for the course, and see below for a summary of some of my discussion points on Europe. The course will also cover US, China and other key regions.

What Has Worked Very Well So Far

The above chart is another example of the tremendous value of our historic ICIS pricing data. For the methodology behind the chart see Monday’s post on Asian integrated polyolefins margins.

Northwest Europe integrated spreads can be broken down into four historic phases:

Talk of the need to shut European capacity was obviously wrong as cyclical factors by themselves have provided very strong returns since mid-2014.

The above chart also underestimates the returns of many cracker operators, as the numbers behind the chart are based on assuming that a cracker player buys naphtha at spot market prices.

Naphtha may instead be supplied by an associated refinery. Or naphtha may not be cracked at all as a result of investments that have taken place to crack imported ethane, propane and butane.

Investments have also taken place to crack cheap refinery feedstocks such a heavy fractions from the bottom of distillation columns. These have lower alternative-market values than naphtha.

A lot of work has been done to in effect rebuild old crackers from scratch, furnace by furnace. This challenges the generalisation that European crackers are old and therefore inefficient.

Rebuilding crackers has improved economies of scale through capacity creep. The rebuilding work has also involved improvements in energy efficiency as new technologies have been installed to better capture and transfer heat.

What Will Work In The Future

The most immediate challenge is how Europe copes with new US PE imports. So far, very few imports have arrived from the new Gulf Coast plants with Q3 of this year expected to see a big pick-up in arrivals.

Another big issue beyond the control of the European poylolefins industry is quite obviously the global economy. I believe that either this year or next, a global recession is inevitable. European producers should prepare for a recession that could be longer lasting and deeper than many people assume.

One response to these external factors should be to do more of the same – i.e. focus on even greater cost efficiencies in feedstocks and in running plants.

The next wave of plant efficiencies could well come from digitisation. The combination of smart sensors and artificial intelligence could make unexpected shutdowns largely a thing of the past.

European polyolefins players need to in parallel look downstream as they confront the implications of the new EU Plastics Strategy. The strategy stipulates that all plastic packaging must be recyclable by 2030.

Some companies may assume that the alarm over the 8m tonnes of plastic rubbish we are dumping in the world’s oceans every year will fade away.

I don’t think so. I believe that public opinion has permanently shifted, which will result in more and more legislation. As my colleague Caroline Murray writes in this ICIS Insight article:

It appears that consumer plastics regulation may be reaching a tipping point, prompted by public health concerns and the materials piling up in Europe and North America since China’s crackdown on imports of recycled waste.

As I said, the focus needs to be downstream, as well as upstream, through working with plastic processors and retailers to make PE and polypropylene more recyclable.

Coming to terms with the legislative threat is also in line with the traditional upstream-only approach, as plastic waste can into a new feedstock source that will have a negative cost.

Plastic rubbish can then be converted into fuels, naphtha and chemicals in pyrolysis and gasification units.

What is the scale of the legislative threat? The Ellen MacArthur Foundation, in a 2015 study, wrote:

Imagine the effect on profitability if governments start charging for the cost of these externalities.