Plastic Rubbish Crisis: No More Business As Usual For Polymers 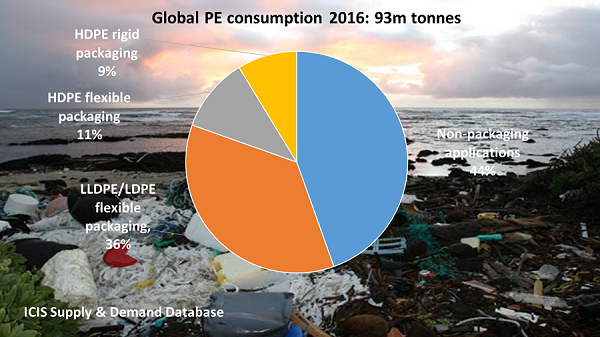 DO NOT underestimate the ability of public opinion to reshape markets. That’s my first warning to any polymers industry executive out there who thinks future success will come from a business as usual approach.

Public anger at the environmental damage being caused by today’s approach to disposing of single-use plastics is going to grow and grow. And the anger won’t necessarily be based on 100% sound science. Take as a good historic example the public reaction to bisphenol-A in baby’s milk bottles and the resulting dent in polycarbonate demand.

The Economist recently ran what was no doubt a well- researched article on plastics and the environment and concluded that when measured against synthetic fertilisers, the proven damage from plastics was a lot less. There are two important points here, though:

Legislators in many countries are voted into office by the public. Even where the public doesn’t have the vote, lawmakers have to listen to public opinion for the sake of their career progression. A great example of this is in China where the biggest environmental clean-up the world has ever seen is at the very top of the political agenda.

Polymer companies that sit back and fail to engage with the legislators can have no complaints if the laws that are introduced don’t make practical sense. Engagement in the debate with lawmakers, as well as with the public, is an essential investment of time and resources. Shareholders and other stakeholders should monitor companies to make sure this investment is taking place.

My second warning is therefore this: Do not underestimate the ability of legislation to reshape markets.

James Carville, campaign manager for Bill Clinton during his successful 1992 presidential campaign, was the source of the famous catchphrase, “It’s the economy, stupid”. Business leaders often adapt this to the more polite “follow the money” as a means of focusing their employees on what really matters.

For petrochemicals and polymers, following the money has always been about cheap feedstocks. Recently, it’s been all about the US in this regard as a result of the stellar margins resulting from the shale gas revolution.

Now, though, polymer companies have to worry about demand destruction in a way that they would have never imagined only two years ago. Such has been the change in public opinion about single-use plastics and the direction of legislation.

But the future will also still be partly about feedstocks. What concerns me is that nearly all of the debate in the polymers business about the environmental issue centres on a.) The undoubted fact that some single-use plastics produce more good than bad – e.g. multi-layer packaging for food, and b.)  Multi-layer packaging, whether in good or bad end-use applications, is technically impossible to recycle.

This is all true, of course. But adapt Carville’s phrase to “It’s still the feedstocks, stupid” and herein lies the solution:

This will result in the relocation of feedstock advantage. Moving vast amounts of virgin polyethylene (PE) from the US to the rest of the world will, for example, become much less viable as other regions move towards greater self-sufficiency.

It is important to focus on PE because it is in PE where we are seeing most of the new US investment. Confidence about polymers markets in general is also being driven by the notion that all of this new US PE supply will very easily absorbed by the global economy.

PE is also one of the polymers affected most by the single-use plastics issue, as the above chart illustrates. Breaking the data down, our ICIS Supply & Demand Database shows that of approximately 93m tonnes of PE consumed globally in 2016, 44% or around 41m tonnes went into non-packaging applications.

Europe is an interesting case study here. As I discussed last week, force majeures and failure to invest in new conventional polyethylene (PE) and polypropylene (PP) capacity led to exceptionally tight supply in 2016.  PE production fell by 2.3% compared with the previous year as demand grew by 1.7%. In PP, production was down by 0.3% as demand rose by 3.5%.

Building enough new conventional capacity in Europe may well prove impossible because of lack of conventional feedstock advantage. But why not the incremental addition of land-fill based pyrolysis and gasification units?

Remember that you will probably not have any choice here if you want to protect demand. If you don’t invest in this way then European demand for single-use plastics could disappear for because of the failure to meet with the requirements of the new EU Plastics Strategy.

The strategy requires that all plastic packing must be recyclable by 2030. It doesn’t surely matter how this is achieved. If recycling back into finished products remains in many cases technically impossible, then converting plastic waste to feedstocks seems an obvious solution.

In China, too, which has to import most of it oil and gas, plastic rubbish will very probably end up as an important new source of local feedstocks. With major government investment in local-for-local recycling, who knows what might be achieved?

There is a lot of talk about long term tight global polymers markets. Lack of investment is said to be combining with a sound global economy. Putting the issue of the global economy aside – which  I believe is far from sound – this view fails to consider how demand could literally fall off a cliff as environmental pressures build.

That’s unless, as I have just argued, polymer companies protect their demand by achieving much greater levels of recyclability.