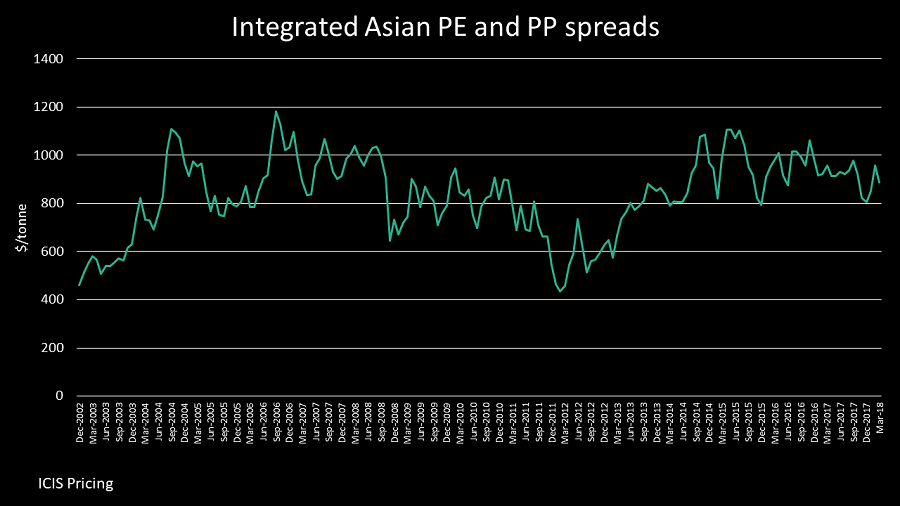 ANOTHER week has led to another fall in Asian polyethylene (PE) and polypropylene (PP) prices despite higher naphtha feedstock costs on stronger crude oil.

Pricing has been weak since the Lunar New Year Holidays, (15-21 February). Market participants had expected the opposite on a recovery in demand following the holidays and tight supply resulting from the peak of this year’s Asian cracker turnaround season. This also supposed to be a peak season in China for PE demand.

Nobody will be pushing the panic button yet as in historic terms. The above chart indicates that integrated spreads between PE and PP and naphtha costs remain very good (see the note at the end of this blog post on methodology):

But be warned. As I discussed last Monday, we may already be in the midst of a global synchronised economic downturn with PE and PP markets providing an excellent barometer of wider macroeconomic conditions.

An equally good barometer is also of course freight movements. The FT Confidential China Freight Index fell to its lowest level in March since February-March 2016, when fears of a Chinese economic hard landing was roiling global stock markets.

This latest dip in the freight index is attributed to one of the factors that I have also singled out as indicating a gradual cooling off in the Chinese economy: Lower credit growth.

The March official China Purchasing Managers’ Index did, however, rise to 51.5 in March from 50.3 in February – a stronger recovery than most analysts had expected.

But I suspect this is the result of the end of the winter clean air campaign in 28 northern cities. Industrial activity was always going to pick up as the campaign ended, before a further intensification of China’s environmental clean-up kicks in later this year.

Plus, there are the global factors to consider. The risk of a global trade war is still weighing on global equities as is the weakness of FAANG shares on data security concerns.

Asian PE and PP markets may bounce back, leading to a recovery in spreads that dipped marginally from $958/tonne in February to $887/tonne in March.

But it is only a question of time before we face a severe new global recession because of fundamental, underlying weaknesses in the global economy.

I am with Scott Minerd, global chief investment officer with Guggenheim Investment, when he says that the US companies will enter the next recession with the “biggest debt load in history”. This is down to the failed policies of the Fed and other Western central banks. This failure is being exposed as interest rates rise.

Minerd adds that US benchmark fund rates will rise to between 3.25-3.5% in two years from the current 1.5-1.75%.  He says: When the overnight rate gets to 3% the amount of free cash flow in corporate America will be reduced to a level which is consistent with what we have seen in prior recessions.

Please be very careful and very cautious out there.

Here’s an explanation of the data behind the above chart: