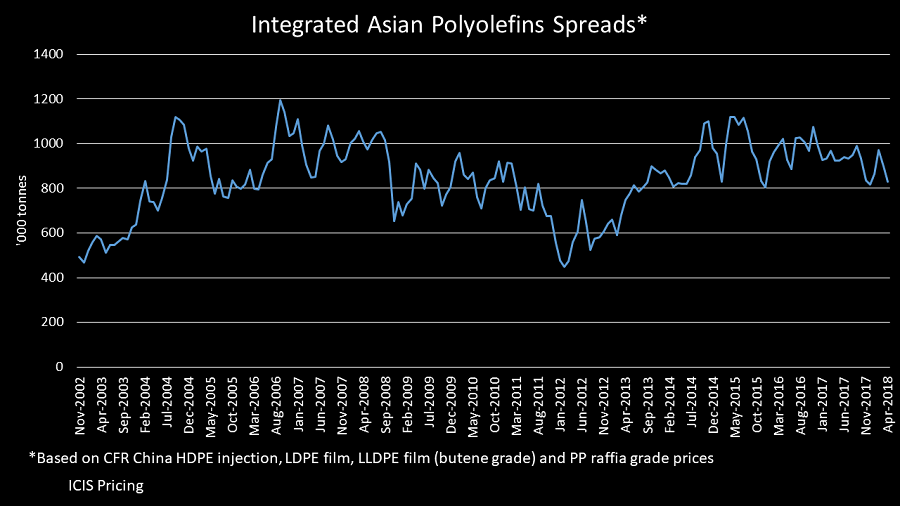 PETROCHEMICALS are a great barometer for economic growth as they are the raw materials for so many finished goods. So, if petrochemicals producers see their profits slip, this provides an early signal that something is wrong with wider economies.

It is not just petchems producers that should therefore take note of the chart at the beginning of this blog post, but manufacturers in general. The chart is an update from early April and further confirms that the Chinese economic slowdown is well under way.

From November 2017 until April 2018, Asian integrated polyolefins spreads (*see footnote below for my methodology) declined to an average of $869/tonne from the golden era of $978/tonne in August 2014 until October 2017. The golden era was the result of low oil prices, tight global polyolefins markets and a healthy global economy in 2017.

Spreads are still a long way from their low point since at least November 20o2, when our CFR China price assessments began, of $574/tonne. This was in the calendar year 2012. But the recent decline has occurred before big new US polyethylene (PE) volumes start arriving in in Asia from the second half of this year.

Spreads do not of course take into account production costs and so they do not represent margins, but they offer a reasonable approximation of margins or profitability. For example, integrated high-density PE (HDPE) naphtha-based variable cost margins averaged $475/tonne in 2018 up until 4 May, according to the ICIS PE Weekly Margin Report. This was down from $597/tonne for the full-year 2017, but was a long way from 2012’s $97/tonne.

The fall in spreads has also occurred despite what is normally a post-Lunar New Year peak demand season in China. But the peak demand season hasn’t happened because of a 74% Q1 decline in China’s shadow bank lending and a 20% fall in total social financing as China pursues one its top objectives for 2018 – deleveraging.

Another factor behind the fall in spreads is obviously the surge in oil prices and naphtha feedstock costs. But if demand was strong enough, cracker-to-polyolefins operators would have been more successful in passing on their higher raw materials costs.

A US-China trade war seems highly likely, with trade tensions between the US and its other trading partners set to increase as a result of President Trump’s decision to pull out of the Iran nuclear deal.

The Iran nuclear decision has also raised the possibility of the crude price rally continuing all the way to $100/bbl. In March 2016, I presented these three Scenarios for oil prices, with Scenario 3 now looking a strong possibility for  either later this year or 2019:

Short-term inflationary pressures are likely to build across the global economy because of expensive oil. This will add to the rise in interest rates as central banks withdraw economic stimulus. The Fed is convinced that all is good with the US economy, which means another US rate rise is likely in June. China looks set to continue to withdraw stimulus as it tries to deal with its bad debt issues.

“The February PMI reading was consistent with global GDP rising at an annual rate of 3.0%. However, the March reading is indicative of just 2.5% annualised growth,” writes Market Oracle.

“Therefore, not only is global growth already in the process of slowing but the insidious bursting of the bond bubble is gaining momentum and should soon push the economy into a worldwide synchronized recession,” the article added.

The No1 issue for me remains debt, with debt repayments a major problem under Scenario 1 of $25/bbl crude and Scenario 2 of $100 crude. Under Scenario 1, deflation would have been the issue. We instead now have the risk of an inflationary spiral and higher interest rates.

Meanwhile, the same Market Oracle report reminds of us of the scale of the global debt challenge when it writes that the Institute of International Finance placed global debt at $237 trillion as of September 30, 2017. This would be equivalent to 318% of global GDP, with more than 40% of new borrowing since 2009 issued by China.

I hope I am wrong, as always, but it is best to prepare for more difficult times ahead. Specifically for the Asian polyolefins business, this could mean cracker-to-polyolefins profitability testing its 2012 level.

*Methodology: When your produce a tonne of ethylene from naphtha you also make around 0.5 tonnes of propylene plus co-products including aromatics and C4 olefins. I assumed that this one tonne of ethylene was used to make 0.33 tonne each of HDPE, low density PE, low-density PE and 0.5 tonnes of  polypropylene (PP). PE and PP values were calculated by multiplying PE and PP prices by 0.33 and 0.5 respectively. Co-product values were estimated at 1.8m times the prices of naphtha per tonne. Total values were then subtracted from the costs of making tonnes of ethylene, which were calculated at 3.3 times the prices per tonne of naphtha.