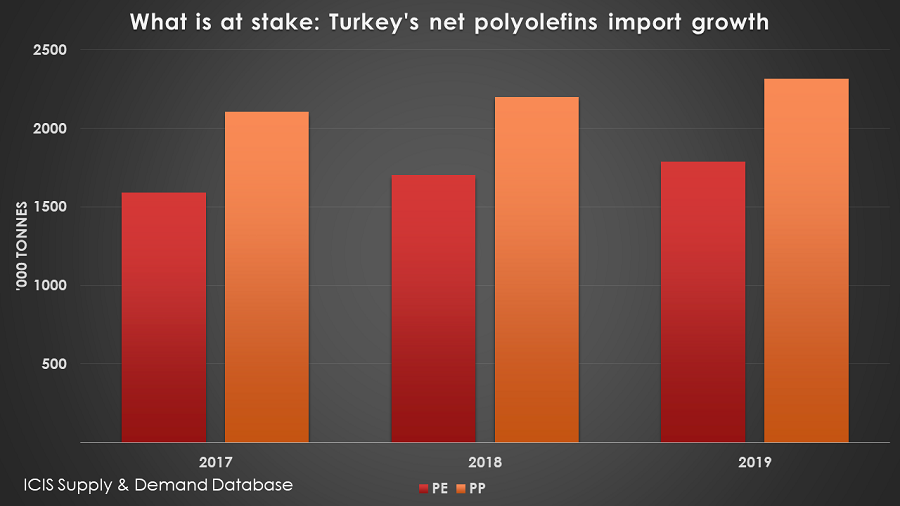 THE first ramification of the Turkey crisis is that the collapse of the lira raises questions over how Turkish importers will be able to afford the dollars to pay for some of the polyolefins imported since the crisis began.

Then comes the issue of what happens to Turkish polyethylene (PE) and polypropylene (PP) demand, and so imports, during the rest of this year.

Both of these issues are of major direct importance to exporters to Turkey. Leading exporters include Saudi Arabia, Iran, Egypt, Belgium, South Korea and Singapore.

The broader problem for the global polyolefins industry is what any collapse in demand in Turkish demand does to global supply and demand balances.

Turkey, because of lack of investment in local capacity, is a major importer and thus crucial for helping to absorb excess PE volumes. These excess volumes are of course the result of the big increases in US production.

And whilst the global PP market looks to be in much better shape this year, Turkey is a very big PP importer and so a pivotal consumer for several countries. Take Saudi Arabia as an example, which had a 31% share of Turkey’s total PP imports between January 2017 and May 2018. Saudi Arabia exported 947,673 tonnes to Turkey during this period.

The data behind the chart at the beginning of this blog post, from our ICIS Supply & Demand Database, gives our view on Turkey’s PE and PP net import growth (imports minus exports) between 2017 and 2019. These numbers were compiled before the crisis began.

Returning to the subject of crude, perhaps Turkey will be the trigger to push oil prices back to below $40/bbl. This would be good news for the major importers. But the far bigger negative could be the stress on the financial system as the quants and the hedge funds etc. unwind their long positions.

Do you remember Pets.com, which IPOd at the height of the 2001 the dot.com bubble and lost $300m of investors’ money because the business was all hype and no substance?

Gillian Tett, the excellent FT financial journalist, does. She compared Pets.com to an Argentinian bond issue in June, when she wrote:

The bigger reason why demand is so high is the action of central banks: quantitative easing has pumped so much liquidity into the markets that investors are frantically — desperately — chasing any investment that might produce a return

That 2117 Argentina bond may end up being the government bond market equivalent of the Pets.com IPO during the 2001 tech boom — the sign of a bubble peak. Investors should take note, in whatever language they choose

The point she was making was that because of a desperate search for yield by investors as a result of nearly a decade of quantitative easing and very low interest rates, money had poured into very risky assets.

How many Pets.coms might there be out there in the form of loans to emerging market companies and countries? We might be about to find because of the contagion effect of the crisis in Turkey. Or the proverbial can may be kicked further down the road if the Turkish crisis eases.

The problem is, as I said, is this search for yield. William White, formerly of the Bank for International Settlements, has long warned about the risks of rising emerging market debt. For example, in early 2016, he wrote:

Debts have continued to build up over the last eight years and they have reached such levels in every part of the world that they have become a potent cause for mischief.  Emerging markets were part of the solution after the Lehman crisis.  Now they are part of the problem, too.

It will become obvious in the next recession that many of these debts will never be serviced or repaid, and this will be uncomfortable for a lot of people who think they own assets that are worth something.  The only question is whether we are able to look reality in the eye and face what is coming in an orderly fashion, or whether it will be disorderly.

William White is worth taking note of because he is one of the few central bankers who predicted the sub-prime crisis.

PREVIOUS POST China tariffs: Quantifying The Impact On US Petchems And Energy
NEXT POST US PE Exports: Impact Of China Tariffs On Smaller Markets