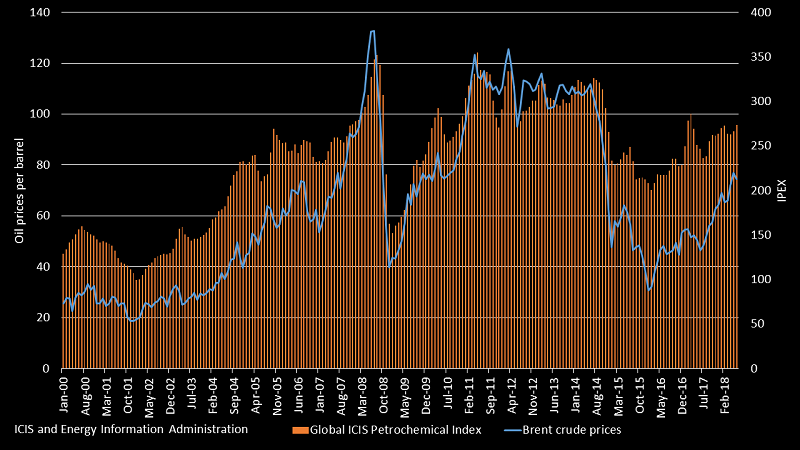 ALL the excitement over the positive impact of US tax cuts should be placed very firmly in this context from an early July Reuters article:

US budget analysts generally look at the impact of tax changes over a ten-year period. The tax cuts approved at the end of 2017 were estimated to reduce individual income taxes by a little more than $1.1 trillion over ten years.  By comparison, the rise in oil prices since the start of 2016 is the equivalent of a tax increase of almost $1.6 trillion over the next decade.

This explains why President Trump was in early July pressuring Saudi Arabia to raise oil production. The same thinking might also be behind his announcement this week that he is open to talks with Iran. US withdrawal from the Iranian nuclear deal and the prospect that new sanctions will block Iranian oil sales have driven crude prices higher.

Another reason for strong oil remains the huge size of the long bets that the quants, commodity funds and high-frequency traders are making in crude futures markets, as Paul Hodges writes in his latest PH report. As of April, these bets were a staggering 15 times physical demand. Long positions were cut in the week to July 17 by their biggest amount in a year, but this was seen as profit taking rather than deep-seated bearishness over the market.

Upending the geopolitical order in the Middle East is always a risky proposition. What has added to the risks over the last few years is that Saudi Arabia and Iran seem to have intensified their long struggle for regional influence. Events in Syria compound the complexity, as does Israeli-Palestinian tensions.

President Trump is in danger of pushing Iran into a geopolitical and economic corner if his offer of talks doesn’t lead to engagement that calms things down. So far, the signs are not good as Iran has rejected the offer of talks. The Strait of Hormuz carries 20% of the world’s oil supply. If conflict were to close the Strait down then crude prices would obviously skyrocket. Prices around $100 a barrel seem conceivable, with oil at such levels acting as a major tax on economic growth.

Now take a look at the June 2018 chart from the ICIS Petrochemical Index (IPEX) service, at the beginning of this blog post.  The IPEX is a capacity-weighted measure of the movement of petrochemicals and polymer prices since January 1993. As you can see, whilst the index has yet to fall below crude, as was the case in in 2011-2014, the spread is narrowing. Petrochemicals are a bellwether for the global economy. So why hasn’t the pass-through of higher crude costs been stronger, given that the the consensus view is that the global economy is fine? Here are three of the reasons why:

Yesterday’s release of the official China purchasing managers’ manufacturing index for July confirms the impact of these three factors. The index was at a 14-month low.

This makes Asian petrochemicals producers especially vulnerable to a further run-up crude, if, as I believe will be the case, the slowdown in the Chinese economy continues. Xi Jinping is not going to change course. Recent financial easing measures only represent a mild finessing of the economy.

Add to this the arrival of big volumes of new US polyethylene (PE) in Asia from H2 of this year onwards and the pressure could build on this region’s petchems players. I maintain that if the US-China trade war accelerates, there is a good chance that most grades of US PE will be subject to heavy Chinese import tariffs. This would force the US to target other much smaller export markets such as Southeast Asia. 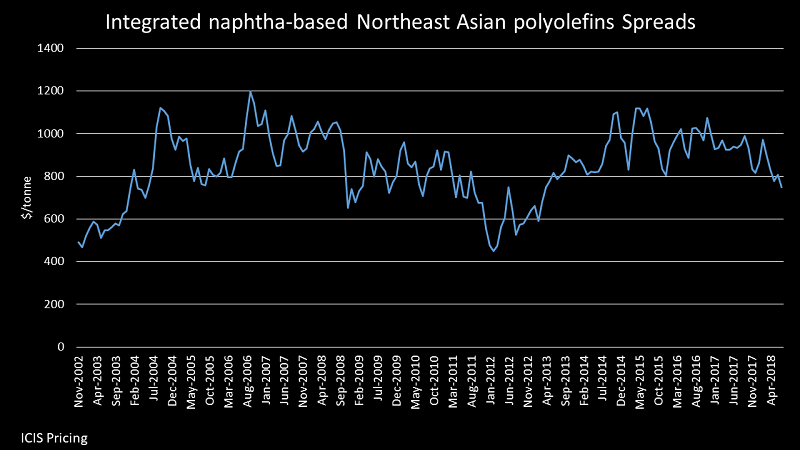 My latest measure of integrated Northeast Asian naphtha-based polyolefins spreads is showing signs of the strain of higher crude prices in a weaker demand environment. July spreads were at $748/tonne, their lowest level since March 2013.

Granted, the January-July 2018 average spread is still historically strong at $842, and this is a long way from the low point so far since 2000. That low point was the full-year 2012 when spreads averaged $574/tonne. But the trend-line should be of concern to Asian petchems players.

Scenario 2: Crude falls to below $40 as global economy weakens

The role of true price discovery in crude markets has for years been severely undermined by reduced regulations and a flood of liquidity from central banks.

I discussed these important changes in oil and other commodities markets in Chapter 3 of Boom, Gloom & The New Normal. A significant regulatory shift occurred in 2001. Then came the flood of easy money following the 2008 Global Economic Crisis, as central banks cut interest rates to record lows and launched quantitative easing programmes on a scale never seen before.

This flood of cheap liquidity has greatly increased the role of financial players in setting prices, to the point where the veracity of data behind any story matters much less than the huge volumes of money backing that story.

Right now, the story is basically this: “All is good with the global economy and oil supply is fundamentally tight and it will tighten even further”.

But as central banks raise interest rates and cut back on QE (most importantly China’s central bank), the cheap money that has facilitated today’s record level of long crude positions may disappear. Long positions could rapidly unwind.

As for the real long-term story of crude demand, it is one of declining demand growth on sustainability and demographic issues.

Meanwhile, a sudden collapse in oil prices may occur in an environment of weaker economic growth. US growth could have peaked in Q2 because of one-off factors. As interest rates rise and as the dollar strengthens, the withdrawal of funds from emerging market may turn into a flood, threatening the $2.5 trillion of emerging market debt that needs to be serviced by the end of 2019. A stronger dollar would also exert further downward pressure on crude.

All of the above may occur as a full-blown global trade war develops, and as China’s moderate economic slowdown becomes a sharp slowdown.

Scenario 2 – The Comfortable Middle:  Crude eases back to $50 a barrel as the global economy remains healthy

Our 2016 study, Demand: The New Direction for Profit, was built around these three scenarios for crude which remain valid today:

A “comfortable middle” outcome is still very possible and should be planned for. Perhaps trade war fears will recede as China’s growth only moderates very slightly. And maybe the underlying fundamentals of the key US economy really have turned around, with Q2 GDP growth representing signs of even better times to come.

But to bet your entire business on such an outcome would be an unreasonable risk to take for your employees, shareholders and other stakeholders. Scenarios 2 and 3 are clearly very possible and need to be planned for.

PREVIOUS POST China PP Imports To Halve By 2025 Or Turn Into Exports
NEXT POST Polyethylene: Damage From Trade War Should Not Be Underestimated