China tariffs: Quantifying The Impact On US Petchems And Energy 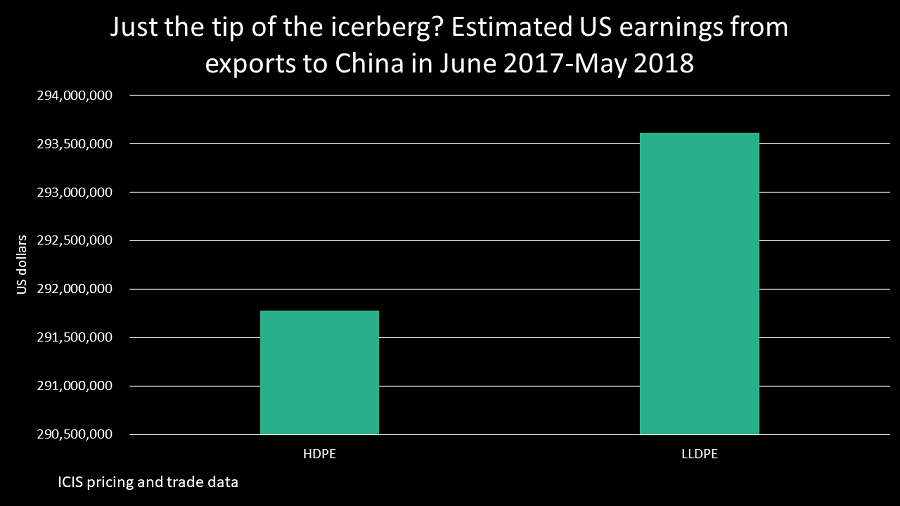 PRESIDENT Trump believes he is winning the trade war with China because of the much greater strength of US stock markets versus their Chinese counterparts. At the start of last week, for example, the two major Chinese indexes had lost a quarter of their value since the start of the year whereas the S&P 500 was nearing a fresh record high.

But what if China has instead achieved the upper hand in this battle because of its extremely skilful targeting of the biggest driver of the US economic recovery – energy and petrochemicals?

Twenty five percent tariffs on US crude and liquefied natural gas are set to deliver a very significant blow to the US economy.

China has also extended its range of 25% polyethylene (PE) import tariffs to cover all grades of US high-density PE (HDPE) and nearly all the grades of US linear-low density PE (LLDPE), just as US PE capacity is ramped up. This will badly undermine the earnings of the US companies that have built new plants.

A second wave of new US PE plants, where steel has yet to be placed in the ground, may also now be in jeopardy if the tariffs, which are due to be implemented from 23 August, stay in place for long enough.

US methanol imports will also face 25% tariffs from 23 August. This is at a time when the US methanol industry is undergoing its biggest-ever expansion, and when China is set to become by far the biggest methanol import market.

Each new methanol plant built in the US drives capital spending of $1.1 billion and an economic ripple effect worth $1.5 billion.

The potential for high import tariffs placed on US methanol by China could lead to a dramatic slowdown in the domestic methanol industry’s resurgence, at a cost of investment, jobs and tax revenue. At a time when the U.S. is poised to significantly expand methanol exports to China, the imposition of tariffs could have the perverse impact of halting this positive trade.

The immediate negative economic impact on the US energy and petrochemicals industry is very easy to quantify:

This gives you some ballpark numbers about the revenues immediately at stake for US PE producers over the next year if the tariffs stay in place for that long. Tariffs at 25% could make it economically unviable for Chinese buyers to acquire US HDPE and LLDPE cargoes.

But of course the scale of lost earnings will be much greater for US energy exports. Take LNG as an example. In this ICIS article, we wrote:

This, though, could be just the tip of the iceberg for the potential loss of US earning, investments and jobs.

The trade war may have already done enough to convince China that the US is no longer a reliable trading partner.

China could as a result devote much more economic and geopolitical energy to making its Belt and Road Initiative (BRI) work. The BRI may become the world’s biggest free trade zone and so largely energy and petrochemicals self-sufficient.

US companies may argue that this is far too alarmist (and, as, always, I very much hope I am proved to be wrong in raising these concerns). They could tell their shareholders that energy and petrochemicals volumes that cannot be exported to China will easily find a home elsewhere.

But the more I dig into the data and the more I subtract China’s extraordinary role in driving existing and future demand growth in markets as diverse as crude, LNG, PE and methanol, the more the numbers don’t seem to add up when you take China out of the equation. It is hard for me to see how US producers can prosper without easy access to China.

There is also the broader scenario, detailed above, of China creating this huge free trade zone that excludes the US. Other developing countries in the BRI include India, the whole of Southeast Asia, the whole of the Middle East, much of central Asia, parts of Africa and parts of Europe. Take all of these countries out of the equation and there appears to be quite simply no way that new US capacity being added in LNG, PE and methanol etc. can find a home.

PREVIOUS POST China 25% Tariffs On US PE Imports Extended To All HDPE, Nearly All LLDPE
NEXT POST Turkey Crisis: Implications For Polyolefins And Global Economy