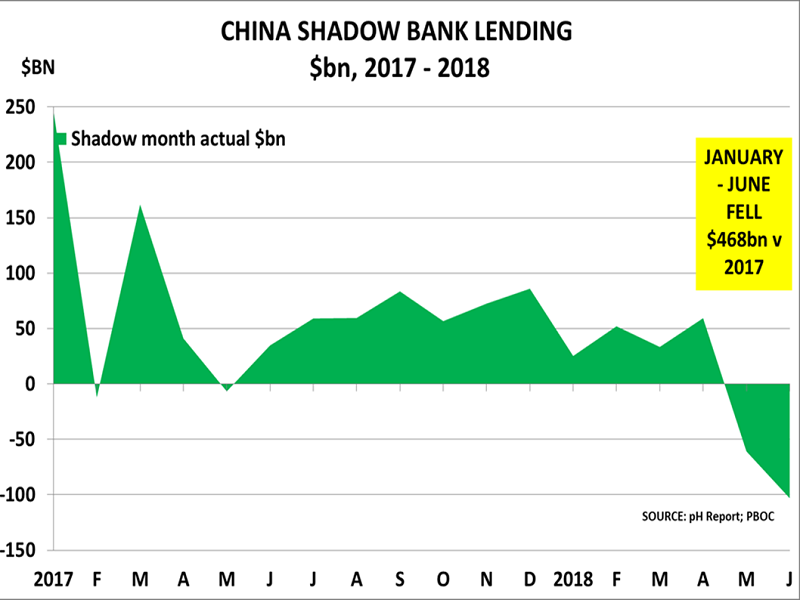 EVER since 2008 there has been been a fantastic “put option” which has made the fortunes of many financial and commodity market investors. This involved assuming that every time bad economic news emerged, central banks would ramp-up economic stimulus. Perversely, the worse the news the better the prospects of further oodles of very cheap credit to bet on stock markets, crude oil and iron ore etc.

Meanwhile, banks also found themselves in a position that the worse the economic news became the lower the interest rates. They thus had to search for yield by taking riskier and riskier bets to compensate for these low lending rates.

Companies, too, became caught up in this Alice in Wonderland, Through the Looking Glass world. Even if CEOs harboured doubts about the wisdom of new investments, they kept quiet because of the availability of cheap finance and the belief that what the central banks were doing was working in turning around the real economy.

Did all the US shale oil and gas companies that built plants adequately take into account the risks ahead of the 2014 collapse in oil prices ? I doubt it.

I have long worried that the same applies to some of the new US polyethylene (PE) investments. The risks of not building seemed greater than the risks of building, given the low cost of capital and abundantly cheap ethane (the result of oversupply in shale gas. Gas producers were desperate to get rid of huge quantities of ethane, which has no end-use market other than steam cracking).

The risks to US PE investments include the rise of populist politics and the resulting threat to free trade, China’s domestic and Belt and Road region-wide self-sufficiency drive and a collapse in virgin PE demand growth because of sustainability issues.

The biggest put option of all has been the pro-stimulus actions of the Chinese government and its central bank. This gamble might still seem very sound because of the economic stimulus measures announced by Beijing this week.

But please take a look at my updated chart at the beginning of this blog post. As you can see, shadow bank lending in the first half of this year was down by $468n compared with H1 2017 and is now back at 2002 levels, which well before China launched its giant economic stimulus package. First-half 2018 Total Social Financing, which is lending via both the private or shadow banks and the state-owned lenders, was $229bn lower.

I don’t believe that the stimulus measures announced this week and any further measures China is likely to take over the next 6-12 months will fully reverse this dynamic, for two reasons:

What of the US Federal Reserve? I think it more likely than not that Jay Powell will press ahead with interest rate increases in H2 because of a.) The need to demonstrate Fed independence following Donald Trump’s comments about his disapproval of higher interest rates, and b.) Likely strong US GDP growth in Q2 and rising inflation on higher oil prices.

This suggests that the central bank put option is no longer as strong as it used to be.

There are a myriad risks ahead as central bank stimulus unwinds as Paul Hodges, in the latest issue of his PH report, highlights in detail.

These include the some $2.5 trillion of emerging market debt that needs to be refinanced by the end of 2019. In the Alice in Wonderland world of the search for yield, the flows into emerging market debt have led to some scary anomalies. Take this example highlighted by Nicholas Spiro, partner at Lauressa Advisory, in an article in the South China Morning Post:

At the end of last year, dollar-denominated sub-investment grade corporate bonds in developing economies were all the rage, so much so that the gap, or spread, between the average yield of the high-yield component of JPMorgan’s benchmark Corporate Emerging Market Bonds Index and its United States equivalent had fallen deep into negative territory.

In other words, emerging market junk bonds were yielding less (and were therefore considered a safer bet) than speculative-grade American corporate debt.

Perhaps the canary in the coalmine, the trigger for another financial crisis, will be US dollar offshore debt incurred by emerging market corporates. As interest rates rise and as the dollar strengthens we might see an echo of the 1997 Asian Financial Crisis. Emerging-market companies may default on their debts, resulting in panic across financial and commodity markets.

Other risks include an acceleration of the global trade war. The truce between the US and the EU was greeted as great news yesterday. But the agreement only amounted to an agreement to hold talks about reducing trade barriers, with evidence of previous US-EU free-trade talks suggesting that this will be a tortuously difficult process.

President Trump also has a habit of changing policy direction multiple times in one day, which is obviously a threat to the truce. Even if the halt in hostilities holds, maybe this is because president has decided he can’t fight too many battles at once. The deal with the EU could give him more leeway to increase pressure on his main trade target, which is China.

I could be wrong of course. The central put option may remain a valid investment strategy for many months to come. After all, it’s already worked incredibly effectively for almost ten years.

But it feels to me like the risks are building. At some point we are bound to suffer another major financial and commodities market correction. And when it happens, we will have to deal with the vast debts built-up because of the search for yield. When will the “when” happen? Before the end of this year seems a distinct possibility.