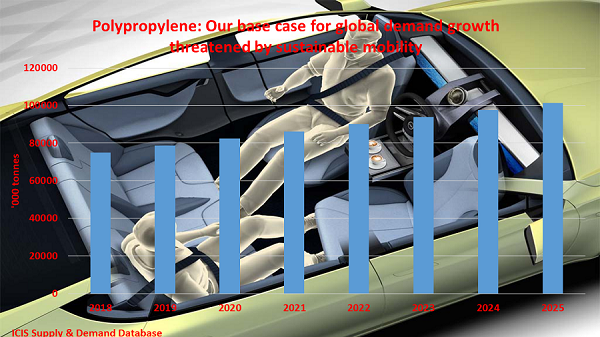 ENVIRONMENTAL concerns over wasting the earth’s resources are one factor behind the rise of Uber and other ride-hailing services as a replacement for car ownership in cities.

But in heavily congested cities, large several-tonne lumps of metal and plastic still spend a lot of time in traffic jams, even with clever routing thanks to the internet. This helps explain why Uber sees more growth in hiring electric bikes and scooters than car hailing.

How quickly will this develop? You might think that your polymers business is safe for at least ten years. But look at how quickly Uber and other ride-sharing services have grown.

And over the next ten years I am convinced that we will see major breakthroughs in autonomous vehicles. This would further dent polymers demand in the autos sector as it will become safer, as well as more sustainable, to hire rides via your mobile apps than own a car.

There is also the time-saving factor. Instead of being stuck behind the wheel of your car in traffic jams, you can get on with important work or leisure as your autonomous vehicle takes you to your destination.

Back to the environment. Even better if the autonomous vehicle you hire has an electric rather than an internal combustion engine.

The history of how technology followed social trends

The technology for a mass breakout in autonomous vehicles is not available yet. Yet to also be commercially proven are super capacitors to replace lithium-ion batteries in electric vehicles.

Ethical concerns abound over the cobalt needed to make lithium-ion batteries. Further, the batteries are heavy, throwing-up particulate matter from roads that adds to air pollution.

But technology has always followed social trends. Think of the early days of the polymers industry in the 1950s in the US.

The US had won the Second World War economically as well as militarily. During the 1950s it accounted for no less than one-third of global economic output.

The word suburbs entered the English language. Because rich Americans owned cars, they started moving from the city centres to the suburbs. This meant that they had to travel many miles to and from work. Women were also joining the workforce in record numbers.

Americans became cash rich but time poor. They could no longer afford to visit the shops every day for groceries. So supermarkets were invented.

US refineries made the fuel for the cars. The naphtha, again from the refineries, made very cheap ethylene because all prices in dollars of today were very low.

You had a cheap raw material to make the polyethylene to make the plastic film – and you had a tremendous demand-pull as supermarket shopping boomed.

This led to the innovation in polymer catalysts that created higher-value PE and other polymer products to meet the demands of the modern-day lifestyle.

And as car ownership soared, first in the US, next in Europe and now in the developing world, polymer consumption boomed as more and more polymers replaced metal for cost and fuel-efficiency reasons. This, too, was enabled by the polymer scientists.

It wasn’t of course in just the chemicals and polymers industries where innovation was driven by social trends. The same applied to all the essential and non-essential gadgets of modern life, from the auto to the washing machine to much more recently the smartphone.

A major change in social trends

Why the US was so economically successful after the Second World War was because it hadn’t suffered the devastation that had occurred in Europe and Asia. Its bridges, roads, and other infrastructure was still in place.

Further, it was at the epicentre of the Babyboomer explosion in birth rates that included Europe as well.

This was a period when anything felt possible, when there seemed to be no limit to consumption growth. This was because very youthful populations created constantly strong economic growth, barring a few short and very mild recessions.

Environmental concerns were also much more muted then they are today. We didn’t have the science to fully understand the risks to human health from air pollution, and we were far less certain about the link between burning fossil fuels and global warming.

Now everything has changed. We have ageing populations in the West. As people grow older, they naturally become more cautious, more conservative and more risk-averse.

Meanwhile, fewer young people means lower demand for polymers and everything made from polymers.

Environmental concerns are paramount. We are moving into an era of “less is more”, of the value of the environment and society over consumption just for the sake of consumption.

Is this just a developed-word phenomenon? Not at all. It is true of course that auto ownership is soaring in China and India etc. But they are not immune to the environmental pressures.

China faces an existential environmental crisis. A key part of fixing the crisis will be moving to electric vehicles and autonomous driving, supported by heavy state subsidies.

These new social pressures explain why effective technologies for autonomous driving will come along. So will big improvements in lithium-ion batteries, and/or major commercial breakthroughs in super capacitators.

But this clearly might not happen because of changes in mobility (and also because of the plastics rubbish crisis, which is again the result of rising environmental concerns).

Breaking this headline data down, if you look at global consumption during all the years between 2018 and 2015, this will total 706m tonnes. Around 30% – some 206m tonnes – will be in the develop world where the threat to consumption from changes in mobility might seem the greatest.

But do not underestimate the potential for the remaining 70% of consumption in the developing world – 500m – being eaten away by changes in mobility. This is especially so when you consider that China alone will account for 38% of all the world’s total PP consumption in 2018-2025.

The polymer industry clearly needs a “less is more” approach which will be the complete opposite of the old approach of more, more and more. This will be the subject of a future blog post.

PREVIOUS POST Polyethylene versus polypropylene: Expect the unexpected
NEXT POST US and China heading towards a new Cold War