Plastics Rubbish Crisis: How To Pick The Winning Polymer Producers 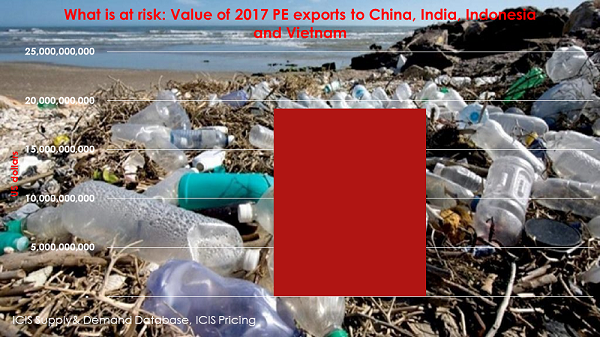 IT IS FIVE years from now. You are rich because you live in the developed world. It is first thing in the morning. You take your rubbish (or trash as the Americans say) into you backyard and place it in a series of bins where you separate not only recycled from non-recycled waste, but also different types of plastics into different bins.

Big print labels on consumer goods, indicating different grades of polymers, have made this easier. So has the redesign of packaging following close work between the polymer companies, the brand owners and the retailers. What was once packaging made from multiple layers of different polymers is now very often made from just a single polymer.

And of course your local government has provided you with the bins and the recycling collection and processing system to in the first place make this  separation of rubbish possible.

You then leave for work, not forgetting to take with you your re-usable coffee cup made from polycarbonate or good old-fashioned ceramics. There has been a complete ban on disposable coffee cups made from polyethylene (PE) bonded with cardboard, as these were almost impossible to recycle economically and so were dumped in landfills.

Some of your friends haven’t bought re-usable coffee cups. When they visit their favourite espresso bars, they instead buy coffee in cups made from one polymer only – polypropylene (PP). These are 100% recyclable. The debate you have had with your friends is: What has the lowest life-cycle environmental footprint – the re-usable coffee cup or the disposable one?

Everywhere you go in your rich-world life there is further evidence of reduced consumption of single-use plastics. High-density PE shopping bags are only a memory following a complete ban across the Western world. Supermarkets have plastic-free aisles where polymer companies have been unable to redesign end-use applications to allow recycling. These applications have been replaced with other materials such as aluminium and paper.

Fantastic. So this means we have seen a big decline in the around 1 million seabirds, 100,000 sea mammals and a much bigger number of fish that used to die from plastics in the ocean every year? No. Does this mean that the volume of micro-plastics finding its way in the food chain has been drastically reduced? Again, the answer is no, I am afraid.

The reason is that whilst the developed world has gone into recycling overdrive, far too little has been done to resolve the problem of single-use plastic waste in the developing world.

Whilst Western polymer companies have redesigned local packaging to make it more recyclable and have built new domestic manufacturing chains centred on recycled plastic, they have continued to export many millions of tonnes of polymers to the developing world with an “out of sight of mind” approach.

Once polymer pellets have left the factory gates for China, India, Southeast Asia and Africa etc., the companies have continued to take little or no responsibility for the final destination of their products.

The final destination has often been rivers and oceans because billions of people in the developing world still have no access to any kind of rubbish collection system. Nobody collects their rubbish for them. They have therefore no choice but to dump plastic into the open environment.

Wind the clock back to today and a recent study puts the challenge into perspective:

Separating the Winners from the Losers

In reality, this will not happen. Western public awareness of the scale of the plastics-rubbish problem in the developing world will make “out of sight out of mind” an unviable strategy.

Legislators in the West will respond in line with public opinion. They will design rules and regulations – backed up blockchain or other technologies – to ensure that polymer producers have to take responsibility for every polymer pellet that leaves their factory gates, regardless of the destination.

Governments in the developing world will also step up efforts to reduce plastic in the natural environment. They too will target Western polymer companies that don’t take their fair share of responsibility.

If you are an investor in a polymers company, you must therefore use this post as a guide to identify tomorrow’s Winners and Losers.

The Winners will be the companies that are ahead of the curve, the ones already engaged in redesigning packaging, in exploring new manufacturing chains built around recycled plastic – and in working with developing-world governments to establish plastic collection and recycling systems.

Take Borealis as an example  of a company taking the right approach. The global PE and PP producer has linked up with Systemiq, a Circular Economy advisory and investment company, to establish a rubbish collection and processing system in in the city of Muncari, Indonesia.

Because of minimal waste services, the majority of citizens of this coastal city are forced to dump their waste directly into the environment.

The project aims to hit zero leakage of waste into the environment by ensuring waste collection services are available to all households and businesses through increasing pick-up points, sorting facilities and staff. Efforts are also being made to increase plastics recycling.

New jobs in waste management are being created, with the other economic benefit the reduced impact of mismanagement of rubbish on local public health, tourism and fisheries.

Schemes such as this will of course be judged on their efficacy by regulators. The future polymer Winners will be those who get these schemes right and so avoid outright import bans or environmental taxes levied on polymer trade to the developing world.

PE will be the most obvious target because 56% of global PE demand goes into single-use packaging. In the case of PP, the scale of the threat is less as only approximately one-third of its final uses are into instant throw-away plastic. But it is still very significant.

So, using the ICIS Supply & Demand Database and ICIS Pricing data, let us try and gauge a ballpark financial risk:

This is just selective, of course, as it misses many major emerging market importers.

You need to worry about trade wars. Building or operating an existing plant in the wrong place in the world may result in you being excluded from exports to most of the developing world.

The same strategic focus also needs to be placed on the financial disruption from the public backlash against plastic waste, particularly in the case of PE companies.

The traditional assessments for success in polymers – feedstock advantage, reliable technologies and cheap and efficient logistics – no longer tell the whole story. You need to add to this success in adapting the global plastic rubbish crisis.

PREVIOUS POST US Risks Losing Access To 82% Of Global PE Consumption Growth, 80% Of Exports
NEXT POST Chinese PE Tariffs Come Into Effect: The Impact On The Global Business