Polyethylene versus polypropylene: Expect the unexpected 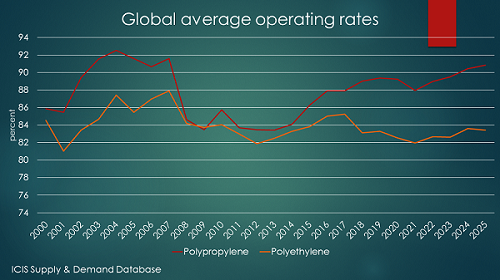 IT IS supposed to be a tale of two polymers with these very different fortunes: Whereas our base case assumes that global polypropylene (PP) operating rates will average a healthy 89% in 2018-2025, we see polyethylene (PE) capacity utilisation at 83%. The higher the operating the stronger the profitability.

The reasons why are very well known. Lots of ethane crackers are being built in the US which make mostly ethylene with most of the ethylene then used to make PE.

This could lead to a shortage of propylene, with propylene going from a balanced position to a balanced-to-slightly-tight position over the next few years. Lack of propylene would make it harder to add new PP capacity.

Next comes the demand story. As PE supply rises, it is the most vulnerable to demand destruction resulting from rising public and so legislative pressure over the plastics rubbish crisis.

Meanwhile, the growth of PP demand has been nothing short of spectacular. The polymer scientists and the techno/commercial marketing teams have achieved quite stunning PP demand growth over the last 20 years.

PP has replaced other polymers in a wide range of durable applications, with light-weighting of vehicles in the autos sector a major driver of PP growth.

This kind of analysis, while valid as a base case, needs to be overlaid with multiple layers of alternative outcomes.

PE producers friendly with China will have an edge

PE is heading for major oversupply in the midst of a trade war, with US producers possibly forced to sell at very low ethane-to-PE margins rather can cut back on operating rates. Their decisions could be driven by the need to maintain natural gas production.

It is thus possible that PE operating rates will go below the 83% that we forecast for 2018-2025 as naphtha-based producers in other regions face intense pressure from competitively priced US exports.

Alternatively, looking at PE operating rates on a global basis may no longer be valid as global trade breaks down. Imagine a scenario where the world splits into just two trading blocs. This could lead to these outcomes:

How sustainability can boost PE growth

Another layer of complexity is the loss of PE demand in “nice to have but not essential” packaging applications versus its value in raising food production.

PE consumption for plastic irrigation pipes and agricultural films is enjoying very strong growth in the developing world. In India, for example, agriculture-driven growth is so strong that our base case – India PE demand rising by 8% in 2018 over 2017 – may turn out to be too conservative.

Then comes the extent to which the PE industry is successful in persuading the general public and the legislators that some packaging applications are essential. Multi-layer PE films used to preserve food for longer is one obvious example.

If producers can demonstrate that there is greater societal and environmental value from preserving the use of these films than replacing them with alternative materials, then PE demand will be protected. Consumption can even benefit as more and more people understand the benefits of wrapping food in multi-layer films.

If food waste could be represented as a country, it would be the third largest greenhouse gas emitter behind China and the US. Rotting food produces methane, which is 20 times more potent as a greenhouse gas than carbon dioxide.

Approximately $1 trillion of food is lost or wasted every year — accounting for roughly one-third of the world’s food. According to the UN Food and Agriculture Organization, reversing this trend would preserve enough food to feed 2 billion people — more than twice the number of the world’s undernourished people.

PE producers can also protect and add to their demand by taking full life-cycle responsibility for their resins.

Blockchain technologies can track each plastic pellet all the way from the factory gates to the landfill, the incineration or pyrolysis plant or to the recycling factor.

Forward-looking PE producers, such as Borealis, are already investing in building rubbish collection systems from nothing in the developing world.

The old cliché is that that nature abhors a vacuum. So do petrochemicals companies and their investors.  PP operating rates that are forecast to rise to a peak of 91% in 2025 seem bound to attract yet-to-be-announced PP plants. In time-honoured tradition, too many PP plants could well be built.

The world is also awash with propane, creating the big temptation for lots more propane dehydrogenation plants that make propylene and then PP.

Under pressure naphtha cracker operators could see more opportunities in PP than in PE because of competition from the US. They might thus cut back on PE production to add PP.

A heavy focus of Saudi Aramco and other refinery giants is as a result on using refinery output to make greater quantities of petrochemicals.

Our forecasts for PE and PP demand are based on a stable global economy. But that isn’t going to happen because of the trade war.

The tightening cycle by the world’s central banks will also lead to a major contraction in emerging markets growth. This will highlight the problem of the vast build-up in debts since the Global Financial Crisis. Since 2008, emerging markets debt has doubled to $3.6bn.

If and when global economic growth declines then non-essential purchases will be cut back. PP’s greater reliance on durable rather than non-durable end-use applications would then become a liability rather than a benefit.

We are not living through just another normal economic cycle. Since 2008, the world’s central banks have engaged in unprecedented economic stimulus in an attempt to print babies.

But you cannot print babies. Without a change in government policies, and there is no sign of that change happening, ageing populations in the West and China threaten to make the reckoning with all this debt a lot more difficult than it would have otherwise been.

This is perhaps a bigger threat to PP because of its greater exposure to discretionary spending on durable goods.

PP and sustainability: There is a difference between “should and “will”

It might well be true that PP is economically and technically harder to recycle than PE. From this basis, you may believe that PP packaging applications will see less than demand erosion than in the case of PE. But there is a difference from what should happen compared with what will happen.

Human emotions followed by legislation that doesn’t make sense economic and scientific sense could play a big role. “OK, you can’t recycle PP so let’s ban it from packaging applications” could be the result, even if replacement materials are not as good.

There is also the constant creep of competition from other materials, including PE and aluminium and paper.

PP producers may suddenly discover that they have lost a big share in packaging markets because of perfectly good alternatives that have been developed through close work between retailers, brand owners, PE and aluminium and paper producers in redesigning packaging.

PREVIOUS POST US/China trade war will escalate even if new tariffs are delayed
NEXT POST Rise in sustainable mobility on new social trends: Impact on PP