Guest blogger today is again Ajay Parmar in the third of his posts. He is a chemical engineering professional with 5 years of industrial experience in oil refining, primarily in a process engineering capacity. He joined ICIS in 2018 as a Senior Analyst and currently works on developing a price forecasting model for crude oil and refined products. 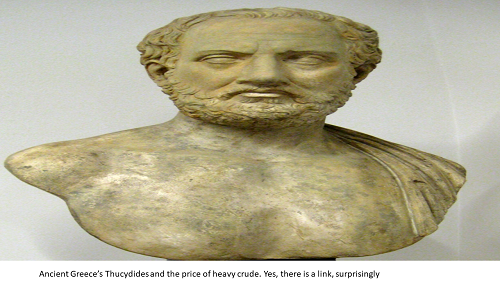 ANCIENT GREECE gifted the world with a plethora of figures and leaders that continue to influence our modern world today. One of those most overlooked from this flock is Thucydides – an Athenian whose accounts of the 5th century war between Athens and Sparta have earned him the status of the world’s first scientific historian.

The premise of the Thucydides Trap, named after the celebrated historian, is the concept that when a rising power looks to overtake the incumbent superpower, the result almost inevitably leads to war.

The contemporary subjects of our modern day Thucydides Trap are China – the rising power, and the US – the incumbent global superpower. This time though, the war in question is not a military one, rather one of economics.

In recent years this rivalry has come to a head, with the US recently declaring a trade war on China which has escalated over many months.

The potential impact of this trade war on oil markets is stark: China, which was once the world’s largest buyer of US crude, has significantly reduced its WTI crude oil imports from the US since the trade war began to heat up.

But the impact of the trade war on the oil market extends far beyond the breakdown of oil trade between these two great powers. The true price to be paid for this war is reduced global oil demand, due to a slowdown of global GDP growth stemming from the consequences of this war.

The IMF estimates that the trade war could cost up to $430 billion globally. That’s a huge weight for the world economy to bear and is bad news for oil prices because GDP growth and oil demand have increased in almost perfect tandem since the recovery from the Great Recession began.

Given the stream of recently released pessimistic economic data across key demand regions (February’s China PMI reading was in negative territory again), there exists a real risk to global crude demand in the near future.

Recent US policy has not only affected crude demand though – its recent geopolitical interventions have had a substantial impact the supply side too. Last year, the administration managed to convince Saudi Arabia not to continue its original set of OPEC+ cuts – a favour that the Saudis provided in return for the US withdrawal from the Iran nuclear deal earlier in the year.

US sanctions on supposedly rogue nations’ oil trade have ensured ample quantities of Venezuelan and Iranian heavy oil have been removed from the market already, with further supply cuts hanging in the balance.

On top of this, Canada has recently removed significant quantities of heavy oil from the market, Saudi Arabia plans to cut deeper in March and Russia has confirmed that it will drop production further in March/April, both in line with their OPEC+ production cuts agreement.

This mass removal of vast volumes of heavy oil contrasted with record-breaking US shale oil production has led to light, sweet oil being the main driver of global oil production growth. This impacts the market in a plethora of ways – one key effect being the shrinking Dubai/Oman-BFOE crude price spread.

Historically, the heavy Dubai/Oman oil benchmark has been priced lower than the lighter, sweeter BFOE benchmark, but this differential has diminished in recent months, leading to almost parity between the two benchmarks.

The ultimate consequence of this is higher oil prices for those refineries that require heavy oil as part of their crude slate (such as US refineries). In other words, the foreign policy of the US government (and others), is depressing US refining margins.

Despite all of this, the US is not yet able to influence markets in the mechanistic way that OPEC manages to. This will likely never be the case, as OPEC production far exceeds that of the US and will continue to do so for at least a few decades.

OPEC is oil’s price setter and the US, as the world’s largest producer, is a prominent price influencer, but its ability to have extensive effects on the market is currently limited. At present, US oil companies adjust production according to oil prices – once prices reach above their breakeven point, shale producers ramp up output again (largely in an effort to drawdown their large volumes of debt), whilst the US administration currently creates foreign policy with seemingly little consultation with the US oil industry.

US may never reach its full potential in oil markets

OPEC, however, adjusts policy according to supply and demand fundamentals, and implements its strategy in a much more coordinated manner. Reacting to fundamentals is a considerably more measured method of impacting the market, as it yields significantly less price volatility.

But doing this in a coordinated, gradual manner, overseen by a body which ensures cooperation of all parties involved and, crucially, is backed by each member government, is the reason why OPEC has so much leverage in the market – even more so given its recent collaboration with Russia. The US has no such approach to oil markets.

Ample evidence exists that recent US foreign policy initiatives and huge increases of US shale production volumes mean the US has colossal power in the oil markets. But its key players – the government, independent producers and oil giants all continue to function for their own self-interests.

Given the unpredictable nature of the US president, it is unlikely the US administration is going to coordinate efforts  in a similar manner to OPEC.