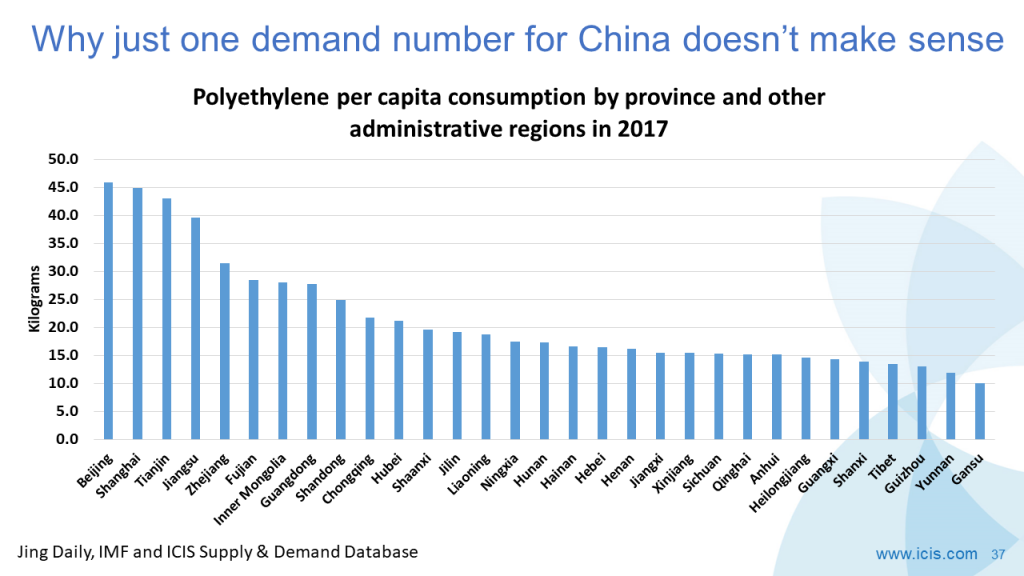 THE TOP DOWN method of estimating polyethylene (PE) demand growth in China that uses multiples over GDP seems to have major weaknesses (and some of what follows may apply to other chemicals and polymers).

The problem is with GDP itself. China’s actual and forecast official GDP growth numbers have long been understood to be unreliable as a new Brookings Institution study further underlines.

The study estimates that between 2008 and 2016, official GDP growth was 1.7 percentage points per year too high.

When this data was fed through to the central government’s National Bureau of Statistics (NBS), the NBS lacked the authority to make the correct adjustments as local government officials were more powerful.

Official GDP growth numbers before 2008 were also very unreliable, the study adds. There is no reason to believe that government data after 2016 has become any more accurate.

A further problem is that most supposedly independent numbers for China GDP never challenge the official numbers as they are usually only just a little lower.

Another difficulty is with the very nature of top down analysis, as it doesn’t take into account the end-uses for PE and how they are growing in China. Even if we could get Chinese GDP growth right, which is probably impossible, downstream demand drivers seem to bear little relationship to GDP.

Take 2018 as an example. There are no obvious reasons to believe that future years will be any different.

The sale of low cost goods over the internet, which were either made from PE and/or were packaged in PE, continued to boom despite weaker official and unofficial GDP growth.

This boom was partly driven by a rise in takeaway food sales as people cut back on more expensive restaurant dining because of the slowing economy. Takeaway food is packaged in LLDPE and LDPE films and rigid HDPE containers.

A lot of the rise in demand for takeaways consisted of food delivered to people’s homes by the Chinese equivalents of Uber Eats. This trend actually has an inverse correlation to GDP rather than being correlated to it.

Last year also saw strong demand for HDPE natural gas and water pipes as a result of an increase in government infrastructure spending.

This type of demand again seems to have an inverse correlation with GDP growth. Beijing always spends more money on subways, roads and railways etc. when growth slows.

There is another aspect of demand for HDPE natural gas pipes that has a weak link to GDP and that is switching homes and business from using coal to natural gas for environmental reasons.

The use of coal in China is a major cause of lung cancers and other respiratory diseases. China’s leaders have made a firm long-term commitment to tackle the environmental crisis regardless of GDP growth patterns.

This illustrates the point that in a very heavily centrally controlled country, government policy decisions shape PE and other polymers and chemicals markets. Central control has increased since President Xi Jinping came to power in 2013.

Another example of the role of government policy was last year’s introduction of heavy restrictions on imports of scrap or waste plastics. This boosted the demand for virgin PE even though the economy was slowing. Demand for virgin general purpose polystyrene and polyester fibres also benefited from the restrictions.

One number for China doesn’t work

Yet another problem is that conventional top down analysis tends to treat China as one country, when, in fact, it is a combination of several quite different regions from an economic standpoint. Broadly speaking, there is rich coastal China, the north eastern rust belt, the central provinces that are enjoying strong catch-up economic growth and the very poor provinces in the far west.

It may be necessary to create many more sub-groups for sensible analysis. Perhaps we need to go all the way to generating separate bottom-up demand growth numbers for each of China’s 31 provinces and other administrative regions.

Quite. Nobody would think that one PE consumption number would be good enough to take into account varying patterns of growth between Germany and poorer southern Europe.

But conventional top down analysis often assumes just one PE demand number for China. This is despite the vast differences between say Gansu, China’s poorest province and Beijing, China’s richest region. In 2017, I estimate that Gansu had per capita PE consumption of just 10 kilograms compared with 46 Kilograms in Beijing.

The potential for further growth in Gansu seems big whereas per capita consumption in Beijing may have pretty much maxed-out for basic commodity grades.

Demographics region by region are crucial to understand. For example, young people have tended in the past to migrate to the cities, meaning that people in rural areas are not only poorer but older – which has a major influence on consumption patterns.

As recently as 2009, one number for China might have been just about good enough as before then China’s PE consumption had yet to become the biggest in the world.

But from 2009 onwards China became the world’s biggest consumer, surpassing the US and the EU on an individual basis.

As for official and unofficial China GDP numbers as the basis of analysis, this has probably never been a reliable enough approach because of the weakness of the data.