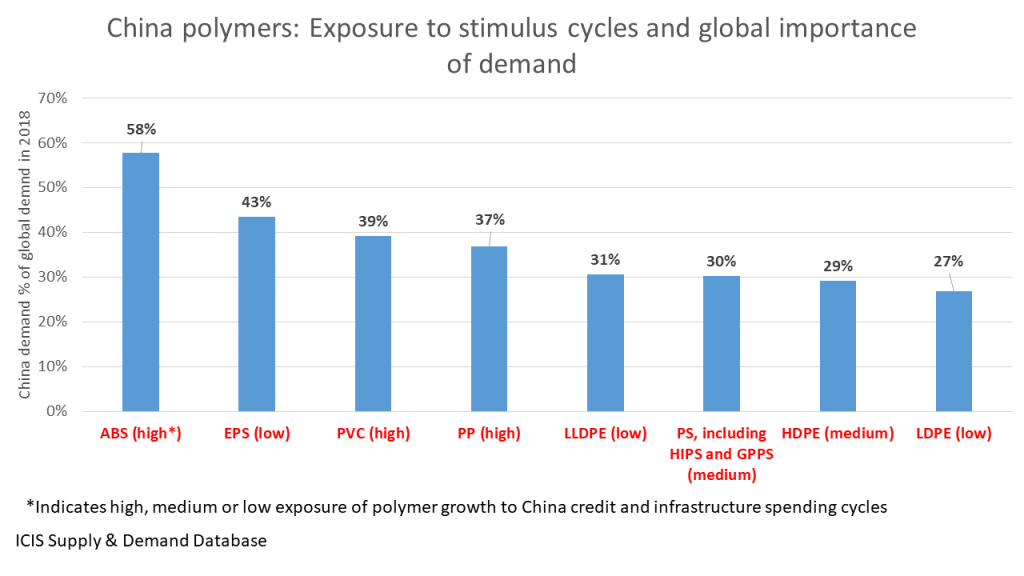 CHINA’S HUGE January credit increase might be the start of a new round of major credit-fuelled economic stimulus, was the theory I put forward last week. This would lead to a rebound in global growth and a surge in worldwide chemicals demand as global growth is about these three things: China, China and China.

Demand growth in China for polymers that go into “big ticket” durable items was weaker than had been expected in 2018 because of tight credit conditions (see my final section: Implications for chemicals demand).

We could therefore see a big rebound in demand for some polymers such as PP, which suffered from the decline in auto sales, if the January rise in lending is sustained.

But I think it more likely that that the surge in January Total Social Financing (TSF) was about panic over growing financial risks rather than a long-term return to very relaxed lending conditions. TSF is a broad measure of lending and liquidity in the economy.

January’s TSF was at its highest monthly level since the government started releasing the data in January 2002. The January TSF of Rmb4.64 trillion was one-third higher than the same month last year.

If my panic scenario is correct then January’ TSF was, as I said, just a one-off. Much of the extra credit would also be used to shore-up companies at risk instead of generating new economic activity.

The case for panic

A reason for these defaults was the big impact on private companies of last year’s 73% fall in shadow bank lending, as it is the shadow or private banks that are the main lenders to the private sector.

There are also seems to have been a structural shift in lending away from the private companies and towards the state-owned enterprises (SOEs). This is to do with politics.

In 2016, private companies received just 11% of new loans, down from 52% in 2012, according to economist Nicholas Lardy in his new book on China, The State Strikes Back. This is despite the private sector accounting for 60% of GDP growth and 90% of new employment. The shift in lending is the result of what Lardy says is greater central control of the economy since President Xi Jinping came to office in 2013.

The January flood of TSF appears to be partly about trying to redress shortages of funds for private companies. So are reductions in bank reserve requirements and government instructions to banks to lend more to private companies.

Earlier this week, Qinghai Provincial Investment Group unexpectedly missed domestic and overseas bond payments. Although payments on the bonds were eventually made, the short-lived technical default shocked analysts as Qinghai Provincial is an SOE. This was the first offshore default by an SOE in more than 20 years.

Qinghai Provincial is an aluminium and a hydropower producer and a Local Government Financing Vehicle (LGFV).

These vehicles have been used to fund China’s spending on roads, railways, subways and bridges etc. Spending on infrastructure has ebbed and flowed over the last ten years, based on whether China felt it needed to support GDP growth or tackle bad debt problems.

There was a major policy shift last July when Beijing decided to compensate for the economic slowdown by spending more on infrastructure, with the LGFVs the vehicles for this expenditure.

The January boost in TSF therefore seems to be about ensuring that other LGFVs do not default on their debts.

What if the government was right to panic in January, but there is little it can do to avoid a major bad debt crisis?

A record Rmb6.7 trillion in outstanding corporate debt is set to mature this year and will have to be rolled over, just as bond issuance increases to support more infrastructure spending.

Last July’s decision to boost spending on infrastructure came at a time when excessive investment in bridges, subways etc. was already a concern.

Take as an example subway spending in Suzhou, a city 100km from Shanghai. One subway stop sees just 100 passengers a day. Between 2014 and 2017, China accounted for 30% of global city subway rail lines but only 25% of passengers.

Before the July turnaround, Beijing had warned that some subway projects were “not based on actual needs” and had “increased the burden of local debt”.

Total Chinese debt as a percentage of GDP increased from just 162% in 2008 to around 300% in 2018. This was the result of the huge post-Global Financial Crisis economic stimulus that led to not only major spending on infrastructure, but also a property bubble and manufacturing overcapacity.

China has so far managed to muddle through without a debt-induced economic crisis. I believe it can continue to do so in 2019 if it maintains its focus on reducing bad debts.

So, of course, it will maintain this focus. This why I believe it is likely that the January TSF was a one off.

Whilst more stimulus measures have been announced since January, such as yesterday’s announcement of Rmb2 trillion of tax cuts, the government’s focus on controlling leverage means no return to the heady stimulus days of 2010. In that year, bank lending tripled compared with 2009.

“China will face a graver and more complicated environment as well as risks and challenges that are greater in number and size. China must be fully prepared for a tough struggle,” said Prime Minister Li Keqiang yesterday, during his work report to the National People’s Congress, the annual parliamentary meeting.

His comments add weight to my preferred scenario, as does Li’s announcement that official GDP growth could be as low as 6% in 2019. This would be the slowest expansion of the economy in almost three decades.

In summary, here is what I expect:

It is important to think separately about the implications for durable and non-durable end-use chemicals applications.

A lot of PP, as mentioned above, goes into durable big ticket, or expensive, applications such as autos where the slowdown in credit growth was keenly felt last year. The same applies to acrylonitrile butadiene styrene (ABS) and high-impact polystyrene (HIPS). The 2018 data for these products show demand growth less than we had forecast.

I don’t as yet have the 2018 data for PVC. But it is one of the polymers most exposed to credit cycles because of its heavy links to the construction sector. PVC is used to make water and sewerage pipes and window frames.

But general purpose PS and expandable PS had terrific years in 2018. So did, most spectacularly of all, PE where demand was as much as 1m tonnes more than we had expected. PE demand growth was at its highest level since the growth rebound following the Global Financial Crisis.

What all these three polymers have in common is that they are heavily used to package non-durable low-cost goods, including food in the case of PE. Last year’s credit slowdown therefore had no discernible effect on demand for these polymers in 2018 – and there is no reason to believe that credit availability will have any influence in 2019.

The three polymers were also boosted by the continued growth in internet sales. China has become one of the world’s most wired countries. One factor driving internet sales is the anxiety over food safety. Growth in sales of foreign food over the internet has been strong because of the severe pollution of Chinese soil and water.

These same three polymers are also used to package durable goods such as washing machines, refrigerators and TVs, the sale of which suffered in 2018 because of the credit squeeze. But loss of packaging demand for white goods and electronics was more than compensated by booming in non-durable sales.

Not all grades of PE are equal. Whilst LDPE and LLDPE are heavily used in packaging of low cost items, this is less so with HDPE.

HDPE is used to make detergent and shampoo bottles etc. But it also has big ticket durable applications in petrol tanks for autos and in, more importantly, pipe grade HDPE for water and natural gas pipes. HDPE pipe grade demand is thus vulnerable to ebbs and flows of Chinese infrastructure spending.

And, as you can – using our excellent Supply & Demand Database – I have placed this into the context of the global picture. You can see estimated 2018 Chinese consumption as percentages of global consumption.

Extraordinary. These percentages once again tell us how no other global market compares to China as a driver of demand. This why the extent of China’s credit growth in 2019 has big global implications, as is the case every year.